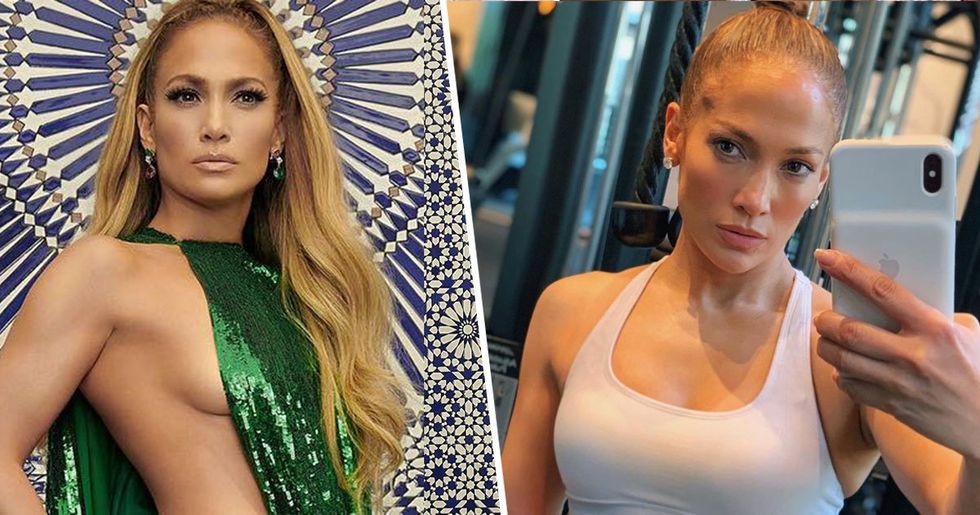 Jennifer Lopez has always been one of the nation's favorite stars. The singer, best known for her catchy R&B and pop vibes, left her forties in the past yesterday and has never looked better. She is living proof that you can look good no matter what age you are.

Her illustrious career has given us some of the best moments in entertainment history. From ruling the music world with her hit track, "Jenny From the Block," to her debut in the film industry, is there anything that this woman can't do?

Stick with us as we reveal some of JLo's beauty secrets in hommage to her making fifty look strong and sexy.

Of course you remember this look. JLo scandalized onlookers with this revealing one piece.

That's none other than Sean Combs, also known as "Puff Daddy," but he brought nothing but trouble for JLo, so we don't talk about him.

Is there anything that JLo can't wear?

As JLo stepped on the scene of the 2018 Met Gala, everyone's heads turned to watch her do her thing in front of the cameras.

We know, we know, JLo is obsessed with exposing one leg.

I think you get it, JLo's always looked great.

Now, these three rules are a crucial part of her routine.

To some, it may be a little extreme, but they really do the trick. JLo can vouch for that.

According to Lopez, she hasn't had caffeine "in years!" I wish I had that kind of will-power.

The singer expressed that alcohol really ages the skin as you grow older, so she avoids it.

And, finally, she doesn't smoke either. Smoking releases so many hazardous toxins into your body, so it's no wonder that she avoids that. It's key to her youthful and radiant appearance.

And these skincare tips will also save your skin.

According to People, JLo has been a proud promoter of glycolic acid as it helps "to get that healthy glow and clear skin."

Taking off your make-up at night also helps.

This is a tip that echoes around the beauty industry, but now that JLo has confirmed it, we need to stick to it. I get that, some days, you might be tired and your bed is calling your name, but, just think about it, when you're fifty, your skin will thank you for cleansing.

Having the right amount of sleep is also an important factor in maintaining a healthy lifestyle.

Yes, you've also heard this one before, but it's so important. Lopez ranks this at the top.

"The number one tip is to always get enough sleep. I can’t stress this enough."

"Ideally I would love to get nine or 10 hours of sleep, but either way, I always make sure I get at least eight." I mean, if she can find the time to sleep with her busy schedule, you can too!

And, lastly, we have meditation.

Going about your hectic life can be extremely tiring, so make sure you take the time to relax and center yourself!

Jennifer started meditating regularly back in 2015 and hasn't stopped since!

She told Well + Good that: "It sounds like such clichéd bullshit, but it's not; age is all in your mind," so she tells herself that she's "young and timeless" everyday!

We owe a lot to Jennifer Lopez...

From the iconic bops to the tips to help us look as amazing as her, JLo has provided us with a lot of joy. And just look at those abs! If you're not finished obsessing over J-Lo just yet, keep reading! She brought her daughter on stage with her and they sang a duet together. It's too cute - we can't stop watching!!