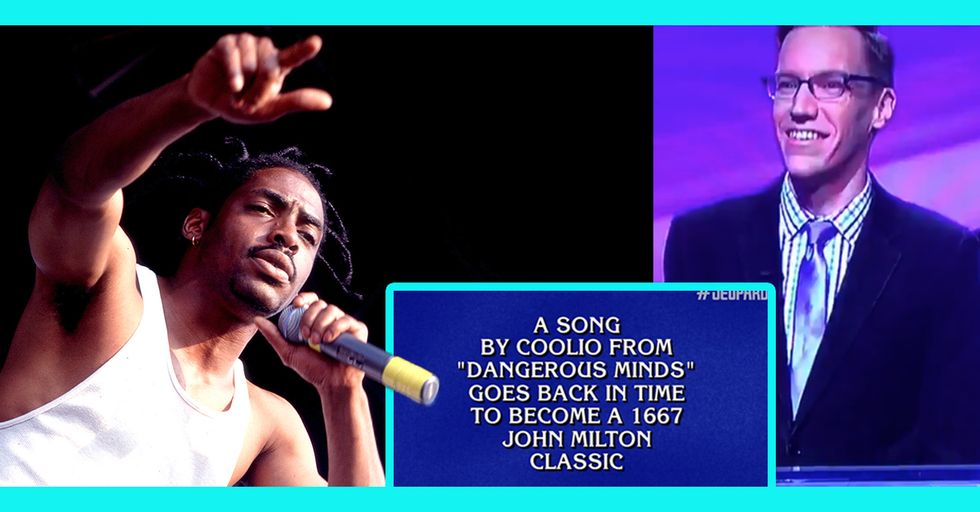 Answer: It's the greatest game show of all time in which contestants to are given answers and have to provide the question themselves.

If you said, "What is Jeopardy!?" then you are correct!

Earlier this week, a contestant named Nick may have made some kind of Jeopardy! history.

These were the contestants in 2018's very first episode of Jeopardy!.

You've got Henry, Lisa, and Nick. Today we're gonna be talking about Nick. The bespectacled fellow over there on the right. Now, let's set the scene. We're in Double Jeopardy (the second round of the game). Our guy Nick is in a respectable second place, a mere $800 behind Lisa.

The category is "Music & Literature Before & After." Here's the clue:

He buzzed in on the clue almost immediately.

Look at this guy. The guy in the photo above is a guy who is clearly confident about whatever it is he's about to say.

Nick then boldly gave his answer (or rather, his question — 'cause that's how Jeopardy! works).

"What is Gangster's Paradise Lost?" Nick proudly asked. "Yes," said Alex Trebek. Nick was right. Everything in his life had been leading to this exact moment. He was awarded $1,600 and swiftly took the lead away from Lisa.
But this is not a story about Nick and his Jeopardy! success, dear traveler. It is about Nick and his Jeopardy! fail. Before we tell you what happened next, let's just live in this moment together for a little while. Just like Nick did. He was flying high after totally nailing that Before & After question. It's a notoriously difficult category! But it was no match for Nick. Except...

A few minutes later, Trebek gave him the bad news.

Yes, it's true, dear reader. Nick had said the word "gangster" instead of "gangsta." And thus, his response was deemed incorrect.

Not only did Nick suffer the pain of being incorrect, he lost that sweet, sweet cash, too.

Remember that happy, confident Nick from the first page of this article? Well, he was no more.

This Nick is a completely different Nick. This Nick is older, wiser, more circumspect, and perhaps the slightest bit less confident about his knowledge of hip-hop and 17th-century literature.

You can watch the entire Saga of Nick here:

It's even worse in video form, isn't it? People were pretty outraged about the judges' call on this one, which led to the show making an official statement on the ruling:
According to the folks at Jeopardy!, there are two different entries in the Oxford English Dictionary — one for "gangster" and one for "gangsta." So they're officially two different words and Nick chose the incorrect one. But we have good news! Our guy Nick, despite his earlier fall from grace, was the game's ultimate winner after the Final Jeopardy clue. We like to imagine he'll spend his winnings on creating a Gangster's Paradise for himself in his back yard.