'Jeopardy!' Contestant Makes Hilarious Blunder in 'One of the Best Moments in Gameshow History' | 22 Words 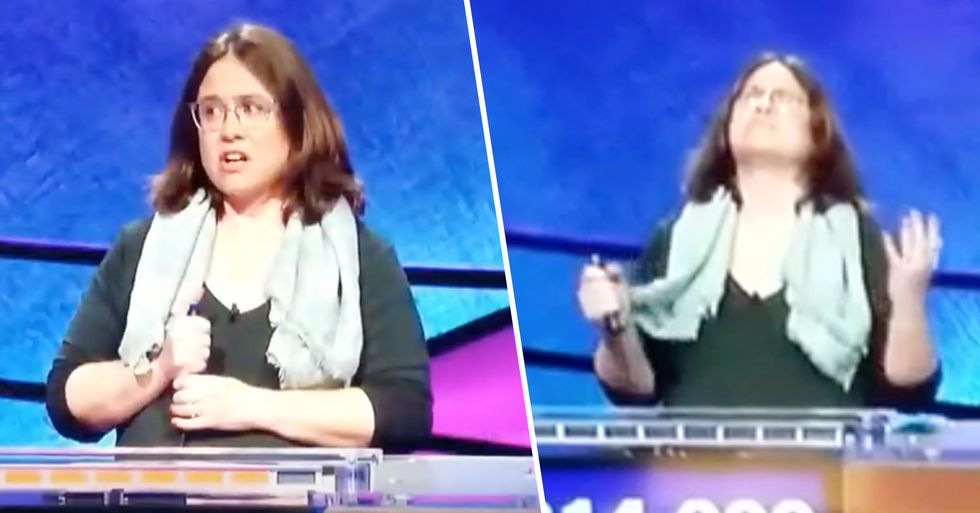 'Jeopardy!' Contestant Makes Hilarious Blunder in 'One of the Best Moments in Gameshow History'

Not only is Jeopardy! a constant in many households, but so is its host, seventy-eight-year-old Alex Trebek. The television personality has been a part of the syndicated game show since its revival in 1984. It's no secret that Trebek, has been plagued with ongoing health issues - and it seems a tragic end may be imminent.

But it seems Trebek is planning to keep on working - and this week we've been treated to a hilarious contestant blunder that has been hailed as "one of the best moments in gameshow history."

Keep scrolling for the clip...

But this week saw a brand new amazing Jeopardy! moment.

A Jeopardy! contestant unintentionally made history on the smash-hit program. Keep scrolling for the clip...

Sarah Jett Rayburn, from Hutto, Texas, defended her spot as a champion on Monday.

And at one point, she attempted to answer the $2,000 question in the category “The Zulus," as per The Independent.

Trebek then read the question, which came with a photo alongside.

“Here, as on each 24 September, Zulus celebrate the holiday that was named in honor of this warrior leader of the early 1800s."

The correct answer was Shaka Zulu, founder of the Zulu Empire in Southern Africa.

But Sarah answered "Chaka Khan" the American singer and songwriter, a blunder which hugely amused the audience. Although that wasn't the first hilarious mistake she made...

When Sarah got to the final question...

“Before they were photographed together in 1862, Lincoln wryly noted this general ‘should have no problem’ sitting still for it."

Sarah once again make quite a blunder...

She guessed Ulysses S Grant, but the correct answer was George B McClellan. "I wasn’t sure. I second-guessed myself on that one a lot," she said. “Sorry. I shouldn’t be talking now."

Trebek tried to reassure the contestant.

“No, that’s fine, you can talk now. There are people who are watching who are saying ‘Why didn’t she put down McClellan?’ and you just explained. It was your second choice."

“I was afraid. Grant seemed safer, you know what I mean? I thought – anyway, I’m sorry," to which Trebek responded: "Ladies and gentlemen, you have just witnessed something that never happens on our program: an explanation of why the contestant wrote down what they did."

And for more gameshow gold, scroll on...