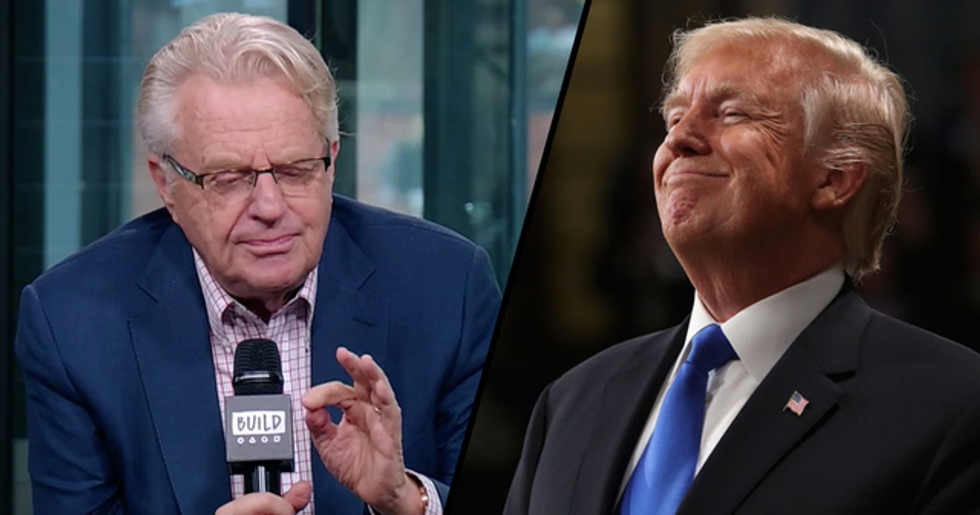 The Jerry Springer Show is out, Judge Jerry is in.

Yep, the famous Jerry Springer has left behind his days of solving (or escalating, in most cases...) family feuds, and is now sticking his fingers into the hot pie of American politics. His new daytime show, Judge Jerry, sees the famous host rule on a range of legal disputes.

And, in an interview to promote his new show, which has a disappointing lack of the classic Jerry Springer boxing matches, Jerry opened up about his thoughts on President Trump and, let's just say, they're not pretty.

Keep scrolling to watch the full interview, and to hear what Jerry has to say on the 2020 elections.

The Jerry Springer Show is a staple part of American television.

Tasteless talk shows come and go, but The Jerry Springer Show has remained a firm trash-TV favorite for decades.

And it was consistently a major success, right up until the last episode aired last year. The show consisted of the host, Jerry, interviewing a variety of guests on their various family or relationship issues. Moms sleeping with their daughters' boyfriends, dads getting the DNA results of their fourteen children... You get the gist.

And the show became famous for its frequent brawls.

Regularly, a second guest whom the first guest wanted to challenge would be brought onto the stage. And, with the iconic "ding-ding-ding" of the wrestling bell, the guests would subsequently break into vicious, yet quite amusing fights that would require the swift assistance of muscly security guards.

The show has been criticized for glorifying violent behavior in the past...

And people blame it for the rise in the type of reality TV that dominates our screens today. However, Jerry has defended the show, and insisted that it isn't that simple; “The culture has not changed, the behavior is the same," he said. “A thousand years ago people gathered in the marketplace, in the town square, and they would all chat about what their neighbors were doing, who did what, what the gossip is, what the scandal is..."

He insisted that his show is simply showing what has happened in societies for years...

And that it is modern technology that has started the new type of trash-TV, not his show. "Everything that has ever been on my show is already in the Bible, is already in Shakespeare, is already in great literature. Everything." he explained. “What has changed in the last 50, 60, 70 years is technology. So we talk more about what the Kardashians are doing than the people down the block ... The behavior hasn’t changed. It’s just that we’re announcing it to the world."

But now, rather than resolving trivial family disputes...

Jerry has opted to solving things of a more political nature in his new show, Judge Jerry.

Judge Jerry premiered only a couple of days ago.

And, in a similar nature to his original show, it sees Jerry, who is now seventy-five, help to solve various family disputes, simply in a more formal and political manner. A.K.A, there will be no more fist-fights or weaves getting ripped out.

But this isn't Jerry's first time dabbling in the world of politics.

Believe it or not, Jerry led a very different life before his Springer Show days. Jerry graduated from Tulane University in 1965 with a degree in political science and went on to obtain a second degree in Law 3 years later in Chicago.

Jerry was the Mayor of Cincinnati.

Quite unbelievably, the crowd-chanting Jerry Springer that we all know and love actually served as the Mayor of Cincinnati in 1977 for a year.

Jerry has always been a liberal.

Springer hosted a talk-radio show for a year in Cincinnati, which was a very liberal show and was even syndicated into various other Midwest cities. And, even after he put his political career behind him, Springer would regularly appear on television programs to espouse his liberal philosophy.

And he has long been a vocal Obama supporter.

The host even met with the then-president back in 2012 just before his re-election at the Cincinnati Music Hall ballroom, an experience which he described as "truly exceptional."

And Springer wasn't shy to voice his approval of Obama.

“I was honored to meet with President Obama and felt the meeting was substantive," Springer told the Huffington Post shortly after his meeting. “He’s so competent and so smart, I just don't see why we wouldn't want him for four more years as president."

The self-proclaimed “very liberal" TV star recently gave an interview with BUILD Series to promote Judge Jerry, and got into the topic of the 2020 Presidential elections. On the topic, he claimed that he’s “satisfied" with the Democratic presidential candidates, singling out Sen. Kamala Harris in particular.

He isn't the biggest fan of our current president, the overtly Republican Donald Trump.

Springer had a lot to say about the president.

And he believes that the key to the Democratic Party's success in 2020 is to keep the focus on Trump’s weaknesses. “From a purely political point of view, I think we have to be careful," Springer said. “I think as long as Trump is the issue, the Democrats can win. But if we pick a candidate who all of a sudden takes the spotlight off of Trump and ‘is this person too far left?’ and suddenly the debate moves in that direction, then I think we could lose the election again."

He had some strong words about who he'll be voting for in 2020.

And he boldly said that he would "rather vote for a ham sandwhich" than President Trump. Round of applause for Jerry Springer, anyone?

And he thinks that Trump's televised antics over the last couple of years look awfully familiar...

Because they remind him of his own show. “The thing that annoys me about Trump is that he took my show [The Jerry Springer Show] and brought it to the White House," Springer exclaimed in the interview.

And he thinks that he deserves some credit for Trump's ludicrous antics.

Where he discusses his new show and his current political stance.

Who else wants to see Trump on The Jerry Springer show?

But, in all realness, Trump has been involved in some very Springer-style scandals. Like his infamous fall out with Greenland's Prime Minister. Basically, Trump threw a tantrum when he wasn't allowed to buy Greenland. I know, quite ludicrous, isn't it? Keep scrolling to hear the full story, which would make a fantastic episode for The Jerry Springer Show...