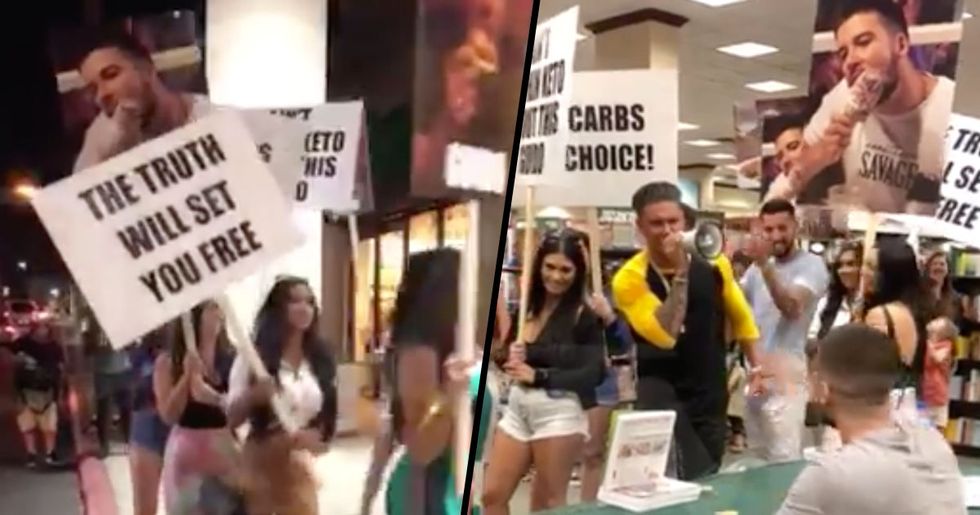 Let’s all openly admit it: MTV’s juggernaut Jersey Shore was a rare gift and we didn’t deserve it. Whether you loved it or hate-watched every episode, it’s undeniable that Jersey Shore changed the landscape of reality TV forever, not to mention the common vernacular.

Since the announcement of a cast reunion for the limited-run series Jersey Shore: Family Vacation, we’ve been wondering where the Snookies and Situations of the world have been hiding? The latest sneak peek comes in the form of drama at Vinny's Keto book signing.

21-year old Nicole “Snooki" Polizzi was the breakout star of Jersey Shore, who put us in touch with our inner meatball problems. She was also the victim of a brutal punch to the face in a shore bar by a MALE gym teacher – a punch that galvanized the group into one solid, Snooki-loving entity. The rest of America followed suit.

Snooki, who prefers to go by Nicole these days, is still the same bronzed, big-haired guidette that we know and love. But she’s taken her ridiculous antics to the smaller screen, starring in a YouTube series with her BFF Jenni “Jwoww" Farley, along with hosting a podcast. 30-year old wife and mom of two, Snooki has rebranded herself into a tiny, tan powerhouse, establishing her brand in clothing, craft, and book lines.

Known for her ride or die loyalty to BFF Snooki, and her tendency to pee in parking lots, 23-year old Jenni “Jwoww" Farley was the first gal to take a gander at Pauly D’s weiner and say, “No thanks, dude." Her throwdown with Sammi also catapulted her to fame, or at least to the titleholder of baddest bitch in the Shore House.

31-year old Jenny is no longer married to long-time partner, Roger - in May 2019, she was reported to be seeing someone new - and she's also a mother to two adorable kiddos. She lives near Snooki (of course) and has tried her hand at writing and developing clothing lines, as well. Her YouTube show, “Snooki & JWOWW: Moms with Attitude" teaches women everywhere how to make crafts for a 4-year old’s birthday party while simultaneously rinsing out your hair extensions in the tub.

27-year old Mike “The Situation" Sorrentino taught us all the value of jumping on a grenade in the club for your friend. A core member of MVP (Mike, Vinnie, Pauly), he was best known for yanking up his tank top to show strangers the “situation" underneath. Oh – and also headbutting himself into a neck brace.

After a cringe-worthy fizzle on Dancing With the Stars, Mike has been in and out of the limelight, mostly for battling his addictions and his financial shadiness. Indicted by the Dept. of Justice in 2014 and 2017 on tax fraud, Mike was definitely in a rather messy… situation. At least he reports being sober today, which is a huge step in the right direction. He’s also back with his college girlfriend, Lauren Pesce, who he married in 2018.

Ronnie Then: Shirtless on a beach.

23-year old Ronnie Ortiz-Magro gave us three everlasting gifts: One half of the most toxic relationship ever, a hearty giggle, and the recipe for Ron-Ron juice. What more could we ask for? This man has done enough.

Although not together with Sammie anymore, 32-year old Ron is still a hopeless Reality TV romantic. He “fell in love" with Malika Haqq (Khloe Kardashian’s BFF) on day one of their stint on Famously Single. But he’s single now and ready to fall in love within 2.5 seconds of returning to the Shore House this year! He’s also ready to throw 100% of people’s shit out of the window if necessary, which is why we love him.

The other half of Ron-and-Sam, 22-year old Sammi “Sweetheart" Giancola, was proclaimed herself to be “the sweetest bitch you’ll ever meet." She was also the guidette that launched a thousand fights between Ronnie and Mike, who were both vying for her attention season one.

The only Jersey Shore cast member not appearing on the 2018 reunion, 30-year old Sammi is in a new relationship with some dude she calls her “soulmate" after having broken up (for good? for now?) with Ron in 2014. Something tells me this new “soulmate" might have something to do with Sammi not appearing on the show. After all, Sammi plus Ron, plus one Smush Room equals trouble.

28-year old stats: Questionable haircut. DJ. Pauly “D." Delvecchio coined as many Jersey Shore phrases as there are stars in the sky. Or t-shirts in the Shore Store. From Cabs Are Here! to T-Shirt Time!, Pauly D. has given us more than we can ever repay him for.

37-year old stats: Still questionable haircut. DJ. He also appeared in a few Reality TV shows and dated Aubrey O’Day. Most important fact: He’ll be single for the reunion, along with Vinnie and Pauly. So…GTL anyone?

The youngest (and sanest) member of the cast, 21-year old Vinny Guadagnino was a mama’s boy with a heart of gold. That wasn’t to say he didn’t know how to “beat up the beat" and troll the clubs for women who were DTF, however. He could roll with the crazies and still come out clean on the other side, though. Um, except for that time he got pink eye from sticking his face into some random chick’s arse.

After leaving the show in season five due to anxiety, 30-year old Vinny has written a mental health book entitled “Control the Crazy," is taking acting classes, appeared in cameos in some TV series, and developed a show on The Cooking Channel with his mama. Because, of course he did! He’s also trying his hand at stand-up these days, something that may come in handy when he finds himself back the mix of MVP again.

She came, she saw, she meatballed. A late addition to the series, 24-year old Deena Cortese came stomping into the Shore House season three. Joining Snooki in baring her thong in the club while amped up one too many Ron-Ron juices, Deena was a fun-loving, no-drama kind of gal then…and now.

30-year old Deena is still a little ball of fire, who uses her boundless energy as a dog trainer these days. Now married, Deena has done a few minor stints on reality TV, including the dreaded Couples Therapy that all D-listers eventually find themselves on.

Angelina WHO? Oh yeah – that 22-year old chick who called herself the “Kim Kardashian of Staten Island" and got booted off the show season one for being insufferable.

The Shore Store Then

While some things change…

Others stay the same. The Shore Store was more than a cheap tank top destination, it was the workplace, marketing branch, and ultimately, an enormous tourist destination for all things Jersey Shore. The owner (and landlord of the oft-puked-in rental house), Danny Merk, became Reality TV star in his own right. He also made a buck or million off of these kids. They not only put his store on the map, but they also graced 99% of his t-shirts with their homegrown phrases. So until Mike stops screen-printing “Fresh to Death" wear for the sunburnt tweens of today, all he can say is thank you.

The star has shed so much weight since he started the diet.

Only toppings for Vinny.

Vinny has become the keto king.

It's no surprise he wrote a cookbook about the diet.

Vinny's keto diet is a big part of his narrative.

He was once the chunky carb-loving chap on the show but of late, the trim keto diet lover has become almost an extension of his healthy lifestyle.

In protest of Vinny's anti-carb attitude, Pauly D decided to organize a protest at his book signing.

You can watch the chaos here...

The cameras from the show were there, so we can expect this book signing protest will make it on to the next season. Speaking of carbs, continue scrolling to see the very relatable pics of Anne Hathaway looking sad after she finished her cupcake.