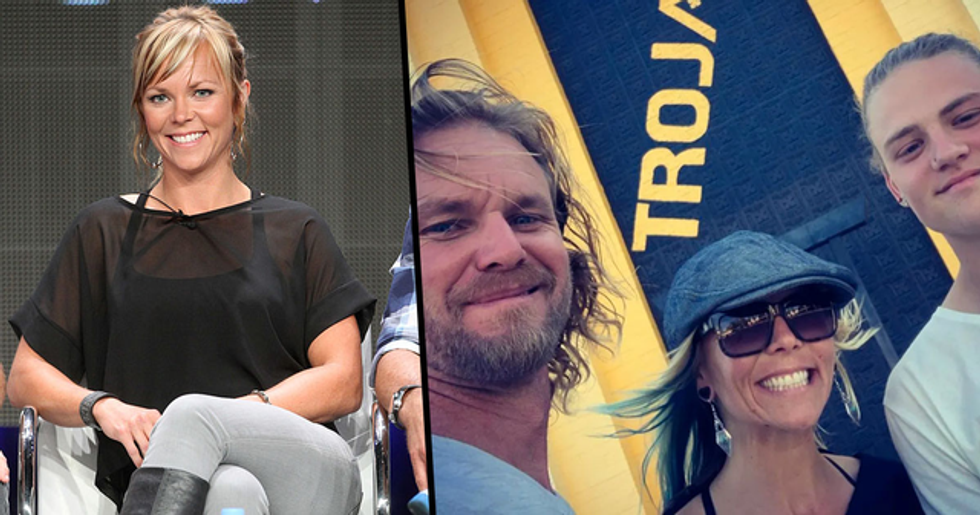 Known as "the fastest woman on four wheels," Combs was trying to hit 619 m.p.h. when she fatally crashed. She was only thirty-six years old. Last week, Twitter has been flooded with tributes for the professional racer and TV personality.

And now, her grieving boyfriend has claimed that Jessi has reached out to him from beyond the grave... in an Instagram photo.

Keep scrolling to learn more about the tragic events that cost the star her life, and to see the spooky photo in which her presence has been felt...

Jessi Combs was a professional racer and TV personality.

You probably know her from the seventh season of Mythbusters, of which she starred in twelve episodes, for featuring as a guest-fabricator on Overhaulin, and as co-host of Xtreme 4x4.

The star had a passion for car racing from a young age.

According to her website, she "found a love for speed and its machines at a very young age," and was passionate in her pursuit of a career in automotive fabrication.

But it can be dangerous work.

In an unexplainable accident in 2007, while working in the studio, the star was folded in half by a large piece of machinery that had fallen on her - fracturing her spine's L3.

The freak accident should have left her wheelchair bound...

But miraculously, after surgery and therapy, Combs eventually made a full recovery.

Recently, the star had been attempting to break her land-record.

She was set to embark on the challenge in a jet-powered car in the Alvord Desert, Oregon.

Combs had previously tried to break her record as early as last year, but mechanical faults prevented her from entering the record books once again. So the star was ready to make her fault-free attempt this week.

She documented the lead up to the event on her Instagram page.

Just three days ago in an Instagram post, Combs indicated that she was aiming for 619 mph in the jet-powered vehicle at the event on Tuesday.

But, at around 4:00 pm on Tuesday, the Harney County Sherriff's Office was called to the scene, which was located in the desert ninety miles south of Burns, Oregon.

Combs had been in a horrific crash while attempting to break her record. The vehicle that she was driving at the time of the accident was a supersonic vehicle crafted from the fuselage of a jet plane. She'd already driven the vehicle once before, back in the Fall of 2018 and even then, an issue with it caused the door to rip right off of it, while she was inside.

The star tragically lost her life.

According to NBC News, "Combs was the lead driver on the North American Eagle racing team. She was identified as the sole fatality connected with the accident, which is under investigation."

He concluded his emotional post with a message to fans.

"Love you all and thank you all for being such amazing friends to her, she dedicated her life to helping support others dreams and I promise I will continue that."

He followed it up with a simple "My heart goes out to her family."

“Jessi was known for her bright smile, positivity, and tenacious pursuit of the fulfillment of her dreams. Her drive was infectious, and she served as a role model for young Girls, and Women around the world. People that loved her and followed her became family, all bonded together by adventure and passion. "Her fans adored her, and she lived to inspire them. Jessi’s most notable dream was to become the fastest woman on Earth, a dream she had been chasing since 2012. Combs was one of the rare dreamers with the bravery to turn those possibilities into reality, and she left this earth driving faster than any other woman in history."

Autoblog also created this touching tribute to Combs after her passing.

Commenters mourned her passing in the comments section, saying things like "Passed away doing what she loved. Rest in peace."

This tragic event has fans grieving all over the world.

People have been flocking to social media to leave touching tributes for the late star.

People have been left devastated by the news.

Chris Maida, who said that he became friends with Combs after she left Extreme4x4, wrote that his heart was hurting following the tragic news.

Another paid tribute to the "role model" whose life was taken too soon.

"Unbelievable role model to people in general," they wrote. "What an incredible life. God bless you, your family, & friends. Gone way too soon."

The star's last words have also surfaced and they're utterly heartbreaking.

In her final ever tweet, penned just 2 days before she passed away, the star thanked fans for their ongoing support. "I just want to thank all of you for your support and loyalty. That’s all. Have a nice day :)."

Combs was romantically involved with a crew member of hers, Terry Madden, before she passed away.

Madden wrote a heartbreaking Instagram post dedicated to his partner: "So I don’t know how to say any of this but it all needs said. I have never loved or been loved by anyone as much as this amazing woman @thejessicombs she was truly my unicorn and I enjoyed every single minute that I had with her. She was the most amazing spirit that I have ever or will ever know. Unfortunately, we lost her yesterday in a horrific accident," he wrote.

Her boyfriend was one of the first at the scene.

But, tragically, the attempts to save her life came to no avail. "I was the first one there and trust me we did everything humanly possible to save her!! I’m not ok, but she is right here keeping my going - I made her a promise that if this didn’t go well that I would make sure and do good with it, please help me with that," explained Madden in his emotional Instagram post.

Madden continued by warning people about those who'll try to profit from her death.

"Please donate to nothing, I know there will be people try, we are finishing the documentary as she wished and the world will know the truth and her foundation will use those funds to do amazing things in this world and make her legacy live on properly," he explained. "In the coming days, her family and I will get the proper channels put together that you can then donate to that foundation but until you hear it from me wait please-I don’t want some asshole profiting off this (already had one try to sell us a video)..."

Madden is visibly struggling without Jessi by his side.

He has been regularly sharing photos from happier times, and he wrote: "Not sure how to cope. I miss my @thejessicombs so bad... It's a constant for me to be in our favorites file on my phone looking at our pictures."

And he is understandably in turmoil over her sudden death.

"We chose to live on the edge and enjoyed every minute of it." He captioned a photo of them together: "I just never thought it would be possible that one of us would fall... I’m struggling today. I know I couldn’t have stopped her if I had tried, and she did die doing what she loved but I’d give anything to have this all be a bad dream..."

But, now, he believes that Jessi has spoken to him from beyond the grave.

Terry shared a photo of him with friends after planning a celebration of Jessi's life. "We had just had a really rough day trying to hammer out the details for Jessi celebration. Walked out into the parking garage said our goodbye, cried, told a few stories, and did our best to look happy in a picture," he wrote.

There was a mysterious light above Terry's left shoulder...

And Terry believes that it was Jessi watching over him. "I’ve never been extremely faithful have always had questions, but the signs thru all this have been overwhelming. She just couldn’t be left out of this picture😘 love you @thejessicombs and love the fact you will always be looking over my shoulder."

He finished his post with an update on her foundation.

"We are well on the way with amazing friends to having her foundation established and I WILL make it my life mission to run this foundation in her name and fulfill as many of her dreams as humanly possible and then maybe a few more." R.I.P, Jessi.