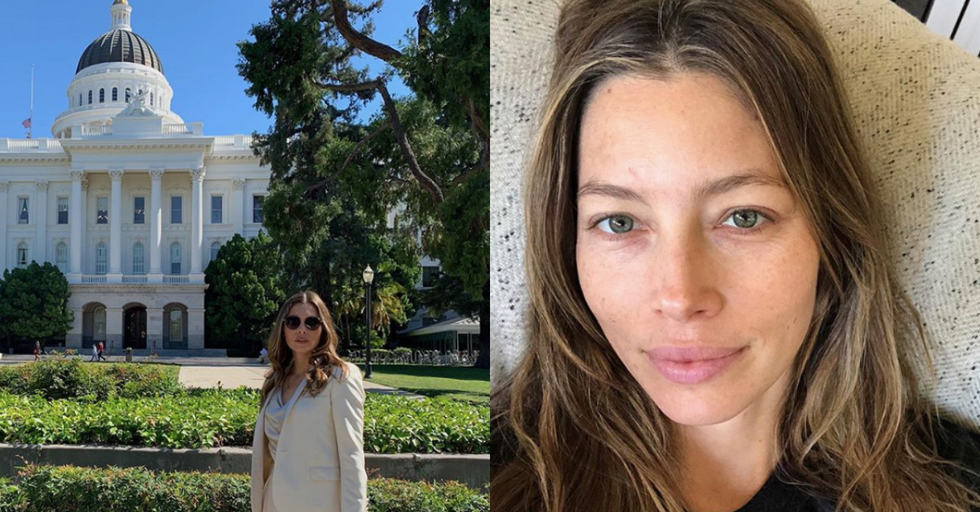 Okay, we need to talk about Jessica Biel. This week the internet exploded with accusations that Jessica Biel was the newest celebrity to speak out about her dislike of vaccinations. In reality, she went to Sacramento to lobby against a vaccine bill and says she did it for, well, other reasons. But in all honesty, it's still not a great look.

So let's take a second to see how we got into this whole mess in the first place.

And hey, maybe figure out exactly what in the heck Jessica Biel is actually trying to say.

Because honestly, it's still unclear what's going on here.

Is she anti-vaxx or was this all just some big misunderstanding?

Her problem came by partnering up with notorious anti-vaxxer Robert F. Kennedy Jr.

Kennedy Jr. claims to be an environmental activist, but recently his focus has been more and more anti-vaccination.

Kennedy Jr.'s claims come from the baseless anti-vaxx comments that surfaced earlier this year and have no root in science.

His argument was that since people are getting measles more frequently, it must be because of vaccinations.

Measles outbreaks are not being caused by vaccinations.

In fact, it's the opposite.

Measles outbreaks are being caused by parents not vaccinating their kids.

Can't get measles if you're already vaccinated.

So now, Biel has partnered up with this notorious anti-vaxxer.

The two teamed up to fight a vaccination bill currently working its way through the California government.

This photo on Instagram surfaced with Robert calling her "courageous".

Ah yes, having the courage to fight a bill that could potentially save lives.

Biel had a different story on her fight, but we'll get to that later.

She had to know that the optics of working with an anti-vaxxer to fight a vaccination bill would be bad.

But nevertheless, she continued to work closely with Kennedy.

So really, the mistakes lie with her... and the entire internet that got their takes out before getting a comment from her.

So what was the bill even about?

The duo had come to lobby against SB 276, a California state bill that would, "limit medical exemptions from vaccinations without approval from a state public health officer."

Basically, it will require children to get vaccinated unless getting express permission from a state public health officer.

I kind of thought this was already a law.

Don't you need to get vaccinated before enrolling in school or like getting on an airplane?

Heck, at this point it seems like pets have stricter laws for vaccinations.

Wouldn't want your new lil pup getting parvo. That disease is depressing.

Rumors grew larger because of Biel's anti-vaxx past.

It's not the most concrete past behavior, but it's still there nonetheless.

Biel and her husband Justin Timberlake had just had their first child.

Do we all have to start hating Justin Timberlake now?

Because I don't know if I can make my heart do that.

We've been Timberlake fans longer than we've been Biel fans.

So for some reason, this hurts way more.

Anyway... Back in 2015 the couple hinted they wouldn't be getting their son vaccinated.

A friend of the couple told InTouch, "Jessica is refusing to vaccinate him. She feels that vaccination could cause complications."

So again, not straight from the source.

But when there's smoke, usually there's a lack of medical treatment.

Biel has clapped back at her accusers.

"I also support families having the right to make educated medical decisions for their children alongside their physicians."

So by educated medical decisions, you mean...

Just getting vaccinated because every piece of legitimate science has pointed them to be all upside and no downside?

She goes on to say she has a personal stake in this bill.

"My dearest friends have a child with a medical condition that warrants an exemption from vaccinations, and should this bill pass, it would greatly affect their family’s ability to care for their child in this state."

Here's her statement in full.

It sounds reasonable in her statement, but I still think it's important to note that bills need to cast a wide net. We can't lobby against bills for personal reasons.

A bill requiring parents to vaccinate their kids will benefit the entire state.

Parents will still be able to request exemptions for legitimate medical concerns.

And her work with a notorious anti-vaxxer makes her motives sound questionable.

We can't be for sure if this statement is just her saving face, especially when considering past "rumors" about her and JT.

But we're curious to hear your thoughts.

We don't hold all the answers here at 22 Words.

Do you think parents should be required to vaccinate their kids?

Or should it be a choice they can make with their doctor.

Do you think Biel is a secret anti-vaxxer?

Or is she being genuine in her response?