Her long and detailed statement exposed some personal information... | 22 Words 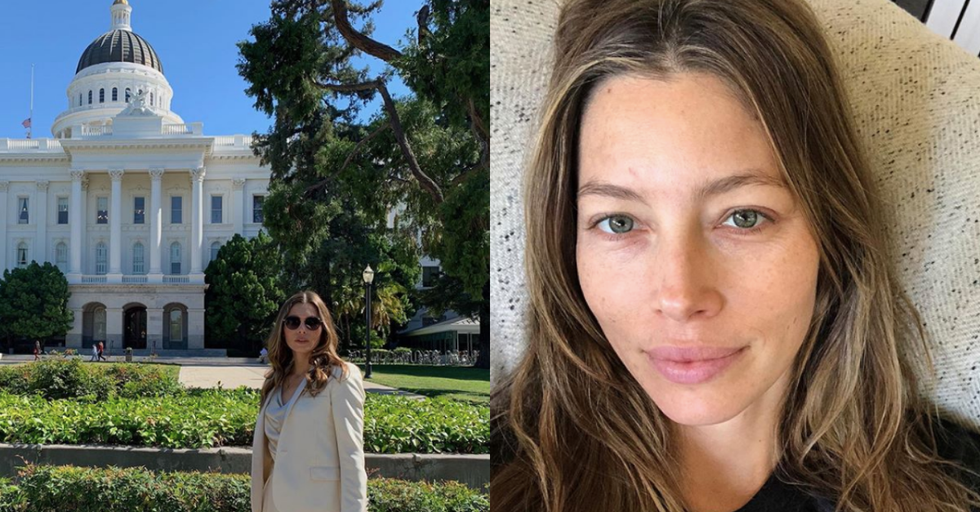 Jessica Biel Reveals What She Really Thinks About Vaccinating Children

This topic has been the center of debate for years now. Should we vaccinate our children or not? Is the vaccination bad for them in the long term? Should their bodies be forced to develop their own resistance against disease? All of these questions have been asked and answered multiple times, but the general public still can't seem to settle the debate.

Health experts are growing concerned as the number of parents choosing not to vaccinate their children has increased dramatically over the past 8 years. And rumors that Jessica Biel supports the "anti-vax" movement has reignited outrage amongst the "pro-vaxxers." But things became even more complicated when Biel released a personal statement. Here's a round-up of exactly what happened.

It all started when Jessica Biel was spotted with anti-vax campaigner, Robert F Kennedy.

That clearly didn't give off the right vibe as rumors about her being against vaccinations started spreading like wildfire. If you're going to engage in chit-chat with a well-known advocate against vaccinations, people are bound to assume the worst.

And Kennedy wasn't helping the situation either.

On his Instagram, he posted a whole array of photos with Jessica. Apparently, Biel went to Sacramento in order to discuss a proposed bill with legislators.

Kennedy also made comments on Biel's stance on the issue.

In an interview with The Daily Beast, he claimed that she was in favor of "safe vaccinations and medical freedom." He also added that she was "very strong and very knowledgeable."

Those aren't comments that people often use to describe him.

Users took to Instagram to share their dislike towards what seemed to be a new "partnership." They were upset that Jessica, who has a whopping 7.6 million followers, was sharing her controversial views on such a massive platform, wherein people who don't have an opinion on the matter are more likely to be swayed to agree with her. And you wouldn't believe what she said to address the issue!

This user (@handsomedaddybear) referred to both Biel and Kennedy as "a threat to public health." Simon Stevens, the Chief Executive of the National Health Service has warned parents who are against vaccinating their children as it may lead to serious implications. He referred to them as "grossly irresponsible" for spreading "scare stories" about vaccinations, which led to people questioning it.

This user (@jjtantillo) was also annoyed to say the least.

He called them both "idiots" rather than explaining his own, personal stance under the post as many other people did. A lot of people took this very seriously, leaving long paragraphs explaining that both Biel and Kennedy were spreading false information.

So why were people so outraged?

Even though deaths caused by measles has decreased, over 7 million people are still affected by the disease globally. And without vaccinations, the death rates would be significantly higher. This is why so many people are frustrated, because life-saving vaccinations aren't as easily accessible around the world as they are in the US. Yet, there are parents out there who risk their child's health because they believe that it would actually bring more harm to the child. I may be slightly biased on the issue, but that's because I've seen, first hand, the damage that diseases such as measles can do. And, let me tell you, it ain't pretty.

Here's just one of the many stories.

The Lee Family deeply regretted not vaccinating their three sons. Each of them was affected by the measles and had to be quarantined for eighteen days. Seeing their sons break out in painful rashes that wouldn't allow them to sleep or eat for days was heartbreaking for the parents and it was all because they chose against vaccinating the boys.

But there was also a lot of support for Jessica and her proposed "anti-vax" outlook.

Many thought that she was actually doing the world a favor by spreading this message. Anti-Vaxxers are extremely passionate about voicing their side of the argument, which is weird because the foundations of their argument are pretty weak.

So why are "Anti-Vaxxers" scared of the needle?

According to the World Health Organization (WHO), the group base their claims on a lot of false evidence. Here are some examples.

"The majority of people who get disease have been vaccinated."

"Diseases had already begun to disappear before vaccines were introduced, because of better hygiene and sanitation."

This is another common statement that you'll find splattered all over anti-vax arguments. However, the WHO also explains that this one is just as false as the first one. "It seems clear from these experiences that not only would diseases not be disappearing without vaccines, but if we were to stop vaccinating, they would come back."

And if you don't believe me, here's the evidence to back it up.

"Of more immediate interest is the major epidemics of diphtheria that occurred in the former Soviet Union in the 1990s, where low primary immunization rates for children and the lack of booster vaccinations for adults resulted in an increase from 839 cases in 1989 to nearly 50,000 cases and 1,700 deaths in 1994."

Because the rumors were getting out of hand, Biel decided to release a personal statement on her Instagram.

The Summer Catch star made her opinions clear, highlighting: "I am not against vaccinations."

Her long and detailed statement exposed some personal information...

She mentioned that her friends have a child that needs to be exempt from vaccinations due to the health risks involved. The state's current legislation regarding the issue meant that it would be extremely difficult to deny vaccinations, but Biel doesn't believe that that is the appropriate way in which these cases should be handled. She believes that parents should have more freedom to decide what is best for their child. I mean, if the vaccination poses a significant threat to the child's life, I think that there should be exceptions. Some people forget that this debate should always be about saving lives, as opposed to imposing personal opinions.

Just like Jessica, many other celebrities have voiced their stance on the issue.

Kristen Bell, an American actress and singer, said that she did "extensive research before making the decision." She told The Huffington Post that "the benefits of vaccinations, it has been proven; they work. That’s enough for me to climb up on a soap box, make some ugly cardboard sign in my garage, and let other mothers know that it’s safe, important, and bigger than emotion: It’s the truth."

Salma Hayek, an ambassador for UNICEF, made her opinion known, too.

The actress has worked on eliminating maternal and newborn tetanus, which can be a fatal disease. She says: "The thought of losing a child to a disease which can be easily prevented seems unbearable, especially when it is within our power to prevent it." I wholeheartedly agree. Why would you want to risk the lives of children? Sounds like a lose-lose situation to me.

However, some celebrity moms are openly against vaccines.

Jenny McCarthy blamed the MMR shot that her son, Evan, received as a child for his autism diagnosis. Read the full article about her honest opinion on vaccinating children here.

Should the choice ultimately lie with parents?

The laws surrounding this issue are taking more and more freedoms away from the parents of children who are against vaccinations. As of July 2018, all fifty states (including DC) are required to get vaccinations for diphtheria, tetanus, and pertussis, polio, measles, and rubella. Anti-Vaxxers are campaigning to make their states loosen these restrictions, but healthcare experts are working against them.

It will be a long battle, but if more people start siding with the Anti-Vaxxers, you never know, it could all change.

I personally agree with vaccinations. It really isn't worth risking millions of lives just because there's a small chance that the shot might not provide complete immunity. You're better off being safe than sorry.