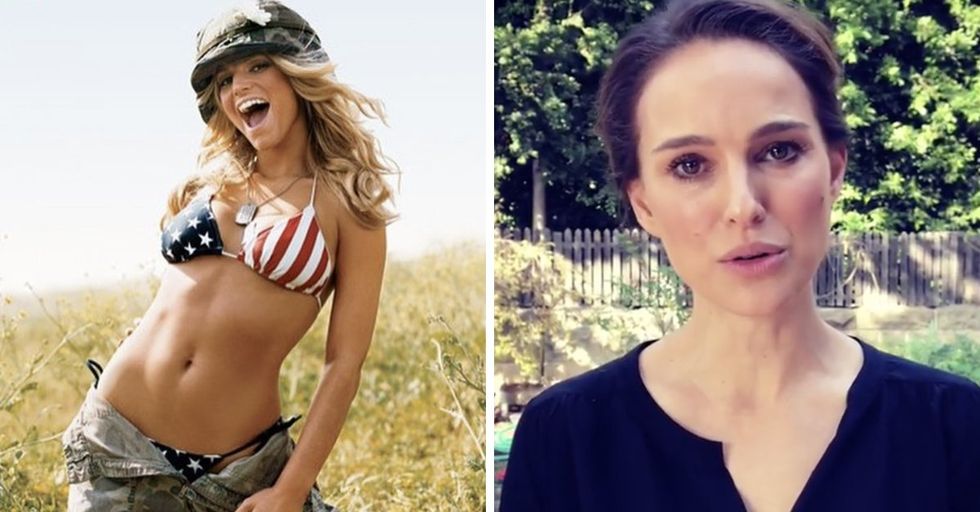 Let's tell it like it is: the '90s and '00s were a weird time– and there's no getting around it. For one, the fashion trends were very different. Do you remember butterfly clips? Or a time when it was cool to roll yourself in glitter before hanging out at the mall for a night of...mall hanging? How about pogs or cargo shorts and starter jackets? As I said, this time period was really weird.

If you listened to the radio or read a gossip catalog during the '90s and early '00s, you'd also know that it was filled with legendary pop stars. Whether you were an Xtina fan or Team Britney, there's no denying how pop queens ruled this time period. These pop stars were young girls, being marketed in a way that was out of their hands.

If you've been on Twitter or Instagram lately, then you'll know that this very topic came up between Jessica Simpson and Natalie Portman.

In a recent interview with USA Today, Portman spoke about her upcoming role as a pop star in Vox Lux.  The conversation naturally moved to actual pop stars, and Portman made some interesting comments about Simpson.

Portman brought up an old magazine cover that Simpson posed for back in 1999.

“I remember being a teenager, and there was Jessica Simpson on the cover of a magazine saying ‘I’m a virgin,’ while wearing a bikini, and I was confused," Portman said. “Like, I don’t know what this is trying to tell me as a woman, as a girl."

Out of context, this can be interpreted as a slam on Simpson.

In 1999, Simpson was only 19-years-old. It's hard to think that she had complete agency over what she wore on the cover of a magazine. Simpson decided to respond to Portman's comments and posted an open letter to her on Instagram.

Simpson took the time to carefully and respectfully call out Portman's comments.

"I have always embraced being a role model to all women to let them know that they can look however they want, wear whatever they want and have sex or not have sex with whomever they want," Simpson wrote.

And because these women are mature adults and not petty in the slightest, both the call out and the response was smart, well-worded and respectful.

Two queens having a conversation! "I only meant to say I was confused - as a girl coming of age in the public eye around the same time - by the media's mixed messages about how girls and women were supposed to behave," Portman wrote in her apology.

Now, that is how you handle these types of issues!

It's encouraging and refreshing to see a conflict handled in a positive and constructive way.

It's always fun to look back on amazing magazine covers from that time period. Let's have a look, shall we?

Britney's denim outfit is really, something.

Britney was the queen of amazing magazine covers.

Was there anyone hotter than Britney in the early '00s? Nope.

Who wants to go as this magazine cover for Halloween next year?

I will forever be a Spice Girls fan.

Nobody ruled the '90s quite like the Spice Girls. Name a more iconic girl band– I'll wait.

Were you more of a Backstreet Boys or *NSYNC person?

Personally, I was BSB for life.

Nobody was hotter than Leo in the '90s.

He oozed that irresistibly tortured, angsty, boy vibe. Also, his '90s hair is everything.

What an iconic duo.

Teen People really knew how to bring people together for the perfect cover. Who else had a subscription for this magazine that they treasured more than any other earthly possession?

The pink ensemble and matching cowboy hat really solidifies this '90s cover as being "of the time."

Has Rob Lowe aged at al?

Also, this pose of him lifting up his shirt is everything. He's an ageless robot that cannot be trusted.

Do you remember when it was cool to look exactly like your partner?

Haven't you always wanted to have the same exact haircut as your significant other?

Prince William was the bae of the early '90s.

If you didn't have a crush on Prince William when you were a kid in the '90s, who were you?

Did you know that Nick Nolte was, at one point, the sexiest man alive?

Are there any Whoopi and Ted shippers still out there? This cover's for you.

Who didn't obsess over Party of Five and wish they were part of the gang?

TLC was everything in the '90s. This cover is flawless.

What do Justin Timberlake, Beyoncé, Chad Michael Murray, and Ashley Olsen have in common? They were on the cover of J-14 together, once upon a time.

These three should've put out a single, to be quite honest. The purple color scheme really brings this cover together.

This is quite the early 2000s cover if I've ever seen one. Just a bunch of friends, hanging out. Totally natural!

Again, why didn't these two put out a single together? They're style superstars, after all!

Have you ever seen a more '00s cover?

I think not. Also, the photoshop work on this cover is truly astounding.

Teen People knew exactly what they were doing.

Take a moment and imagine a song with Pink, JC Chasez, and Sisqo. Fun fact: you can buy this magazine for over $2000 on Amazon. I know what I'm putting on my Christmas list this year.
Buy Now

Topher Grace and Scarlett Johansson on the cover of Teen Vogue together is everything I've ever wanted. Share this with your friend who loves '90s and '00s nostalgia!