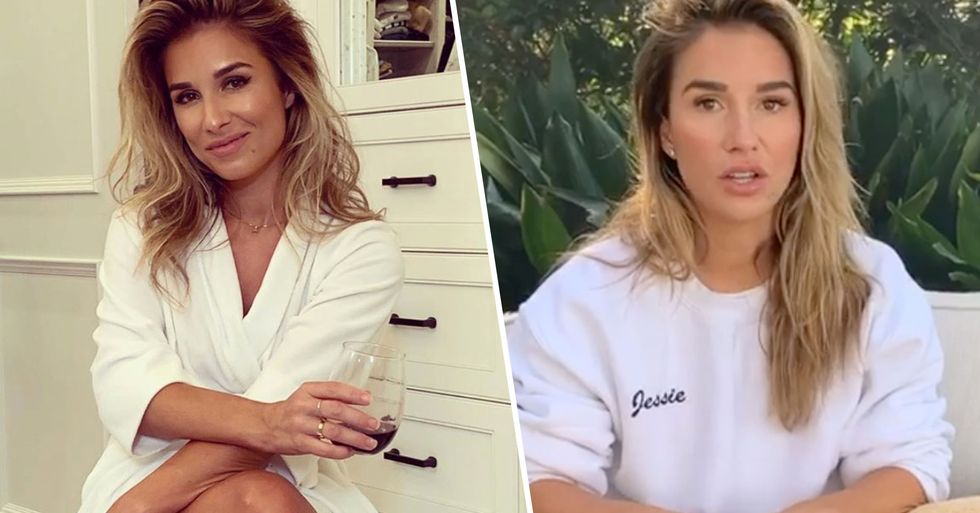 Recently giant leaps have been made by people spreading body positivity, but sadly not everyone is on board with this liberal movement.

Jealousy is an ugly trait, one which Jessie James Decker is all too used to, and her latest controversial Instagram post left fans appalled.

While the comments from fans are shocking, it's her replies that have got everyone talking...Scroll on for the problematic pic.

Then where have you been?

First and foremost Jessie James Decker is known for her country-inspired music.

Before her big break, Jessie had her fair share of setbacks. At just fifteen years old, she auditioned for most of the country labels in Nashville, Tennessee, only to be rejected by every one of them.

But she didn't give up!

Decker began working with Carla Wallace of Big Yellow Dog Music. After which, one of her songs attracted the attention of Mercury Records, which offered her a recording contract.

She released her debut album, Jessie James, in 2009.

But it wasn't just music that thrust Decker into the spotlight...

She also tried her hand at reality TV... which isn't short of hilarious moments.

A few years later in 2013, she starred with her husband Eric Decker in the hit reality show Eric & Jessie: Game On.

And it's clearly given her the confidence boost she needed.

After swinging a curveball and telling her bullies in high school what to do!

But it wasn't just in just high school where Decker had to endure hurtful comments, she gets them now more than ever, due to her rising fame.

The singer, reality TV star, and designer has a large following on social media, but it's her family that is her main focus.

Her husband, Eric Decker, and their young children, Vivianne, Eric, and Forrest, are the ones who clearly take center stage in her life.

Especially her posts about life as a mom.

Her family is nothing short of adorable...

And this is probably one of the reasons for her flock of online fans.

She's certainly not afraid to be "real" online...

And often shows images of a busy family life.

But Jessie is known for being down to earth...

And an all-round uplifting celeb to follow on social media. Fans usually can't get enough.

With more than 3.2 million followers on Instagram, Decker is constantly being watched on social media.

And not everyone agrees with how she lives her life...

In fact, they feel so strongly about what she posts, they feel the need to chuck up unnecessary abuse at the star.

Maybe people need to mind their own damn business?

And what's worse is she's getting body shamed by other women!

Can we please cancel this toxicity.

Decker receives plenty of negative comments, sometimes on posts that she hadn’t expected to be controversial.

And while she does her best to drown out most of them, some just can't be ignored.

Remember the one that showed her breastfeeding while holding a glass of wine?

Decker admitted that she's surprised when a picture causes offense. “You can’t take it seriously, and you can’t get sensitive to it. It’s just, you know, it happens." She said.

But when it all gets a bit too much, she has her own way of dealing with it... “Social media is for fun," she said. “But if it gets to the point where it’s affecting you then get off of it. Don’t look at it."

Recently Decker has had enough of the negativity, resulting in her clapping back at haters. She took to Instagram to fire back at users leaving messages about her most recent photo.

The post, captioned "Tuesday," has since received backlash after fans noticed her son in the background.

In response to the comment asking if she walks "around like that" in front of her kids, she replied: "Yes. No different than a swimsuit. I teach my children the body is beautiful [heart emoji] nothing to be ashamed of."

We're all here for her body positivity.

Another comment on Jessie's post reads: "Are you really that desperate for attention?" To which Jessie sarcastically replied: "Yeah, I don't get enough love. Can I get a hug?"

We can't get enough of the star's humorous approach to fans vile comments.

Another critic commented on Jessie's post, "Oh hey everyone please look at my body and tell me how hot I am." To which she replied, "Let's remain calm Susan."

But not all comments were bad...

Jessie also took the time to reply to some comments from fans, one of which told her, "Girl you're thriving if this is your Tuesday [laughing emoji]." The music artist then replied with laughs, "Or losing my mind." Check out the pic below...

Here's the photo causing so much controversy...

But despite the negative comments, it's nice to see some uplifting responses from fans. Keep scrolling to see how Kylie Jenner is dealing with trolls that won't stop calling her ugly...