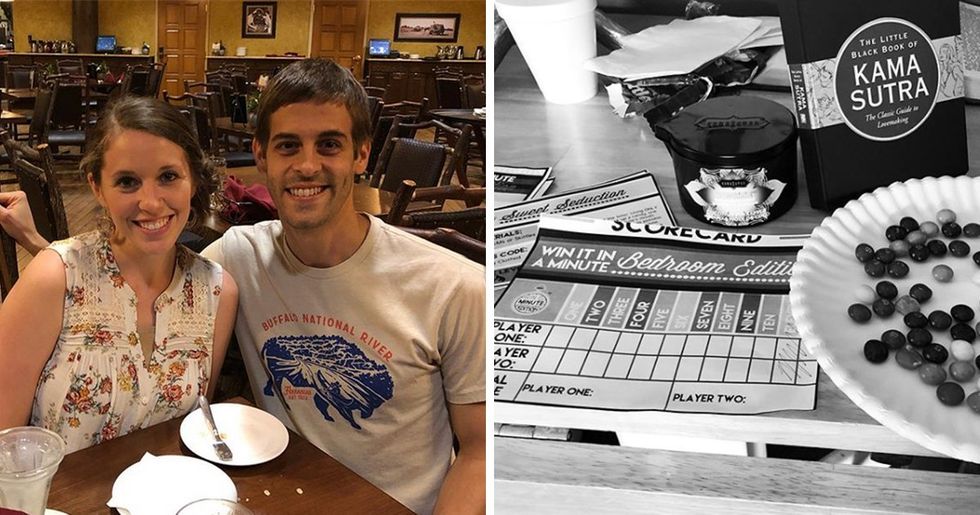 The Duggars are at it again. While once upon a time they were America's favorite squeaky clean family, their reputation has picked up a bit of dirt over the years. And now Jill Duggar has made us roll our eyes and wonder "why did we like these people?" once again.

And it probably doesn't surprise you that the subject at hand is a big taboo in the Duggar household: sex. Specifically, which kinds of sex are good, and which kinds are bad. What will surprise you is that Jill Duggar has apparently read the Kama Sutra. But wait, isn't that Hindu? Isn't it ungodly?

Well, don't worry because Jill's got lots of advice on how to keep all of your sex perfectly Biblical. Hold on to your hats because we're about to delve deep into Duggar territory, and this time it's getting sexy. But not too sexy, just Christian sexy.

Jill Dillard (formerly Duggar) is the 4th child of the Duggar clan.

They originally rose to fame in the TLC show 19 Kids and Counting.

But while the family portrayed a wholesome image...

There have been quite a few scandals over the years.

Starting with allegations that Josh Duggar, the eldest son, molested girls including his sisters.

19 Kids and Counting is no longer on the air.

But the eldest Duggar siblings continue the Duggar empire with their own show, Counting On.

Jill featured heavily in the early seasons of Counting On.

But after 2016 she's faded somewhat from the spotlight.

Which could have something to do with the actions of her husband Derick.

TLC fired him from the show after a series of homophobic and transphobic Tweets.

Since then, the Dillards have been out of the TLC spotlight.

But they've been keeping busy on social media.

And that's where they've ruffled some feathers again.

They just can't seem to keep their mouths closed.

It started off simply enough.

A cute anniversary post sharing a trip celebrating 5 years together.

But if you swipe a couple photos in...

Hidden in those cute pictures of good clean fun is something a little different.

Fans were quick to notice.

And many of them were utterly scandalized!

Did you know that the Kama Sutra is rooted in Hinduism?

And that doing Hindu sex things is asking Satan into your marriage?

Some fans were even scandalized to know that Jill and Derick have a sex life.

Apparently they think those kids appeared through divine intervention.

But Jill was quick to make things clear.

She does NOT recommend the Kama Sutra: this is a Jesus version of that Hindu text.

And they absolutely, definitely are NOT promoting pre-marital or homosexual sex.

It's unclear what either of those things have to do with using the Kama Sutra in your marriage, but apparently some people think that anything other than missionary is a clear path to The Gays.

Apparently Satan is a tricky guy.

Because even looking at the Kama Sutra is a way to move towards an unbiblical marriage.

Is it surprising that Jill felt like she had to make it clear just how not gay and not kinky she and her husband are?

Is it still kind of a bummer that she can make a simply anniversary post into an anti-gay post?

More than we can say.

This is coming from the family that renamed deviled eggs.

Who knew that eggs were a path to sin?

The Duggars kept their conservative views fairly mellow in the early days of 19 Kids and Counting.

Sure, we all knew that they weren't allowed to be around the opposite gender, and that there was almost no screen time.

But (unsurprisingly) they left the homophobia and outdated expectations of women off the air.

Now that they've got a huge and rabid fanbase, those antiquated views have started to come out.

Like that time Michelle Duggar shared the advice that wives should always be available for sex.

No matter how bad you feel, even if you're incredibly pregnant, do it and be happy about it.

But some of their beliefs are "loosely based" on arbitrary Old Testament rules.

But Michelle isn't the only one doling out sex advice.

Jill also posted a blog with her suggestions for keeping things lively in a marriage.

And let's just say Jill has gone even further than Mom.

But you also have to make sure he wants it all the time.

By looking good constantly. This is some truly 50s housewife advice: "It’s easy to get home and throw on the frumpy pjs and wash your makeup off, but make sure that a few times a week you enjoy time together looking like you would hanging out when you were dating!"

She even tells you exactly how long you need to kiss your man for.

"Give at least a 6 second kiss when coming and going." This is the secret to a happy marriage.

But perhaps the wildest suggestion she has is don't talk to your friends when your husband has just arrived home.

Don’t answer the phone during your first little bit together in the evening, and tell people to call you later if your hubby just got there. It’s good for others and your hubby to hear you say something like, “I’m sorry, I’ll have to let you go now, my hubby just got home!"

Honestly if your husband is that insecure, you have other problems.

But don't worry everyone!

Her marriage is super healthy: she doesn't read the Kama Sutra.