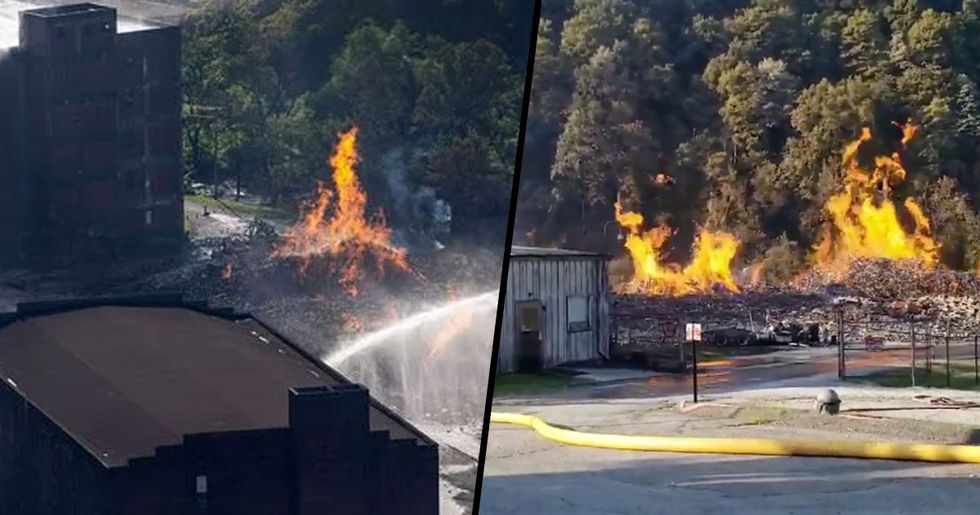 Love it or hate it, Jim Beam is one of America's number one bourbon.

Here in America, we just love our whiskey and there's nothing that's ordered more at the bar than bourbon on the rocks, am I right?

So one can only imagine the anguish of watching 45,000 barrels of the good stuff going up in flames. Sadly for Jim Beam, this has become a horrifying reality.

Read on to find out what caused this unimaginable disaster in the Kentucky warehouse.

Whiskey is one of America's most loved alcoholic beverages.

This beverage has its different varieties, such as scotch whiskey that is made in Scotland, Irish whiskey, and bourbon whiskey that comes from the US. And each and every single variety of whiskey is just so damn good.

America is proud of its range of bourbons.

Bourbon whiskey is basically a barrel-aged distilled spirit. The most popular brands of bourbon are Jack Daniels, Woodford Reserve, and Jim Beam.

Jim Beam has been around for hundreds of years.

This famous bourbon was created in 1795, with the original name of "Old Jake Beam Sour Mash" until it was renamed in 1933 in honor of James Beam, who helped to rebuild the business. It was created by Beam Suntory in Kentucky, and seven generations of the family have been involved in the whiskey production of the company ever since.

The popular bourbon has two warehouses open to the public.

There is the Urban Stillhouse in Louiseville, Kentucky, that holds a small working distillery and a huge tour for guests. The tour includes learning about the distillation of the whiskey, hands-on experiences making Jim Beam cocktails, and even making your own bottle of Jim Beam whiskey. The American Stillhouse is found in Clermont, Kentucky, and the majority of the distilling happens here. It's open to visitors and has a smokehouse restaurant on-site for guests.

There is a warehouse purely intended for production.

This warehouse is located in Versailles, Kentucky, of the Woodford County, and a lot of the production and shipping of the product is done from here.

This very warehouse caught fire on Tuesday this week.

The fire began at around 11.30pm, and, so far, it has been speculated that the lightning storm that was going on that evening was the cause of the fire.

The fire was spreading... fast.

Police Lt. Michael Fortney said that a security guard reported the fire to the local authorities, and fire engines soon turned up on the scene. A total of forty firefighters from 5 different counties turned up to help to battle the quickly growing blaze.

The fire continued to burn throughout the night.

Firefighters were working around the clock in an attempt to get the blaze under control - and it probably doesn't help that whiskey has extremely high flammability.

Whiskey is known for its flammability.

Back in the 1700s, if whiskey caught fire, it was proof that the product hadn't been watered down. Alcohol vapor is the thing that catches fire, so the more alcohol vapor, the more fire... it doesn't take a genius to work that out.

So imagine an entire warehouse of whiskey catching fire.

It certainly isn't surprising that the fire got so big so quickly.

The fire burnt through till Wednesday.

Firefighters were using everything that they had to calm the blaze, including water, flame retardant foam, and even sand to limit its spread. The warehouse that contained thousands of barrels of the good stuff had slowly begun to collapse. By Wednesday evening, it had completely vanished.

An estimated 45,000 barrels were lost in the blaze.

A statement released by Jim Beam's sister company, Beam Suntory, claimed the warehouse contained "45,000 barrels of relatively young whiskey." Spokeswoman for the company, Emily York, told CNN: "Given the age of the lost whiskey, this fire will not impact the availability of Jim Beam for consumers."

Thankfully, nobody was injured in the inferno.

She went on to say in her statement: "We are thankful that no one was injured in this incident, and we are grateful to the courageous firefighters from multiple jurisdictions who brought the fire under control and prevented it from spreading."

The warehouse had the same area space as a football field.

Woodford County Emergency Management chief Drew Chandler told CNN that "the warehouses are massive", and have "the same area as a football field and are six or seven stories high."

An attempt to prevent pollution.

Chandler went on to explain that the fire was purposefully being allowed to burn for a few more hours in order for the less distilled spirits to be burned amongst the debris. It was intended to prevent the produce polluting nearby sources of drinking water.

The damage has already been done, however.

The nearby Kentucky river has been massively affected by the blaze, with gallons of the product making its way into a creek that has drifted into the river which has divided the river in half - one being water, the other being whiskey. John Mura, a spokesman for the Kentucky Energy and Environment Cabinet, said: "We do know there has been runoff enter the creek, and it has made its way into the Kentucky River."

Locals have been warned about the river.

An official warning has been issued from the Kentucky Energy and Environment Cabinet, warning recreational users of the river that "the runoff from the bourbon fire will create conditions that include water discoloration, foaming, and an odor. The runoff is anticipated to create low dissolved oxygen levels, which could have a serious impact on aquatic life in the river, including substantial fish kills."

This isn't the first time that a whiskey warehouse has caught fire...

In 2018, the Barton 1792 distillery in Kentucky caught fire and lost around 18,000 barrels of their bourbon. Around 1,000 fish were killed in the runoff from this disaster.

Jim Beam has been affected by lightning strikes in the past...

In 2015, another Jim Beam Kentucky warehouse caught an almost identical fire caused by lightning. Around 800,000 gallons of alcohol were destroyed in the blaze but, luckily, again, nobody was injured. In similarity to this week's incident, the nearby creek was contaminated, which lead to the deaths of thousands of fish. Jim Beam paid $27,000 to clean the mess up, and it's looking likely that they'll be having to do the same again very soon.

But there's no need to worry, all you whiskey lovers out there.

Jim Beam isn't going to be running out any time soon, despite the massive loss that they've suffered this week. There are 126 Jim Beam warehouses in Kentucky that hold a total of 3.3 million barrels of whiskey, so there's still plenty to go around!