Jim Carrey Arrives At Golden Globes With New Girlfriend, Gets 'Kicked Out' Of His Seat | 22 Words 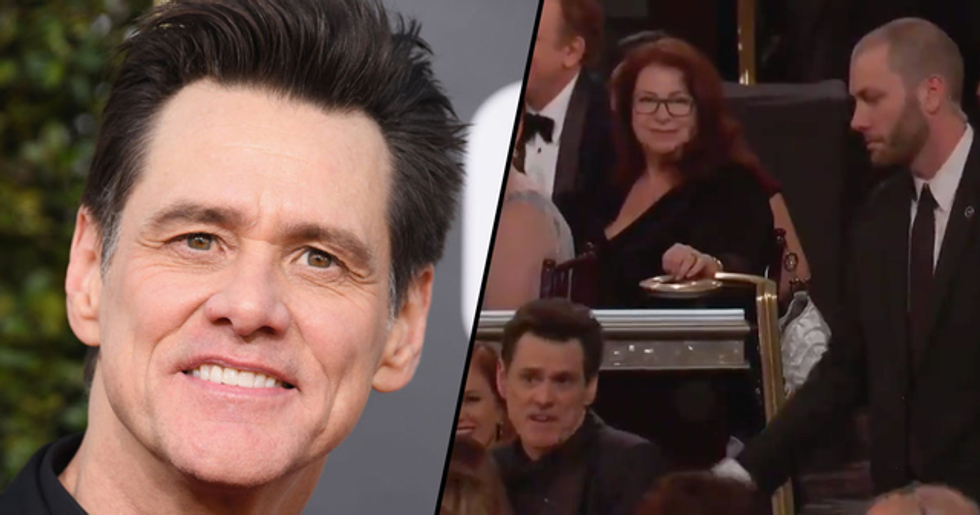 Jim Carrey Arrives At Golden Globes With New Girlfriend, Gets 'Kicked Out' Of His Seat

Everyone's favourite Canadian funny man, Jim Carrey, has confirmed he has found love again. He met his new girlfriend, actress Ginger Gonzaga, while filming his new Showtime television show, called Kidding. The two play a couple on the show, and clearly the chemistry was real and sparks flew.

They debuted their new relationship at last night's Golden Globes awards ceremony - and looked super cute together on the red carpet. Carrey was nominated for Best Actor in a Television Series - Musical or Comedy, plus Kidding was nominated for Best Television Series. But Carrey had somewhat of a surprise during the ceremony, as hosts Sandra Oh and Andy Samberg played a prank in their Golden Globes opening skit.

Jim Carrey is one of Hollywood's favourite actors.

Born in Newmarket, Canada in 1962, he became famous for his energetic slapstick comedy chops and supremely stretchy face.

He's one of the most recognisable faces to this day.

Some of his most famous movies include The Grinch, The Mask, Dumb & Dumber, and Ace Ventura: Pet Detective.

This is his new girlfriend, actress Ginger Gonzaga.

The two met while working together on a television show, and quickly fell in love.

They went public with their relationship at the Golden Globes.

This was one of their first public appearances together, and a rep for Carrey has since confirmed the two are dating.

Not only is it adorable that the pair have found love, but we can't help but notice how totally smoking the pair look together.

The TV show which brought the two together is Showtime's Kidding.

My new favourite show .thankyou @JimCarrey for Kidding. So funny yet incredibly sad. Deserves to win all the things… https://t.co/VeYBEbPXYj
— LisaG (@LisaG)1546820376.0

In it, Carrey stars as a beloved children's television presenter who's struggling with personal tragedy and family issues. Gonzaga plays his on-screen girlfriend.

The TV show has been very positively received.

It's garnered quite a loyal fanbase, with many commenting on Carrey's strong performance. Critics favour it too, as proven by its Golden Globe nominations.

While it's not Carrey's first foray into TV, he's better known as a movie star.

According to his filmography, Carrey has starred in over forty-five feature films, and just twelve television shows.

One of his most famous roles is Stanley Ipkiss in The Mask.

In the 1994 classic, Carrey plays a meek and shy bank clerk whose life is turned upside down when he discovers a magical mask. When he puts the mask on, Carrey's character is transformed into a supremely confident and charming character.

Aside from comedy, Carrey has played some more serious roles.

His turn as Truman Burbank in 1998's The Truman Show boosted his reputation as a serious actor. He plays a man adopted by a television network, whose entire existence has been turned into a sort of soap opera.

Another one of Carrey's more intense roles is in 2004's Eternal Sunshine of the Spotless Mind.

Kidding, which began in 2018, is Carrey's latest starring role.

The show has been confirmed for its second season later this year.

In their opening speech, they pointed out that television actor Carey was actually sitting in the space reserved only for film actors.

Carrey is then approached by security who move him out of his seat.

He even takes his Golden Globe dinner with him - saying he wouldn't want to disturb the film actors with his "DNA."

At first, we were a little confused.

Surely the Golden Globes could have made an exception for a star quite so prolific as Carrey?!

But - of course - Oh and Samberg were joking.

The clip was just a part of a skit, typical of award ceremonies, where the hosts get a free pass to mock Hollywood's elite.

Once you realise Carrey is in on the joke, the whole thing is pretty funny.

It's great to see such a famous actor be able to engage in some self-deprecating humour.

In fact, some think Carrey actually stole the show.

Even just his small reactions can prompt huge laughs - he basically attracts the majority of attention in any scene he's in. That's the mark of a truly great actor.

Although others took the sketch literally.

Some were outraged at the idea that such a living legend would be forced to change seat for administrative reasons.

You just have to look at Carrey's performance to know he's hamming it up for the camera - and totally in on the joke.

Carrey was on fine form for the entire ceremony.

It's one of his first public appearances since his return to the scene, and it's clear he hasn't changed a bit.

Even in a crowded room, Carrey is always the star.

His clowning around with the table glasses has almost immediately reached meme status.

On the red carpet, his Kidding co-star was interviewed.

It's clear Carrey has been missed by Hollywood.

Based on his hilarious appearances at the Golden Globes, Ross Matthews has called for him to host the upcoming Oscars. We'd totally love to see that!

For some, Carrey was the highlight of the whole evening.

UK newspaper the Sun claimed he'd "stolen the show" with his funny performance, which left the audience both at the ceremony and watching on TV at home in "hysterics."

Jim Carrey's title as one of Hollywood's funniest men is intact.

Despite taking something of a break from acting, it's clearly not as a result of a lack of talent or desire to get people grinning.

It looks like his personal life is thriving too.

Carrey and Gonzaga were looking loved-up on the red carpet, and stayed close by each other for the entirety of the evening.

Be still our beating hearts!

Call us old romantics, but there's nothing better than seeing a new couple in love.

Carrey seemed to have a great time at the event.

Dumb and Dumber and Green Book director Peter Farrelly (probably the nicest man in the world) being honored at the… https://t.co/84MOxZrS6Z
— Jim Carrey (@Jim Carrey)1546725302.0

He posted a weird and wonderful selfie with old pal, director of Dumb & Dumber, Peter Farrelly.

Both professionally and personally, things seem to be going great for Jim Carrey.

His beautiful new girlfriend, Golden Globe nominations plus loyal and loving fan base prove it's a great time to be Jim Carrey right now. And if he's happy, well, we're happy for him too!