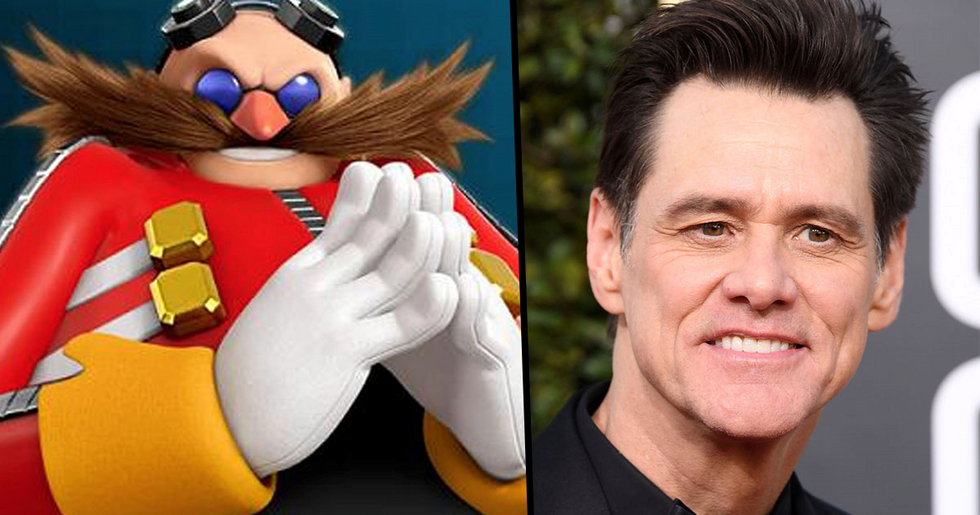 Fans of the classic Sega Mega Drive game, Sonic the Hedgehog, will, today, finally be able to watch the highly anticipated trailer of the live-action movie that will hit our screens later this year! Check it out at the bottom of the article!

Starring Ben Schwartz as the voice of Sonic and Jim Carrey as the evil Dr. Robotnic, fans have been concerned about whether Carrey is up to the job.

But it seems that they need not have worried. An image leaked by SegaBits that shows Carrey as Sonic's infamous arch enemy looks pretty spot on to us!

We think it's his trademark crazy eyes that really sell it.

And just wait until you hear how exactly he plans to portray this super villain. Believe us, you will not be disappointed...

Did you know that Jim Carrey has appeared in over forty-five feature films?

In the '90s, he seemed to be in every comedy film going.

So, unsurprisingly, he is one of the top fifty highest paid actors of all time.

He's earned around $2.5 billion in total and, on average, $94.3 million per movie. How could you not love that face?

His breakthrough role was starring in Ace Ventura: Pet Detective.

His wacky and somewhat outrageous behavior drew in audiences across the globe and the film grossed over $72 million at the box office. All righty then!

Continuing the comedy theme, he went on to further success with The Mask.

He starred alongside Cameron Diaz as a boring bank clerk who transforms into a wacky and wild superhero when he puts on a magical mask. Ooh, somebody stop me!

And it seemed that Carrey was unstoppable.

He starred next in Dumb and Dumber, alongside Jeff Daniels. This ridiculously childish film, in which toilet humor featured heavily, was loved by audiences, even though many critics disliked it immensely; it grossed an epic $120 million. The sequel made even more dough: a whopping $127 million.

It was clear that Carrey was going to be a presence on our screens for the foreseeable future, whether we liked it or not.

And let's be honest, he is a bit of a Marmite character. As in you either love him, or you can't stand him. And it's a thumbs up from us.

He then went on to star in several more successful movies.

Including Batman Forever, in which he played The Riddler. And The Cable Guy, a black comedy that was directed by Ben Stiller; it received mixed reviews from film fans and critics alike. For us, Carrey was just a bit too creepy in this one. But if you think he looked weird in this film, just wait until you see him as Dr. Robotnik! It's another level freaky...

He then decided that he wanted to try something with a little bit more depth.

And he found this with the comedy-drama, The Truman Show, in which he played Truman Banks, a man whose real life was, in fact, a hugely successful reality TV show. The movie was widely praised and Carrey won his first Golden Globe Award for Best Actor in a Motion Picture Drama. And we definitely think he deserved it.

But he soon returned to his slapstick roots.

Starring in Me, Myself & Irene in 2000. Not one of our favorites of his, if we are completely honest. But no-one can be perfect all the time.

Carrey appeared in How the Grinch Stole Christmas as The Grinch himself and, boy, was it a success. It grossed $335.1 million worldwide, making it the highest grossing film of 2000. But it's those scary Carrey eyes again! Just perfect for playing an evil robotic villain...

After The Grinch, he starred in his most financially successful film to date. Can you guess which one it was?

Bruce Almighty. WTF! We were surprised too! We enjoyed this film wherein Carrey plays a man given omnipotent abilities whilst God takes a vacation, but it's definitely not our favorite Carrey creation. We'd do so much more if we were God for even just one day!

Eternal Sunshine of the Spotless Mind was next.

Starring alongside Kate Winslet, we loved this odd science fiction comedy-drama. And we were pleased when Carrey received his fourth Golden Globe nomination for this role, as well as his first BAFTA Award nomination.

And no-one can say that he didn't work hard.

Carrey starred in a series of films in the 2000s including Yes Man, I Love You Phillip Morris, Lemony Snicket's A Series of Unfortunate Events and Fun With Dick and Jane.

Then he decided to reprise his role as Lloyd Christmas.

In the third (and hopefully final) Dumb and Dumber movie, Dumb and Dumber To. Unfortunately, this movie failed to resonate with the younger generation, many of who had not seen the original films. Definitely an example of a movie that is no longer relevant to today's society. Some things are better left in the past.

And now he is going to star in the upcoming Sonic The Hedgehog live-action film.

As the evil Dr. Robotnik no less! We are finding it really hard to picture him as Sonic's bald nemesis, but they must have picked him for a reason!

The movie itself is set to hit our screens on November 8th this year.

And it's being directed by Jeff Fowler in his feature directional debut with an estimated budget of $90 million. And we bet a big chunk of that was spent on CGI!

Ben Schwartz will be voicing Sonic the Hedgehog.

Ben is most famous for playing Jean-Ralphino Saperstein on Parks and Recreation and, more recently, for joining House of Lies as Clyde Oberholt. And here he is talking about his role in the new movie!

Paul Rudd was also set to play a lead role.

As Tom, a cop who befriends Sonic. But this fell through and James Marsden was cast instead. Slightly disappointing, but we are massive Paul Rudd fans! Aren't we all?

Sonic will appear as a CGI character within a real-world setting.

And we were beyond excited when the advertising agency, Hamagami/Carrol Inc, leaked some images of what the new and improved Sonic will look like. But, sadly, fans were less than impressed with the new Sonic.

Many preferred the original graphics.

And they claimed that the new version was just too different. Why try and fix something that ain't broke?

Some even decided to tweak the designs themselves.

With surprisingly good results! Especially this one from freelance illustrator, LadyGT, who reworked Sonic's proportions to better imitate the original game.

But it's not Sonic that's got everyone talking at the moment.

Oh no, it's the fact that his arch enemy, Dr. Robotnik, will be played by Jim Carrey. Can Carrey really pull off all that this live-action that is promised to be? He is getting on a bit... sorry Jim.

Check out the first leaked picture for yourself.

Here's Carrey all suited and booted as the evil Dr. Robotnik, complete with his trademark goggles and mustache! Surprisingly, we are actually loving this first look!

Fans thought that the picture wasn't real at first.

Can confirm that's real. We saw two trailers at CinemaCon, one which was entirely focused on Carrey as Robotnik. He… https://t.co/5VXW3HjsDi
— Scott Wampler™ (@Scott Wampler™)1556561720.0

But, film blogger, Scott Wampler, said: "It's real. We saw two trailers at CinemaCon, one which was entirely focused on Carrey as Robotnik." See the recently released trailer below!

He then went on to say that Carrey will be playing Dr. Robotnik in a very particular way.

He said: "He's playing the character in what I would describe as 'late '90s Jim Carrey mode." Ooh! Now that's exciting! We can just imagine Carrey playing a slightly manic and definitely evil Dr. Robotnik. It's all in the eyes. And Carrey can definitely do crazy eyes!

But what's with all the hair?

We know that diehard fans of the original Sonic the Hedgehog game are going to be literally losing their minds over this detail. Dr. Robotnik is supposed to be bald as a coot! Apart from his mustache, of course. And here Carrey is with a full head of hair. WTAF!

Now that's more like it! That's exactly like the Dr. Robotnik we hated as a child! Maybe a tad on the skinny side, but definitely better!

Fans are pleased about one detail that seems to be true to the game.

And that is that he appears to be sitting in a hovering spacecraft very similar to the one in the actual game.

Is it just us, or does he look a bit like Walter White from Breaking Bad in this picture?

There's no need to wait to see this Robotnik in action.

Because the trailer's been released just today!

It's definitely a live-action film, that's for sure. And Carrey's mustache is unreal! We can't wait to see the full movie now.