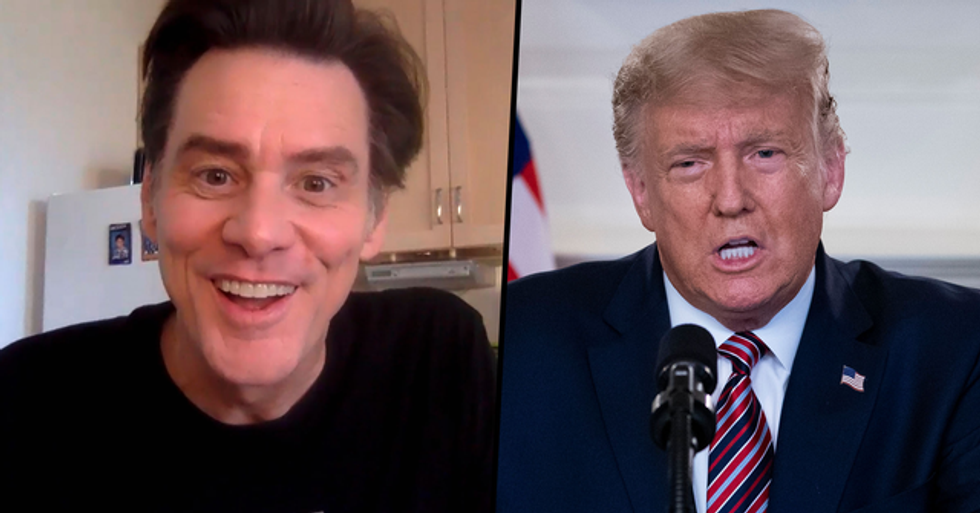 Jim Carrey weighed in on the current state of our country in a scathing essay this week, and he certainly didn't hold back...

The actor, who is a loud and proud Democrat, threw serious shade at the president in a lengthy essay written for The Atlantic.

As the 2020 elections loom, most of the country have been gearing up to vote...

And Carrey had some stern instructions for those fancying another 2 years under the ruling of Trump administration.

In the essay, which is titled "Truth, Justice, and a World Without Trump"...

The actor emplored for voters to work together to "get Trump out of office", and outlined the grim consequences if he were to serve as president for another 2 years.

Now, Carrey has always been vocal with his distaste surrounding our country's current leadership.

On several different occasions, he has publicly slammed and criticized the Trump administration.

And he hasn't been shy about naming and shaming the president, either.

In 2018, the actor labeled Trump as a "melanoma," before adding that his administration is "raping our system."

He has produced a stream of somewhat disturbing artwork on the matter, too.

Since 2016, Carrey has created over a hundred cartoons that protest and mock the Trump Administration, a pastime that some think borders on the obsessive.

His art is expressive, to say the least.

Has your Presidency jumped the shark? Better call SPACE FORCE! To stupidity and beyond!!! https://t.co/NrLGWEFBsI https://t.co/BZqxmJKjv9
— Jim Carrey (@Jim Carrey)1533941872.0

And not forgetting his disconcerting coronavirus-themed piece...

Carrey had sketched a grotesquely overweight American struggling to breathe as a result of the virus, all while sporting a red cap that bore the ironic slogan: "Make America Die For Him."

However, he insists that these bizarre drawings are merely something to make people smile...

All while communicating his thoughts on the country's politics, of course. “It makes me feel better if I can alchemize all of this," he told The New Yorker on his art. “Turn it into something creative and make people on the Twitter feel good."

So, when he penned his latest anti-Trump essay...

Most of us weren't too surprised.

In his latest excerpt, the actor, who usually specializes in comedy and all things funny...

Noted how our country today is "no laughing matter."

And his words for President Trump were nothing short of damning.

He wrote: "Untold American lives have been ruined by the presidency of Donald Trump. The rule of law is imperiled, our unity has been shattered, the service sector has been obliterated, and major cities are suffering."

Carrey weighed in on the BLM movement...

And stressed that, under Trump Administration, black people are continuing to suffer. "Black Americans, who have endured half a millennium of wickedness and brutality, now face more injustice and death."

He then left his readers with a lengthy and emotional plea to vote against Trump this November.

Carrey started by reminiscing about his childhood in Canada. "When I was a little boy in Canada, I watched old Superman reruns and fell in love with the United States. I was blessed to be able to come here, and to realize my wildest dreams. In 2004, I proudly became a citizen. But lately, my adopted home has become almost unrecognizable."

Carrey believes that, as a result of Trump's leadership...

America has lost it's once "heroic" reputation.

"Whatever happened to 'Truth, Justice, and the American Way'? That line was written when the Nazis were ravaging Europe and America was the hero of the world. It’s more than a line in a TV show; it’s a set of ideals we should always aspire to uphold."

Carrey then emplored for all the "snowflakes" to "create a blizzard" to get Trump out of office in a couple of months' time.

"In November, we must vote in historic numbers, gathering all the 'snowflakes' until there’s a blizzard on Capitol Hill that no corrupt politician can survive."

He finished by stating:

"We must vote for decency, humanity, and a way of life that once again captures the imagination of kids all over the world—kids like me."

Since his essay was published, opinions have been divided...

But many have come out in a flurry of support, noting that November is the "perfect time for a blizzard."

President Trump is yet to comment on the scathing article...

But, knowing our president, we're sure he'll have something to say on Twitter very soon. For more on Trump's bizarre online antics, keep scrolling to see his disastrous "Prince of Whales" Tweet...