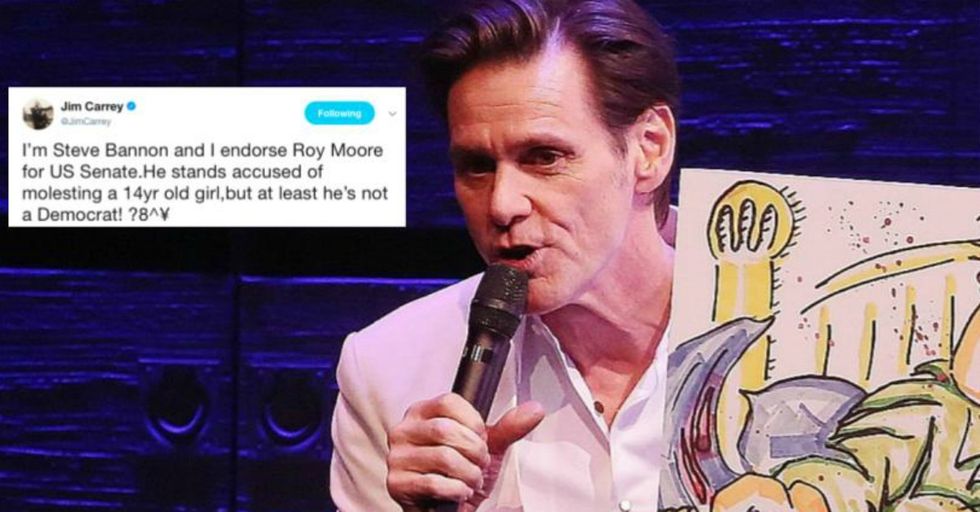 We all know Jim Carrey is an amazing actor. The star of such classics as Me, Myself, and Irene, The Mask, and Bruce Almighty, Jim has delighted us for years with his uncannily elastic face and spastic physical comedy.

But did you know he was an artist and an activist too?

This week, reports surfaced that Alabama political candidate Judge Roy Moore had sexually assaulted several women when they were in their teens and he was in his thirties.

The youngest was 14 and they reportedly had a sexual relationship. While many politicians decried the reports, a few key members of the GOP blasted the accusations, calling them a political smear campaign, and casting doubt on their timing. Moore is in a neck and neck battle for the Senate seat vacated by attorney general Jeff Sessions.

Bannon, who has returned to his former position at the helm of alt-right publication Breitbart had supported Moore when he went against Trump-supported Luther Strange in the primaries. When Moore won, many speculated that Bannon was using the win to position himself as a far-right kingmaker in the Republican Party.

Which is why many GOP members are so suspicious of the timing of the allegations. One member of the Alabama Republican Party, State Auditor Jim Ziegler, even made a horrifying analogy between the Bible and Moore's accusations. “Mary was a teenager and Joseph was an adult carpenter. They became parents of Jesus."

Suspicions aside, it is important to note that the Roy Moore story was broken by the Washington Post, which adheres to the highest standards of journalistic integrity. Furthermore, if there's one thing this age of sex scandals has taught us, it's that when more than two people come forward reciting a similar pattern, you have to squint and look deeper.

On Thursday night, however, Bannon ripped into the "Post", casting aspersions on the publication and its motivations.

"The Bezos-Amazon-Washington Post that dropped that dime on Donald Trump," Bannon said in reference to the “Access Hollywood" tape, "is the same Bezos-Amazon-Washington Post that dropped the dime this afternoon on Judge Roy Moore. Now is that a coincidence? That’s what I mean when I say opposition party, right? It’s purely part of the apparatus of the Democratic Party. They don’t make any bones about it. By the way, I don’t mind it. I’ll call them out every day." The Washington Post noted that his comments closely aligned with Moore's.

This horrific spin was the straw that broke Jim Carrey's back. The comedian, who is no stranger to controversy, tweeted an image that he'd painted of the right wing pundit.

It was shockingly good, but then, Carrey has been working on his art for the past six years. This wasn't his only picture of the situation, however...

Carrey followed up the Bannon picture with another of Roy Moore himself.

I don’t know yet if Roy Moore is guilty of pedophilia, but these allegations along w/ his religious extremism and i… https://t.co/khlO2UqvX4
— Jim Carrey (@Jim Carrey)1510348328.0

He added the caption, "I don’t know yet if Roy Moore is guilty of pedophilia, but these allegations along w/ his religious extremism and intolerance make him unsuitable for the Senate. ;^|" After all, Roy Moore was twice removed from his seat for his intolerance. Carrey's words echo those of Moore's own colleague, Senate Majority Leader Mitch McConnell. "If these allegations are true, he must step aside."