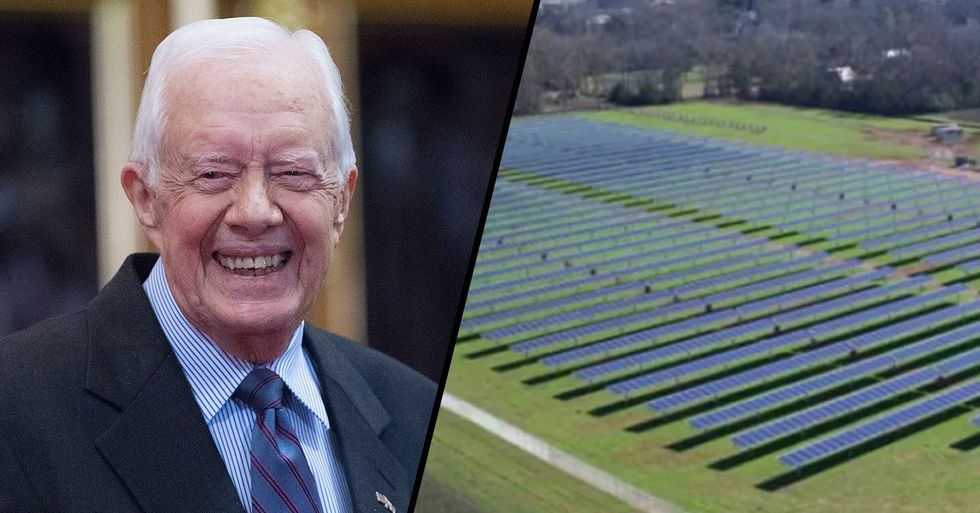 Jimmy Carter is known as being the do-gooder president; a label that worked against him during his presidency but which, of late has gained him respect and popularity.

Decades on, Carter still continues his great work.  But his latest move may be his most incredible yet...

When Jimmy Carter was 4 years old his father bought a farm.

Born on October 1, 1924, Jimmy's family was by no means wealthy. Born in the small town of Plains, Georgia to Lillian and Earl Carter, Jimmy is their oldest child. When he was only four-years-old his father bought a 350-acre farm in the nearby village of Archery. The family lived on the farm without electricity or running water.

Jimmy excelled in school and was a big reader. Despite his humble beginnings his teachers and peers alike could see he was destined for great things. In 1943, aged only fifteen, Jimmy was accepted into the U.S. Naval Academy in Annapolis.

On receiving his naval commission, eighteen-year-old Carter married Smith, who was also from Plains. On getting hitched, the newlyweds decided to move to Norfolk, Virginia. For the next six years, Carter's job in the navy took the pair to various places. They lived in Virginia, Hawaii, Connecticut, California, and New York. The couple also had their three children; Jack, Chip, and Jeff.

Carter loved the navy but returned to Plains in 1953.

Following the death of his father, Earl, Jimmy left the Navy to return home and take over the family farm. Making a profit on the farm was no easy feat and after a year, Jimmy and his young family found themselves living in public housing. It was during these years back in Plains that Jimmy realized his passion for improving the welfare of his community. His father had been particularly influential within the Plains community during his lifetime, and Jimmy wanted to emulate this. Between the years 1954-1962, Jimmy Carter took an active interest in joining local boards. Carter was particularly interested in education.

A life-long supporter of civil rights, Carter refused to be a part of the racist white movements that engulfed his hometown in the South. Growing up working in the fields, Carter recalled: "We were the only white family. I was completely absorbed in black culture. Black women took care of me. All of my playmates and friends were African Americans." His beliefs of an unsegregated U.S. led to a short boycott of his peanut farm by other whites in 1958.

In 1962 Jimmy was elected to the Georgia State Senate.

Carter served out 2 terms in the senate between 1962 and 1966. He then tried for Governor of Georgia but lost out to arch-segregationist Lester Maddox.

After 4 years, Carter was back and more popular than ever.

In 1971, Carter once again tried for the governor of Georgia position and this time he was successful. It was after this that things began to change very quickly for him...

In 1974 Carter announced his candidacy for president.

By now his popularity had grown so big that thousands of people traveled to Plains in an attempt to meet him. This even changed the economic balance of the area. From being predominantly an agricultural base, the town began opening souvenir shops and making large profits through tourist exchange. The free-thinking peanut farmer was making waves.

The U.S. was ready for a president that was for the people.

In a famous speech, as part of his presidential campaign, Carter said: "We’ve seen walls built around Washington, and we feel like we can’t quite get through to guarantee the people of this country a government that’s sensitive to our needs, that we can understand and control, that’s competent, well-managed, efficient, economical, purposeful, and also a government of which we can be proud."

Unlike his opposition, Gerald Ford, Carter was an everyman.

Ford had only taken the seat of president after Nixon had been forced to resign over the watergate scandal. The fact that during his presidency, Ford granted a presidential pardon to Nixon caused controversy. In contrast to Ford, Carter seemed like an honest choice who wouldn't be a party to underhand tactics.

Although typically the role of the president went to a candidate of a certain class, Carter's humble beginnings actually worked in his favor. After Nixon people wanted to change things up.

At the end of 1976, Jimmy Carter was elected president.

Carter was innaugrinated as 39th President of the United States on January 20, 1977.

Carter dedicated his time in office to the causes he cared about.

Primarily improving the U.S's relations with countries all over the world, improving education for children in the U.S. and attempting to bring in a national health service.

Jimmy Carter had to give up his peanut farm to become president.

Is this a good time to remind everyone that the emoluments clause meant Jimmy Carter had to give up his little peanut farm?
— Andrea Junker ® (@Andrea Junker ®)1571347254.0

Back then there was this thing called the emoluments clause which meant presidential elects would have to give up any businesses once they became president. This was done to ensure they gave complete focus to the job in hand and proved they were completely dedicated. Can you imagine if that still existed now? I think it's safe president Trump would never have run for office. Carter was willing to sacrifice his beloved peanut farm for the good of America.

The Carter family suffered intrusions from the press.

Jimmy Carter's decision to send his youngest daughter, Amy to the historic African American public elementary, Thaddeus Stevens School, caused a media circus. Amy Carter did not benefit from the "media hands-off" treatment later given to the Clinton children and was subject to much press attention for attending a regular school. By attending the public school, the Carter's put Thaddeus Stevens School on the map. It became one of the most popular elementary schools in Wahington. On the family, long-serving school councillor, Jane Jackson Harley recalled: "The Carters were just nice everyday kind of people."

Carter was dedicated to improving internal and international relations.

During his presidency, Carter created an ambitious foreign policy and strived to improve race relations within the country. At his inauguration, he said: "The time for racial discrimination is over. No poor, rural, weak, or black person should ever have to bear the additional burden of being deprived of the opportunity of an education, a job, or simple justice."

In 1978 Carter established full diplomatic relations with the Peoples’ Republic of China. Proving himself as an excellent negotiator of Foreign policy, Carter mended relations with china and worked to negotiate and mediates an accord between Egypt and Israel at Camp David (see above image.)

However, trouble stirred in 1979 when Iranian radicals broke into the U.S. Embassy and seized American hostages.

After an unsuccessful rescue attempt in 1980, public opinion of Carter diminished. Despite losing out to Ronald Reagan in the next election, Carter put all his efforts in securing the release of the prisoners. On his last day of presidency, they were released, without a thought, Jimmy and his wife went straight to Germany to greet the prisoners.

Even after his presidency, the Carter's continued to dedicate their time to politics.

In 1982, Rosalyn and Jimmy opened The Carter Center in Atlanta. The center aims are to "wager peace, fight disease and build hope," for people all over the world. Quoted on their website, Jimmy wrote: "We can choose to alleviate suffering. We can choose to work together for peace. We can make these changes — and we must."

In acknowledgement of his tireless efforts to promote and expand human rights. Carter continues to dedicate his life since his presidency in travelling the world to help those in need and to negotiate for the human rights of those who are not being heard.

Not only has he published political memoirs but he has also written rapidly about on-going American and global affairs. Aside from politics, Jimmy also writes poetry and books considering ideas around religion and faith.

"I think a good husband has to depend on having a good wife."

Jimmy Carter and Rosalynn have been married for seventy-three-years. The pair have always maintained a close bond and shared the same passions. Jimmy always considered marrying Rosalynn as the key to his successes.

"It just never had been my ambition to be rich, but rather to make the world a better place."

Ever since they left the White House they have lived in the $167,000 home Jimmy built himself in 1961 in rural Georgia. The couple live frugally and choose to shop at Dollar General and fly commercially. They also used paper plates. When asked about their lifestyle choices, Jimmy explained: "It just never had been my ambition to be rich, but rather to make the world a better place."

Carter had to get fourteen stitches above his eye and suffered a nasty bruise. This didn't stop him going out the next day to help build homes of course.

What a class act!

Jimmy and Rosalyn Carter have dedicated their lives to making the world a better place for everyone. Even well into their nineties, they continue to serve others and help in as many projects as they can.

Jimmy Carter is one of the wealthiest men alive.

Jimmy Carter and his wife of 73 years Rosalynn live in a modest house that cost less than the Secret Service SUV th… https://t.co/cztqXYbWjH
— NoelCaslerComedy (@NoelCaslerComedy)1571426848.0

By giving everything he had and living for the people instead of himself Jimmy Carter had the love and respect of everybody that knew him. - Now that is what makes a wealthy man.

Carter has always been ahead of his time...

And that couldn't truer when it comes to the climate change movement.

He infamously had solar panels installed on the White House back during his presidency.

The thirty-two-panel system was designed to heat water throughout the residence.

This was a historic move.

And happened decades before the likes of the global warming movement and activists like Greta Thunberg.

Sadly, Ronald Regan wasn't a fan of the solar panels...

And had them removed when he took office just a few years later.

But there's no doubt that Carter still remains passionate about the cause.

So much so, that in 2017, he leased ten acres of land near his home to be used as a solar farm, complete with a staggering 3,852 panels.

And the farm is going better than ever.

This is what Presidential looks like. Jimmy Carter built a solar farm in his hometown and it now powers half of t… https://t.co/YmfzEF0oF3
— Jamie Schler (@Jamie Schler)1582106380.0

Generating 1.3 MW of power per year - the equivalent of burning around 3,600 tons of coal, Upworthy reports.

It's amazing to see him continuing his great work.

It's incredible to witness how well the farm is doing. Speaking of good guys and saving the planet, Morgan Freeman has decided to dedicate his spare time to keeping and protecting bees! Keep scrolling for more on that!