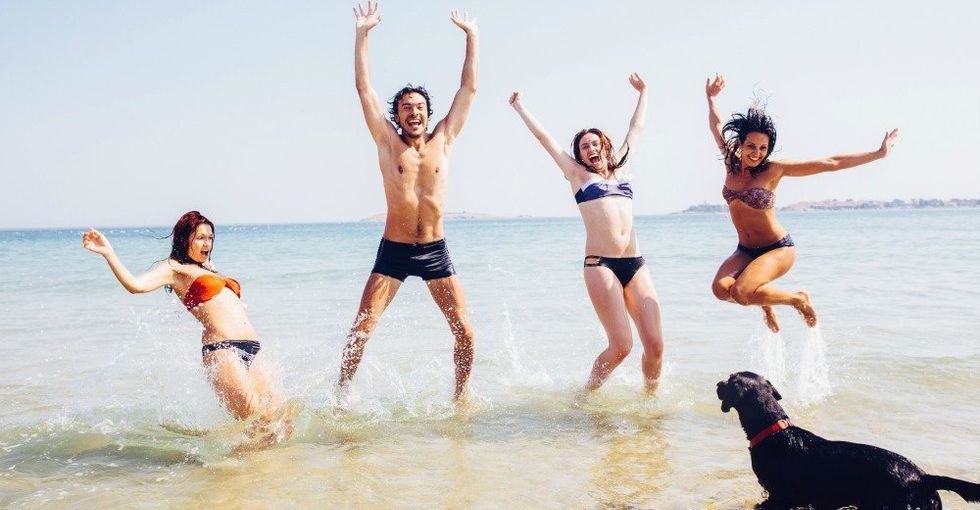 Jimmy Fallon Asked for Beach Fails and the Internet Delivered

Who doesn't love a fun-filled trip to the beach? On a hot summer day, there's nothing better than packing up the cooler with frosty cold drinks and an assortment of snacks, throwing on your favorite suit, slathering on the sunscreen, and catching some epic waves as you soak up the sun and become one with nature. It's the perfect way to connect with family and friends and usually results in some good laughs, good exercise, and good old-fashioned fun that you just can't get indoors.

Except when it doesn't.

The following people reveal their biggest beach fails, which range from accidental exposure to humiliating experiences with a few disgusting surprises thrown in. You're going to want to wear your lifejacket for this one, folks. The secondhand embarrassment is so strong it'll leave you cringing for days afterward. (And make you reconsider that trip to the beach you have planned at the end of the month.)

This call to action.

If you've been to the beach often enough, you've probably experienced a beach fail or two. And Jimmy Fallon wants to hear about it. And you apparently do too, since you're reading this article. Luckily for everyone, the internet delivered.

I know it sounds mean, but I laughed heartily at this guy getting screwed over by his own selfish behavior. Find a random house key? Why spend 5 minutes trying to find its owner when I could throw it in the ocean instead?

@jimmyfallon My cousin had a beach wedding. I’m a very pale redhead. I put on so much sunscreen that the flash from… https://t.co/GyNurJ0Ldf
— Brittany Rhoades (@Brittany Rhoades)1563379003.0

As a pale redhead myself, this one hit home for me. I'm sure I've ruined countless wedding photos for this exact reason.

Hey, they've got to learn about the human body one way or another, right? Why not bombard them with an entire beach full?

@jimmyfallon I let my daughter nap on the beach until a concerned man came and asked if she was my daughter. Then… https://t.co/1JFRzcycPd
— Colleen mayes (@Colleen mayes)1563380936.0

So, instead of a "dirt" nap, would this be called a sand nap?

I'm sorry, but if you're willing to eat a Cheeto that you find on the beach, you deserve for it to turn out to be seagull poop. Seriously, though, I'm worried about that seagull. Was it radioactive?

@jimmyfallon First time paddle boarding. Got no instruction from the harbor rental people. Later I was notified via… https://t.co/hmpYbZnSPC
— Austin 🎃 Holm (@Austin 🎃 Holm)1563385588.0

Sure, this guy experienced something extremely embarrassing, but at least he brightened the day of each and every person on that ferry who had the joy of witnessing it.

@jimmyfallon #BeachFail That time I was eating a sandwhich while walking on the beach and I was attacked by MANY se… https://t.co/tbwAhTcBZC
— Terry (@Terry)1563411064.0

This story goes from bad to very bad to change-your-name-and-never-go-to-that-beach-again bad.

If you go to a dog beach, you're probably going to get peed on. He should consider himself lucky that is wasn't something worse.

Hey, maybe it was a tattoo of something sweet like the word "Dad" surrounded by a heart! ....but it was probably a tribal tramp stamp.

@jimmyfallon Family trip to the coast. Sister drank too much of the salt water and spent the entire vacation puking… https://t.co/mtklE6nbGl
— Russ4MVP (@Russ4MVP)1563379277.0

Isn't drinking any saltwater considered drinking too much saltwater?

Am I the only one who wants to party with Jeff's wife? Call me, Linda!

You'd think the handcuffs and chains would have been a dead giveaway.

As someone who lives very close to Chicago, I can confirm that "Is that a sea creature or a dead body?" is a game that we play regularly on every trip to the beach.

@jimmyfallon I took my 9 year old son to a beach in Northern California. I noticed he kept putting his hands down h… https://t.co/lZpUVlgMTZ
— RWright (@RWright)1563570885.0

My son is only two months old, and I'm grateful for the fact that he's not yet old enough to shout humiliating things in front of hundreds of people.

They ran into the water like little school girls, and I'm sure they ran out like ones as well.

@jimmyfallon My family camped on a beach at a lake. It rained a lot one day and the lake waters rose quickly and my… https://t.co/YYtywmzh9D
— Lily Soliloquy (@Lily Soliloquy)1563427176.0

At least this taught them a valuable lesson on how far away from a lake you should park your car. And that camping, in general, is usually a bad idea.

This waste of money.

Considering this was this guy's idea of "taking care of" something, he should probably never have children.

@jimmyfallon My kid was more interested in the family behind us and spent half an hour talking to them instead… https://t.co/xnDi7CzUOk
— Jaclyn (@Jaclyn)1563385795.0

I get it, little girl. Your family is old news. Whatever's going on in the next tent, it has to be more interesting than what's going on in yours.

@jimmyfallon When I was a kid, we would feed the seagulls and my dad would purposely throw bread over my head to sc… https://t.co/2p2bP42LHL
— Haley Sakewitz (@Haley Sakewitz)1563410186.0

This parenting style leaves something to be desired. Does he also dress up like Michael Myers and chase her around with a knife and then wonder why she suffers from crippling anxiety?

@jimmyfallon My sister got married at a “private” beach wedding in Florida. A drunk fisherman showed up and is almo… https://t.co/8eyMAuiLGU
— Heather H (@Heather H)1563433302.0

This wedding was totally lame before the drunken fisherman showed up. I bet he and Jeff's wife would make an unstoppable duo.

@jimmyfallon Had our umbrella up and a huge gust of wind blew it away almost impaling a small child in front of his family. #Beachfail
— Clair Gregorchik (@Clair Gregorchik)1563466665.0

Ya know what would instantly ruin an idealistic trip to the ocean? Impaling a child with a beach umbrella.

Sometimes I'm the angry infant when I go to the beach. Sure, I don't eat fistfuls of sand to express my frustration, but when it gets too hot and crowded I've been known to throw a pretty epic tantrum.

Remember this story the next time you find a suspiciously empty beach on a beautiful summer day. If it seems too good to be true, there's probably a ton of triathletes about to kick sand all over you.

@jimmyfallon Accidentally let go of my daughters hand when we were doing a "jump" beach pic! #BeachFail some might… https://t.co/mMidIl1fqg
— Kelly Rowold (@Kelly Rowold)1563379361.0

Those "jump" pictures never, ever turn out. But please never stop attempting them, because they result in pictures like this.

I have a feeling that that bird knew exactly what it was doing. The result: comedy gold.

@jimmyfallon There's also that time where some dude was like let me introduce u to my pet firulais, which is litera… https://t.co/f9bJDCvzcG
— Fabi (@Fabi)1563380186.0

At first, I felt bad for this poor little guy, but then I realized that he could simply snip his leash and free himself whenever he chooses.

@jimmyfallon My friend said, “hey there’s a sea creature which looks like my purse”. When we looked closely, it was… https://t.co/1GdF8npTNr
— Jessica Kaur Pahwa (@Jessica Kaur Pahwa)1563385177.0

The reason this was confusing was because her purse was shaped like a blobfish.

@jimmyfallon When you think you found a really cool rock, but then later you just realize it’s dog poop. #BeachFail
— Nicole (@Nicole)1563381517.0

I can't picture dog poop resembling anything "really cool" unless that dog happened to eat a handful of diamonds before doing its business.

@jimmyfallon @FallonTonight I fell asleep on the beach and my friends laid goldfish all over me. The next morning I… https://t.co/neOi2bFVOi
— Katie Maye (@Katie Maye)1563426215.0

I can honestly see the "goldfish tan" turning into the next Instagram trend.