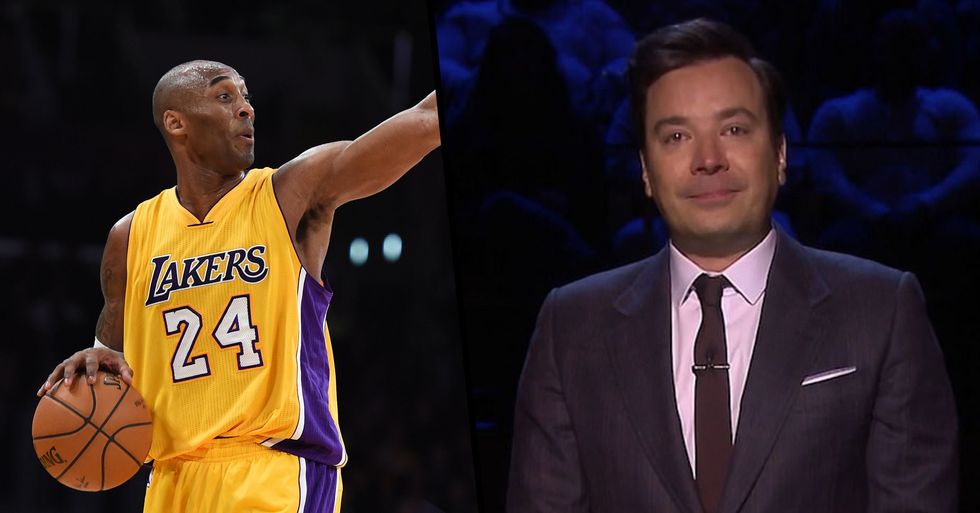 The internet's heart was broken when it was revealed that legendary NBA player, Kobe Bryant, had died in a helicopter crash on Sunday morning. He was just forty-one-years-old. 9 people are now confirmed dead.

Tributes have poured in for the star from celebrities and fans alike. Jimmy Fallon delivered a heartfelt speech about Kobe and broke down in

It has been confirmed that Kobe Bryant has tragically died in a helicopter crash on Sunday.

And he really loved being a dad.

The late-night host dedicated a monologue to the late basketball star where he spoke about how the 2 had initially met while they were finding their feet in Los Angeles and how close they grew to be.

"I met Kobe when he was seventeen and I was twenty-one. He was a rookie on the Lakers and I was just starting out in the comedy scene in LA."

Their friendship began after bumping into each other at a party.

"We didn't know anyone at the party so we just started talking. I said like 'hey, what do you do' and he said 'I play basketball.' I asked 'where?' and he said 'for the Lakers.'"

They instantly hit it off and spent the majority of the night talking.

But then it was time for a beer run, so Kobe volunteered to do it and asked Jimmy to come along with him. So fast forward a short car drive, they both found themselves at a store that refused to sell them anything because their policy revolved around "delivering orders."

So you'll never guess what the basketballer did...

He pulled out his ID and pressed it up against the glass and said: "I'm a Laker." And that's all it took.

The 2 left the place with 5 cases of beer in their hands.

"Yeah and we saved the party," Jimmy laughs, recalling the memory. "We said 'goodnight' and then obviously Kobe went on to become a legend..."

His face then becomes sombre as he talks about Kobe's accolades.

"And when we'd run into each other over the years, we would laugh about the night we met..." His voice cracks and his breathing becomes heavy. Knowing he must continue, he muffles his sobs with his hands and tries to deliver the rest of his speech as coherently as he can.

"We'd laugh about the good things that had happened since."

"We laughed about how fun it was to raise kids and all the stupid mistakes we made trying to figure out how to be good dads..."

He talked about his own family and his daughters.

"I have 2 daughters... And today he and one of his girls are gone," he bites his lip and wipes tears from his eyes.

He then honored his long-time friend, his daughter and the other victims.

"Let's honor [them] by following his example. Love your family, love your teammates and outwork everyone else in the gym. To Vanessa and all those affected by this tragedy, we love you and will always be there for you."

He ended his monologue with a touching message, addressing it directly to Kobe.

"Kobe, when we meet again, we're going for a beer run."