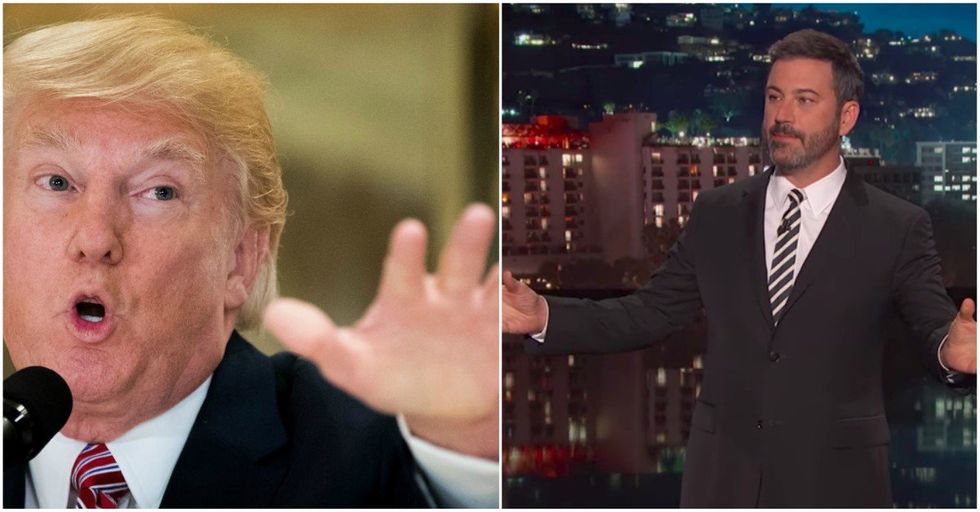 Instead, he laid out a genius plan that just might save us all from our own president...

After taking days to denounce white supremacists after the horrible violence that erupted in Charlottesville this past weekend, President Trump defended white nationalists in a press conference Tuesday afternoon. Yes. The President of the United States did that.

He told reporters that, "I watched those very closely, much more closely than you people watched it."

Oh, and if that's not bad enough, as he exited the podium he plugged one of his business ventures.

Apparently he owns the largest winery in Charlottesville and wanted everyone to know that. What is even happening anymore?

So, while that chaos was unfolding, the Jimmy Kimmel Live writers were prepping their show.

It didn't take long before they started scrapping the silly jokes they'd been working on and instead devoted their full attention to covering this press debacle. As they were rewriting their entire cold open, the team concocted an epic plan.

Jimmy Kimmel announced his brilliant idea on air later that day for exactly how this country could finally rid itself of Trump...

Guys, this plan might just be genius. But, it's better if Jimmy just tells you all about it himself...

In Jimmy's cold open, he revealed exactly how we the American people can navigate our way out of this Trump drama once and for all.

King Trump! Sounds fun. Maybe he could even get a few corgis and everything.

Response to Jimmy's segment has since taken the Internet by storm.

People from all sides have started weighing in with responses. Many people are calling Kimmel's segment a must see.

Both conservative and liberal folks have started chiming in on Twitter.

What do you think about Jimmy's monologue? Who do you agree with?

All in all, many have found solace in Jimmy and the other late night comedians' monologues.

During such a tumultuous time, it's comforting to know that leaders throughout our community will continue speaking out against hate. They will continue standing up for everything America is meant to be.

Amidst times these of great struggle and violence, something as seemingly unimportant as a late night talk show espousing love and acceptance might be just the thing that helps us all make it through.

Or at least fire us up for the hard work ahead.