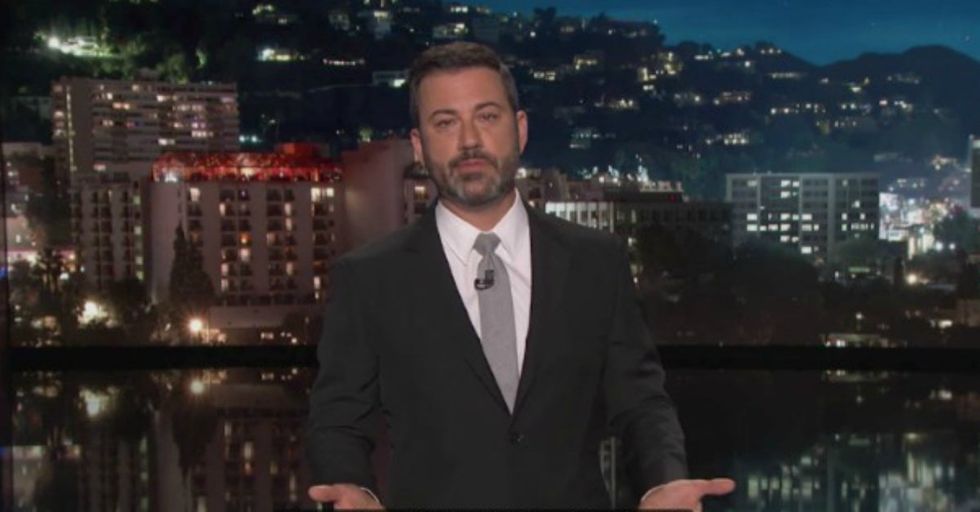 In the wake of Sunday night's tragic shooting in Las Vegas, the reactions have been vast and varied. One of the most emotional responses occurred on last night's episode of Jimmy Kimmel Live! He spoke about the tragedy of loss, the hypocrisy of some politicians, and how we should all be applying common sense in order to keep things like this from happening ever again.

Jimmy Kimmel's monologue last night featured the late-night host fighting back tears as he spoke about the shooting in Las Vegas and the country's need for better gun control laws.

He had many salient points and delivered them all in such a moving monologue. It's truly one of the most emotionally moving speeches you'll see in the wake of this tragedy.

Kimmel began his monologue by describing just how terrible it is that as a result of the shooting, there are children waking up in their homes without parents.

"We have children without parents, and fathers without sons, mothers without daughters, we lost two police officers, we lost a nurse from Tennessee, a special ed teacher from a local school here in Manhattan Beach...It's the kind of thing that makes you want to throw up or give up."

Kimmel said that he's read many comments online saying that while it's awful that the shooting occurred, there's nothing we can do about it.

"But I disagree with that intensely, because of course there's something we can do about it." Kimmel then pointed out the hypocrisy of people rushing to tap phones, invoke travel bans, and build walls "when someone with a beard attacks us" in order to make sure it doesn't happen again. However, when an American kills other Americans, there's suddenly "nothing we can do about it."

Kimmel had a perfect response to Sarah Huckabee Sanders saying that now is not the time for political debate.

"I don't know," Kimmel said. "We have 59 innocent people dead. It wasn't their time, either." Kimmel then pointed out that while President Trump has said that he is praying for those who lost their lives, but in February, he signed a bill that made it easier for people with severe mental illnesses to buy weapons. Kimmel said that there were a number of senators who won't do anything but pray "because the NRA has their balls in a money clip." "They should be praying. They should be praying for God to forgive them for letting the gun lobby run this country."

Then Kimmel got specific, showing the faces of senators who — just a few days after the shooting in Orlando that took place on June 12, 2016 — voted against a bill that would have closed gun control loopholes.

"These are the 56 senators who didn't want to do anything about that," Kimmel said. Kimmel then said that 90 percent of Democrats and 77 percent of Republicans support background checks at gun shows. 89 percent of Democrats and Republicans are in favor of restricting gun ownership for the mentally ill. "But not this gang. They voted against both of those things." "So, with all due respect," Kimmel said, "your thoughts and your prayers are insufficient." Kimmel then had an important lesson about common sense for everyone who was watching...

"I just want to laugh at things every night, but that seems to [be] becoming increasingly difficult lately...It feels like someone has opened a window into hell."

"What I'm talking about tonight isn't about gun control. It's about common sense," Kimmel said. "Common sense says no good will ever come from allowing a person to have weapons that can take down 527 Americans at a concert. Common sense says you don't let those who suffer from mental illness buy guns."

Kimmel then provided a story from his childhood that hit his point home.

"In 1980, we had a big fire at the MGM, a hotel in Las Vegas. It was horrible. 85 people died...I was 13 years old; I'll never forget, I saw a man jumped out the window," Kimmel said, again choking back tears. "And then, a few months later, there was another fire at the Hilton and five people died. So you know what they did? They changed the laws. They made major changes to the fire safety codes, and it hasn't happened again. Why would we approach this differently?"