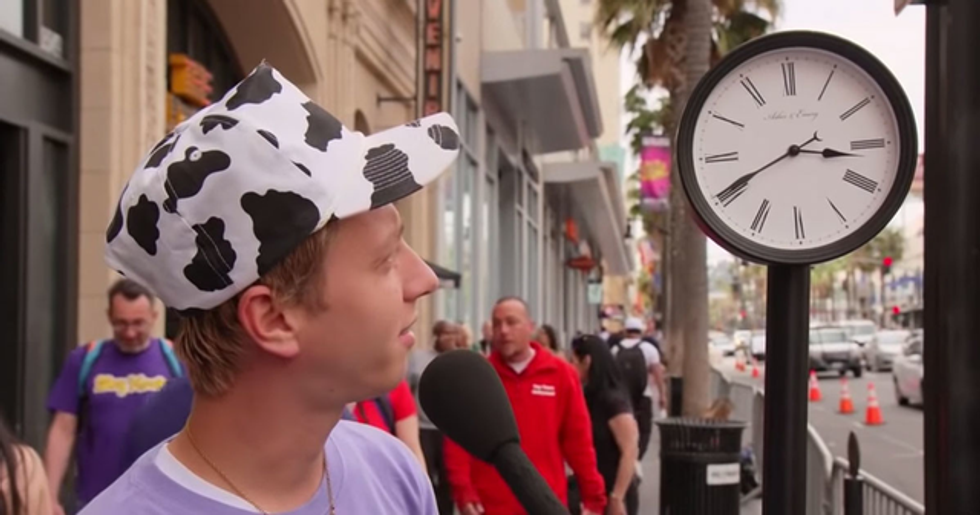 It seems that millennials are pretty much universally criticized online. Whether it's their propensity for avocado toast or their aversion to purchasing a house, it seems that there's always something they can be vilified for. But the latest reason they're being hated on might just be the funniest of them all.

There's a new segment on Jimmy Kimmel Live, entitled, "Can You Do It?". During this segment, Kimmel takes what's seen as a pretty basic human skill, and tests whether the average man or woman on the street can perform it. And the results of this week's segment have been pretty shocking. Kimmel takes a bunch of unsuspecting millennials, points them towards an analog clock, and asks them to read the time, and (as you may imagine) it produced hilarious results.

The multi-talented star is not only a presenter, but also works as an actor, comedian, writer, and producer.

But on top of that, he seems like a genuinely nice guy.

Kimmel is known for a range of different philanthropic causes, including focusing on environmental change. He's also worked in fundraising for the Democratic party.

Kimmel is one of the most trusted hosts in TV history.

He's hosted the Primetime Emmy Awards twice (in 2012 and 2016) to much online appreciation.

He's also had the honor of hosting the Academy Awards twice, too. Kimmel presented the prestigious TV event in 2017 and again in 2018.

But there's no denying what Kimmel is best known for.

Kimmel is the host and executive producer of Jimmy Kimmel Live!, a late-night institution that has been running since 2003.

Jimmy Kimmel Live! has a ton of highly popular segments.

But among the best is surely the iconic "Celebrities Read Mean Tweets" in which celebrities ... well, read mean tweets about themselves, live on camera. It's as hilarious as it is brutal.

But the show is loaded with other funny ideas.

And Kimmel's latest segment (particularly the first airing of it this week) has really got the internet talking.

And the premise is fairly simple. Kimmel's team hit up the general public, asking them if they can do some fairly basic tasks. But his very first episode had pretty hilarious results.

The theme of this particular segment was telling the time.

But it wasn't any old clock that Kimmel was working with. He wanted to test whether people (in particular, millennials) could read the face of an "old-fashioned," analog clock.

And the results were pretty shocking.

Sure, perhaps we would expect some people to take a little longer to figure out an analog clock since we're so used to digital these days, but the ineptitude of some of the millennials that Kimmel found was pretty hysterical.

He introduces the segment by explaining his curiosity.

“Times have changed a lot over the last thirty years, even the way we tell time has changed. When I was a kid, in school I’d have to tell time, they’d have the thing with all the clocks and you had to write in the time," Kimmel explained.

But nowadays, an analog clock is rarely a part of our everyday lives.

"Now we all just have phones and we just look at it and we know," Kimmel went on. Even on our computers, ovens, or microwaves, the clock tends to be digital.

Maybe if phones looked like this, things would be different.

But, unfortunately, knowledge of the analog clock is just not something that heavily features in our day to day lives - and those who never needed to read an analog clock, likely never will.

So, as you may have guessed, the success rate wasn't very high.

In fact, people were pretty shocked at the fact that it seemed as if no one under the age of thirty seemed to be able to grasp telling the time on an analog clock.

The lack of analog presence in today's world Kimmel "wonder if young people even know how to read an old time clock anymore." So he sent out a camera crew to find out.

And the results were pretty funny.

The camera crew started by asking people if they could help out with something - and received an enthusiastic "yes" in response.

But then the task was revealed.

And almost universally, the millennials crumbled under the pressure when they were put head-to-head with an analog clock face.

Many fumbled for an answer, saying any old time that they could think of.

But others had a different reaction. One was asked, "Would you like to say anything to your teachers in college?" She responded with a sheepish, "No."

But there was one moment that got everyone laughing.

An overconfident guy took one look at the clock and declared the time (which was clearly mid-afternoon) to be 8:17. But the smile was swiftly knocked off his face when he was asked, "A.M. or P.M.?"

And as hilarious as it is, it seems that the analog clock problem is pretty widespread. We're wondering whether analog faces will die out entirely over the next few generations. Because the kids of today can't read analog clocks and it's causing problems - and, apparently, analog clocks aren't the only thing that children are struggling to use. Keep reading to find out the strange thing that may be dying out alongside these "old-fashioned" clocks.