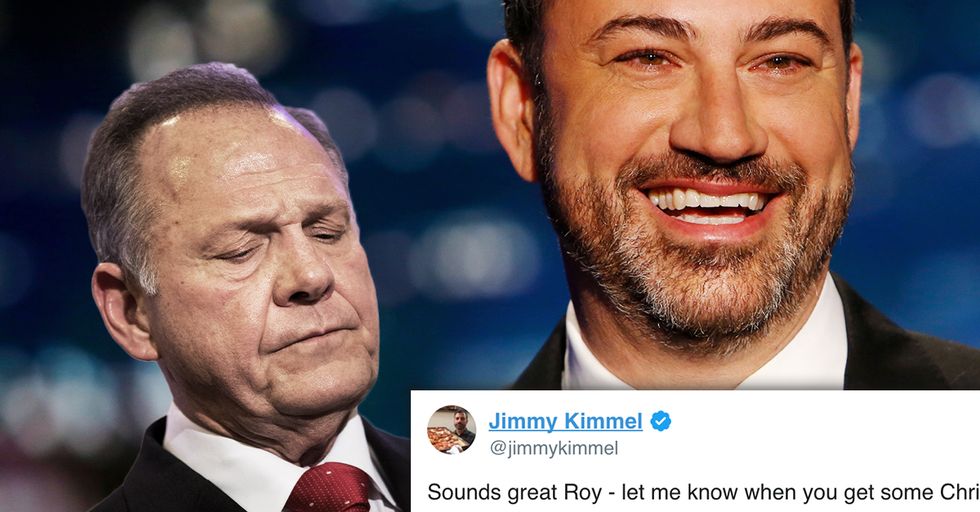 Roy Moore is the Republican nominee for the Alabama state Senate seat. He's been repeatedly endorsed by Donald Trump. He's also been repeatedly accused of sexually assaulting, harassing, and stalking teenage girls when he was about twice their age.

It's not a good look, but because the GOP has no backbone or morals, he's still in the race, and now he's doing more foolish things, like challenging Jimmy Kimmel to a fight.

As you can probably imagine, it didn't turn out very well for Roy Moore...

Roy Moore was recently speaking at an Alabama church when protestors started yelling things because, you know, he's a pedophile.

One of the people yelling was a pro-Moore guy who shouted that Moore is a "man's man." "Does that look like the face of a molester?" he shouted. "Does that look like someone who hits on teenage girls?" This guy (who was eventually escorted out of the event) turned out to be comedian Tony Barbieri, who is most well-known for appearing on Jimmy Kimmel Live! as a character named Jake Byrd.

Well, Roy Moore did not take too kindly to finding out this guy was a comedian with ties to Kimmel, and so he thought it wise to challenge Kimmel to a fight.

He taunted Kimmel, telling him to "come down here to Alabama" and "mock" his "Christian values" "man to man." Icing on the cake is that Moore linked to a Brietbart article covering his challenge. And the icing on that icing (this cake has a lot of icing) is that you can see in the preview of the article that Brietbart got Tony Barbieri's name wrong. They call him "Rich Barbieri." C'mon.

Of course, Jimmy Kimmel was quick with the perfect comeback:

@MooreSenate Sounds great Roy - let me know when you get some Christian values and I’ll be there!
— Jimmy Kimmel (@Jimmy Kimmel)1512071859.0

Moore didn't learn his lesson though. He responded with the oldest cliché in the book.

Kimmel being Kimmel, he clapped back with the perfect message for Roy. It was truly the nail in the coffin of Moore's ill-advised beef with the comedian.

Ultimately, Kimmel accepted Moore's request to fight, and honestly, we can't wait to see it actually happen. We are assuming that it will actually happen. Obviously, the Internet had a lot to say about this golden exchange...

This response to Moore's challenge is savage...and hilarious.

You know, because Roy Moore likes to prey on children? He was actually banned from a shopping mall because of his habit of pursuing teenage girls when he was in his 30s. Ew ew ew.

Like we said before, Moore's claim that "Hollywood elites" like Kimmel are bigoted toward southerners is just plain wrong.

You want to talk bigotry? Talk about how Roy Moore won't even debate his opponent Doug Jones because he thinks Jones' position on transgender rights is too liberal. Yes, that's real.

Roy Moore made such a big show of challenging Kimmel, but if you look at his own behavior, he's a giant wuss.

He won't debate Doug Jones, is seemingly terrified of transgender people for no reason, and preyed on children. Not quite the "man's man" he thinks he is.

Moore was pretty bold to appeal to "Christian values" in his challenge to Kimmel, and this Twitter user was kind enough to point that out:

@MooreSenate @jimmykimmel He has more Christian values in his pinky finger than you do in your whole body Roy. Jimm… https://t.co/wQoCZYe7FJ
— PoliticsMichael (@PoliticsMichael)1512142355.0

Call us crazy, but molesting teenage girls doesn't scream "Christian values" in our faces. Quite the opposite, in fact.

Roy Moore kept trying to get up and get his punches in, but Kimmel shoved him to the floor and stood over him while he flailed and cried. And we all got to watch. Too good.