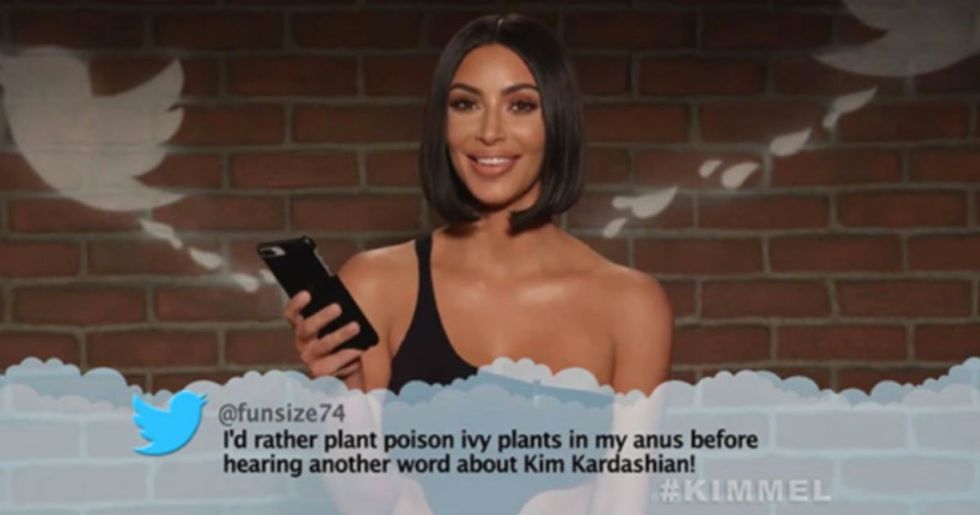 When Jimmy Kimmel aired the first edition of "Mean Tweets," we couldn't help but get hooked. There's just something about watching celebrities fumble over reading criticism from a bunch of nobodies that really tickles the funny bone.

But after sending the segment on a little hiatus, after two years, it's finally back to grace us with its presence. Now, another lot of big-name celebrities are ready to take on wannabe Twitter users in the war of the insults. Keep scrolling to see this season's newest edition of celebrity "Mean Tweets" as well as a list of the most savage ones since 2012.

I must say, Blaine does have that tired look going on but, hey, he makes it work.

Her forehead isn't even that big! People will just pick anything these days!

I mean there's nothing wrong with being "vanilla," right?

I can confirm that Zac's roles are not limited to just playing douche bags... Troy Bolton, duh!

Don't even start. There's nothing wrong with Nickelback.

What happened, I hear you ask? Time, my friends. It catches up with us all.

"Mushy in the Middle," doesn't have the same ring to it, so that doesn't count as an insult.

"Well, you must have a pretty a**hole." Chloe wins that round.

Woah, what can you possibly have against Lisa Kudrow???

That sounds like every friendship group in high school...

I think Jake's got a very lovely face.

That's pretty definite. He is Yoda.

Ugh, we get it, Goldblum, you're quirky. Whatever.

HE DOES SCREAM A LOT, DOESN'T HE?

Um, I think I would rather hear about Kim. Sorry.

It's the #truf (I'm guessing that's the cool way of spelling "truth.")

Zendaya's reaction to this comment was amazing. She picked up her red bottom shoes and gave them a little sniff claiming that they "smelled like success."

I don't think he looks too much like a creep... Do you?

It seems as though Twitter users really love abusing Jake Gyllenhaal. First the pug face, now this? Get off his back!

I've never really thought about it. And I'm glad I never have.

"Well if you'd lost all your money during a divorce, you would have been on Grown Ups 2, too!" Yikes.

If there's one person on this planet I would never want to mess with, it's Tiffany.

And to everyone abusing celebrities online: Stop.