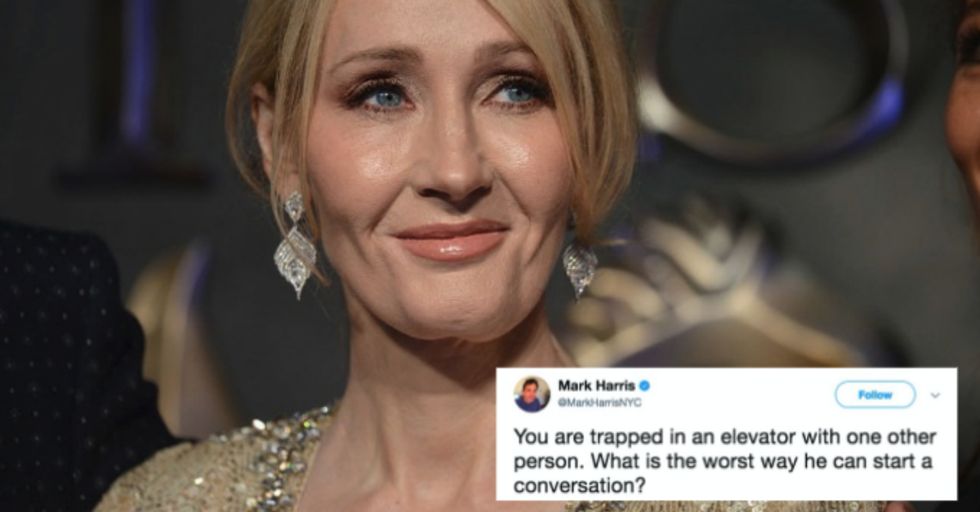 J.K. Rowling Just Shared the One Question from Fans She Hates Answering

Being famous is probably pretty awesome...except when it's not.

Like, it's probably super great to have disposable income, worldwide recognition, and a verified Twitter account, but being a household name definitely has its drawbacks at times. Imagine not being able to go out to buy groceries without being asked for an autograph, or having the paparazzi wait outside your door for you to make a move. Not so glamorous.

J.K. Rowling is one of the most famous people on the planet. She's also one of the best humans ever, but as it turns out, even she has her limits...

It's true. We all voted and she won. But seriously, if you haven't seen J.K. Rowling's many fantastic tweets, you are definitely missing out. One of the best things about her Twitter is that she often uses it to answer questions from her fans.

For instance, when people asked why (spoilers!) the Horcrux inside Harry isn't destroyed when the Basilisk bites him in Chamber of Secrets, she gave a very reasonable answer.

William Shakespeare never had to deal with his fans e-screaming at him in all caps. Hopefully this question can now be laid to rest.

Here's another question from a Fluffy fan:

It's nice to know that Rowling has given so much thought to the characters in the books — even the ones who only appear a couple times throughout the series.

Not all the questions Rowling answers are Harry Potter-related, however. Here's what she said when one fan asked about her favorite kind of tea:

But when Rowling responded to journalist Mark Harris' Twitter poll, we all learned a very important lesson.

He didn't even pose the question to Rowling herself. Anyone could comment on it. He wanted people to share the worst way to start a conversation while trapped in an elevator with someone. Rowling didn't answer with one of the available answers. So what is it? What's the one question that J.K. Rowling can't stand to answer? Is it a question about yet another perceived plot hole? Is it a question about the post-book lives of the characters? Maybe it's simply asking for some of her money? Nope! It's none of those. Instead, the no. 1 most annoying question to J.K. Rowling is about something you might not expect...

The completely fictional, 100 percent made up sport of wizard soccer (kind of). All right, so what's the question?

Whatever you do, don't ask J.K. Rowling about the Snitch.

(We're assuming Bludgers and Quaffles are still totes on the table, though.) Apparently, this is one that Rowling gets all the time. It's not hard to imagine how annoying that might become.

What's the deal with the Snitch, anyway?

For those who don't remember, the Golden Snitch is the tiny, golden ball with wings that flies around throughout a Quidditch game. When the Snitch is caught by a team's Seeker, that team gets 150 points and the game is over. According to Quidditch Through the Ages (a book which only exists in-universe), the longest Quidditch game ever lasted for three months. Apparently, a lot of people feel the need to point out to Rowling that the team that catches the Snitch "always" wins.

But that's simply not the case.

In fact, *pushes glasses up nose* Readers will recall that in Goblet of Fire, Viktor Krum (of Bulgaria) caught the Snitch during the Quidditch World Cup, ending the match and bringing Bulgaria's score up to 160. However, Ireland had already scored 170 points. Thus, Ireland won the match without catching the Snitch.

What do you say to that, Snitch haters?

You forgot about Krum! You also forgot that J.K. Rowling literally wrote the books on this sport, so she can say the rules are whatever she dang well wants them to be. So there you have it. Don't ever step to J.K. Rowling when it comes to the rules of Quidditch. However, there is one question we're still dying to know about the Harry Potter Universe...

How many people go to Hogwarts?

She's said approximately 1,000 students attend the school, but the math just doesn't add up. *pulls out calculator* Harry's dorm only ever has five boys in it — himself, Ron, Seamus, Neville, and Dean. Multiplied by seven years (and doubling that number for the girls in the house), that's only 70 Gryffindors total. That means there are only approximately 280 students at Hogwarts. Which is nowhere near 1,000! Explain yourself, Ms. Rowling!

Let's be real, though. If any of us ever end up in an elevator with J.K. Rowling, it'll go something more like this:

Too accurate. But at least now we know what not to ask!