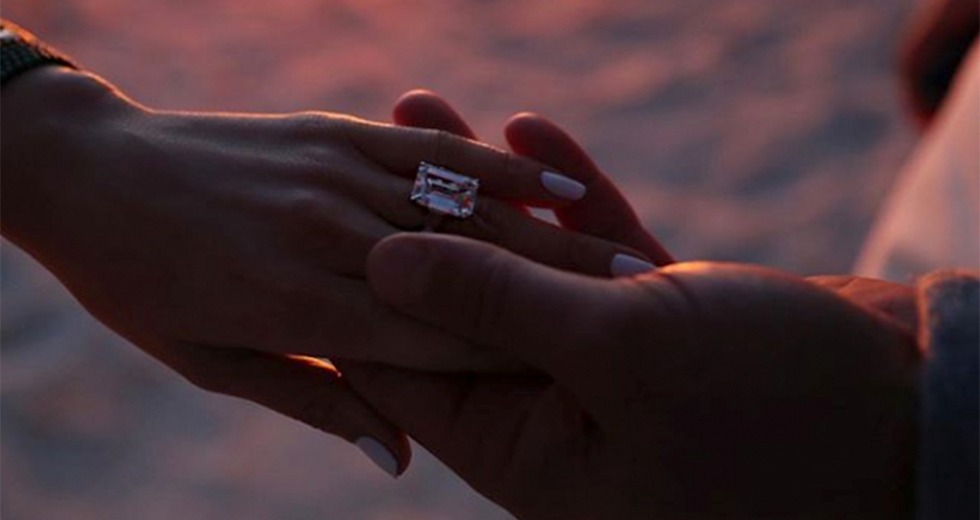 Guys, it's finally official, after over a year of dating, another celebrity power-couple is tying the knot. JLo and A-Rod are having a wedding where I can only imagine every guest's name will be shortened to a first initial and last couple of letters. I expect an invite, of course. And I guess I'll sit on the Bride's side, as my name does start with a J.

There's no date set because they just got engaged, but you can be sure to be hammered over the head with one once it's finally announced. I'm just out here hoping they televise it, Bachelor-style. And if they don't, well, they're missing out from millions of dollars from this thirsty American public. No judgment, America.

Side note, does anyone but me love a good celebrity engagement where both celebs are past their primes but still settle down with a filthy rich partner because why the heck not? I image their lifestyle is just insane.

JLo is getting married again.

We didn't try to make that sound as eye-rolly as it did, the facts just came out that way.

They shared their engagement where all celebs share important news these days.

Instagram. Because, you know, she has 88.5m followers, so we're not going to knock her.

Alex officially asked over the weekend while the couple was vacationing.

I don't need to get engaged, I just want to have enough money to go to wherever they're vacationing. Is that too much to ask?

What if he had posted the ring on Instagram with the caption "She said no ?". Honestly, would have been the post of the year.

The 43-year-old former Yankee posted the same photo on his Insta while they held hands.

I really want to know who took this photo. Because on one hand, it looks really nice, but on the other hand, it looks like it was taken on an iPhone.

That's a really specific hope, but it's real.

People Mag claims the engagement was a total surprise.

Always a risk, A-Rod. But I guess when you've spent most of your life as a professional athlete, you don't really get nervous anymore.

They made it official in the Bahamas.

Okay, that's a reasonable vacation spot. I was expecting like Richard Bronson's private island or something.

And despite it being a total surprise, JLo was "ecstatic."

Once again, it would be super weird if People Magazine reported her as being "lukewarm," but we're not here to judge. I bet she really was thrilled because they're super cute together.

This is JLo's fourth engagement.

Again, no shade, all facts. She was previously engaged to (and then married) Ojani Noa, Cris Judd, and Marc Anthony. In case you'd forgotten.

JLo also has two twins from her marriage to Marc Anthony.

Alex has kids of his own as well.

Two kids with his ex-wife of 10 years, Cynthia Scurtis.

It has not been a quiet relationship for the couple over the last two years.

Us Weekly reported way back in 2017 that the couple was close to getting engaged.

In their words, Alex was, “clearly seriously thinking about marriage." And, while they got their timeline wayyyyy off, Alex's dream has finally come true.

“We are very much twins."

Poor choice of words... but let's hear him out.

Jose Conseco had this to say about the engagement.

Watching World of Dance watching J.Lo text Alex Rodriguez little does she know that he is cheating on her with my e… https://t.co/jrcSLtzcVW
— Jose Canseco (@Jose Canseco)1552266473.0

Tbh, I only know what like half of those words mean. Can someone decode?

How about we take a walk down memory (Instagram) lane for the happy couple?

Because honestly, do you have anything better to do today? I know I don't.

ARod first appeared on JLo's Insta back in 2017 in this not-so-sly shot of the two of them watching the Yankees play.

Seems like Alex is still a fan even though he's retired!

And his face first appeared in this dapper picture.

The couple was on their way to the Met Gala. What a way to announce!

The posting never slowed down.

Each photo they only got cuter and cuter.

Including this series of photos from their "baecation" in France.

Totally stealing baecation by the way!

The couple was seen looking fine af (if I may say so myself) at Lopez's birthday party.

And another cute one from later that night.

For my next birthday, I'm going to hire a professional photographer to take photos of me and my lonely self.

This photo was taken right around the time Alex was thinking of proposing.

And you can see why! They look so happy.

They frequently shared photos of their workout routines on Insta.

And who could blame them? They're both in insane shape.

Here's a photo of them with disgraced Patriot's owner Robert Kraft.

For no reason other than I think it's funny that he's going to jail. Carry on.

Have I mentioned how jealous I am of their lifestyle?

I don't even think my imagination could afford that car.

A different breed than Robert Kraft, for sure.

And here they are in Italy, possibly wedding planning??