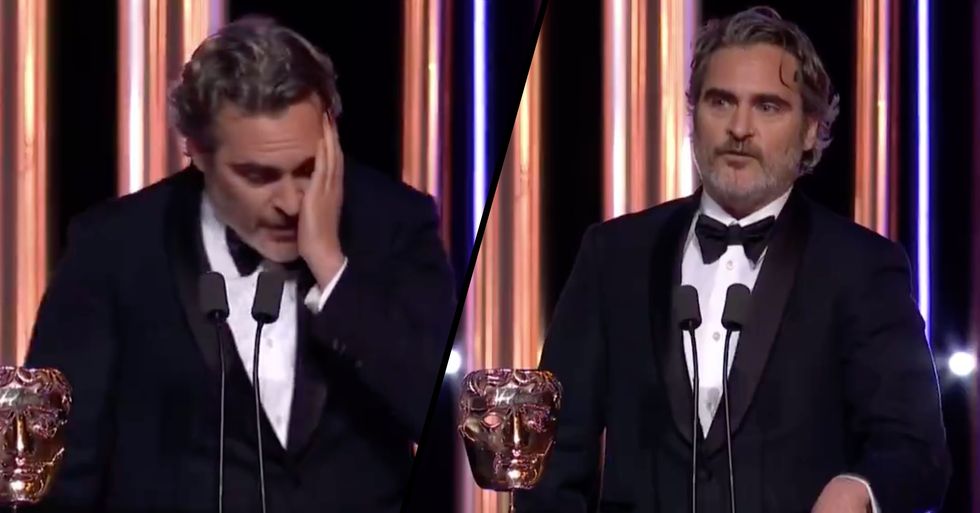 But one moment that stood out from the rest has to be Joaquin Phoenix's heartfelt speech about how systematic racism plays a crucial part in keeping people of color out of the top spots.

He could not be in attendance due to "family commitments."

Right in front of Prince William and Kate Middleton, she continued: "He says that he is going to name this [award] Harry - because he is really excited about bringing it back to the States with him." Robbie winces straight after and explains, "those are his words, not mine!" Thankfully, everyone laughed.

And being the humble man that he is, he always uses his speech to lift others. At the last SAG awards, he commended everyone else nominated, outlining the reasons why each of them deserved it more than him. You can find the full speech if you keep scrolling.

He called-out the all-white nominations for the major awards, explaining how people like him benefit from people of color, and subsequently, he was praised highly for his attempt to raise awareness about a prominent issue that has been lingering around the industry for far too long.

"I have not done everything in my power to ensure that the sets I was on are inclusive. But I think it's more than just having sets that are multi-cultural. We have to do really the hard work to truly understand systemic racism. I think it is the obligation of the people that have created and perpetuate and benefit from a system of oppression to be the ones that dismantle it. So that's on us."

Celebrities of color commended the actor for his effort to raise awareness.

And so did Kerry Washington.

She referred to his speech as "facts."

Writer and critic, Hanna Ines Flint had some advice for him.

I am really interested to see what Joaquin Phoenix's next projects are and how he will put his words into action.
— Hanna Ines Flint (@Hanna Ines Flint)1580721661.0

She wanted to see him "put those words into action."

One for Original Score and the other for Casting. Brownie points on the casting one because Phoenix was a hit.

Check out the full video of his speech right here. And if you want to know more about how he got on at the SAG awards, then keep reading to see the iconic speech he did there.