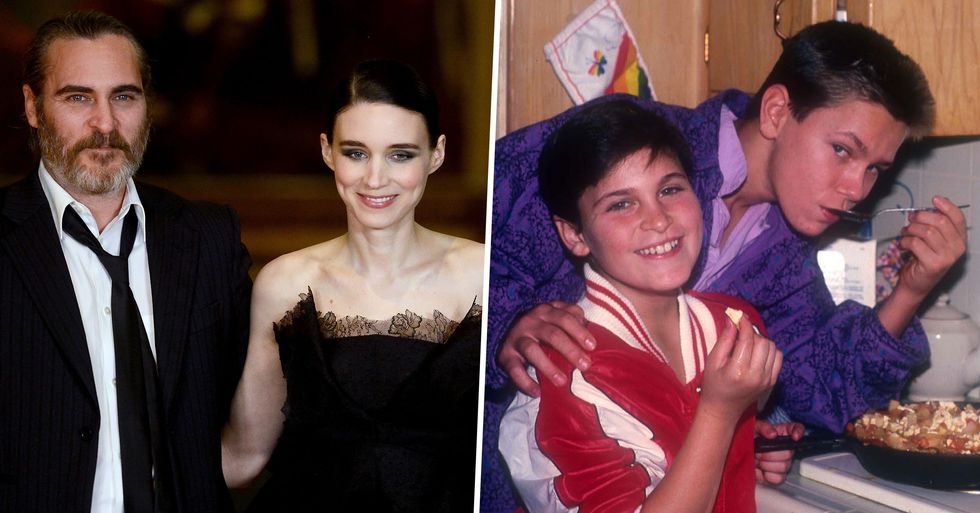 Joaquin Phoenix has been the whole talk of Hollywood over the last year for his leading role in Joker. His performance as troubled comedian Arthur Fleck has been praised globally, and his dedication and commitment to becoming the character have been strongly applauded.

But there is a lot more to the actor than what meets the eye. He opts to keep his personal life as guarded as possible, but a slip of the tongue has revealed some information about Pheonix's new child with actress Rooney Mara and it's extremely heartwarming...

Joaquin Phoenix and Rooney Mara are one of Hollywood's cutest couples.

Though the A-Listers like to keep their private life very private, recently they've hit the headlines after it was revealed that Mara was pregnant with the couple's first child.

And on September 27th, it was reported she had the baby...

After keeping the entire thing a secret for 9 months, the couple officially had the baby and have already given him a name that they hold close to their hearts.

Phoenix hardly ever does "emotional", but it's time to remove the makeup...

If you didn't know, Joaquin Phoenix has been known for the past year as The Joker, but there's a lot more about the actor than what we certainly expected.

Joaquin's late eldest brother, who died in 1993, once claimed to have lost his virginity aged 4, although the Joker star is adamant that his parents didn’t know about the inside goings-on of the cult.

But 1993 saw Joaquin's twenty-three-year-old brother perform at Los Angeles' infamous The Viper Room, part-owned by Johnny Depp. Joaquin and his sister Rain attended the gig, but they were unaware that their brother had consumed a drink that was a cocktail of illegal drugs.

In the early hours, he suffered an overdose, and collapsed outside on the street, where he convulsed for over 5 minutes before he died. While Rain desperately tried resuscitating him, Joaquin made a frantic 911 call – which was later released to the media.

Joaquin has rarely spoken about this tragic event...

Nearly twenty-seven years on from the tragic death, Joaquin has opened up in a rare interview with Anderson Cooper for 60 Minutes.

During the revealing interview, Joaquin and his family talk about the impact that River's death had on them.

During the program, the Joker star admitted that the media's presence had a huge impact on his grieving process.

"We were so removed from the entertainment world. We didn't watch entertainment shows. We didn't have the entertainment magazines in our house," Joaquin told Cooper.  "You know, River was a really substantial actor and movie star and we didn't really know it." "During that time in which you're most vulnerable, there are helicopters flying over, there are people that are trying to sneak onto your land. "Certainly, for me, it felt like it impeded on the mourning process."

It's clearly something Joaquin struggles with to this very day.

At the time, it took him 2 years to return to Hollywood, the trauma of losing his brother in such horrific circumstances clearly still has a huge effect on him. During the program, the family admitted that even more than 2 decades on, grief can reemerge unexpectedly.

Joaquin's mother opened up about this further:

"The grieving process happens out of nowhere," she explained. "Ya know, I'll be driving and all of a sudden I will feel it. And I'll just welcome it."

Joaquin says he still feels his brother's presence in his life.

"I feel like in virtually every movie that I made, there was a connection to River in some way. "And I think that we've all felt his presence and guidance in our lives in numerous ways."

And that has never been truer as Phoenix and his finance, Rooney Mara, name their first child after his late brother.

Though the couple hasn't officially come out to make the announcement, filmmaker Viktor Kossakovsky let the news slip at the Zurich Film Festival.

Kossakovsky and Phoenix are both executive producers on Gunda.

But when Phoenix didn't turn up to the festival, the filmmaker revealed the well-hidden secret as an excuse for his absence in a video that you can watch at the end of this article.

"He just got a baby, by the way, his name was… a beautiful son called River, so he cannot promote it [the film] now," Metro reported.

And the news went down really well with fans who were touched by the heartwarming tribute...

Here's the full clip of the slip-of-the-tongue announcement:

Congratulations to Joaquin Phoenix and Rooney Mara, we're so happy for the couple! If you want to see who else has recently made an announcement that they will be having a child, keep scrolling...