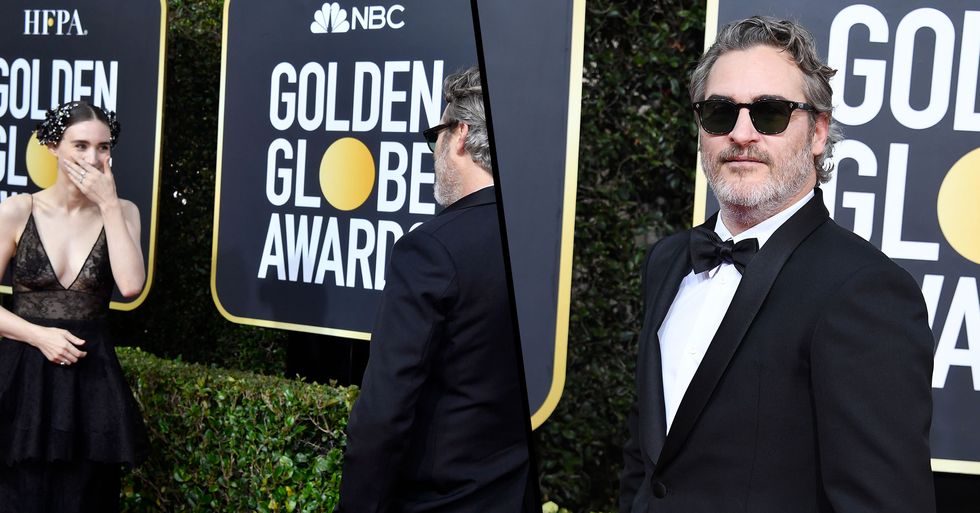 Sunday night saw the premiere of 2020's Golden Globe awards, where the British reigned supreme yet again. Our favorite actors from across the pond swept up some major wins but the rest of the world managed to pull it back.

One of the most hotly anticipated stars of the night was Joaquin Phoenix and he certainly didn't disappoint. But everyone couldn't help but notice that he walked the red carpet alone. Keep scrolling to find out the heartwarming reason why...

There was another movie that was in the spotlight during the evening...

... Joker. After a hugely successful stint at the box office and near-unanimous praise, fans had high hopes for the flick.

And it didn't disappoint...

The movie scooped 2 awards, despite missing out on the big prize of Best Movie.

It was a good night for Joaquin Phoenix.

The man behind the Joker himself bagged the award for "Best Performance by an Actor in a Motion Picture."

The actor beat the likes of Christian Bale and Adam Driver.

But it seems his head-turning acceptance speech has people divided.

Some were less than impressed with his acceptance speech.

It was certainly a head-turner.

Others praised his speech.

I'm sorry if you find Joaquin Phoenix speech awkward but he pointed out hypocrisy, not doing enough and taking priv… https://t.co/W8Mayphtde
— Kenny✨ (@Kenny✨)1578283422.0

At one point, he thanked the HFPA for serving a vegan dinner during the evening.

His speech got bleeped multiple times due to swearing. "To my fellow nominees, we all know there's no (bleep). It's like this thing that is created to sell advertisements for the TV show. I'm inspired by you. … Some of you I've reached out to personally. Some, uh, I'm still a little too intimidated by, even though we share the same agent: Hi, Christian. You're not here, but uh …" he told the audience. He then briefly thanked his partner, Rooney Mara and apologized to Joker director, Todd Phillips, for being "such a pain in the ass."

"Contrary to popular belief, I don't want to rock the boat, but the boat (bleep)," he added. "It's really nice that so many people have come up and sent their well wishes to Australia, but we have to do more than that, right? …  It's great to vote, but sometimes we have to take that responsibility on ourselves and make changes and sacrifices in our own lives and hope that we can do that. We don't have to take private jets to Palm Springs for the awards sometimes or back, please."

But that wasn't the only thing that got people talking...

Fans were quick to notice that the actor walked the red carpet alone without his fiancee Rooney Mara.

And it turns out there's a pretty heartwarming reason for this.

The star stood away from Mara so he could get a better view of her. But when she realized what he was doing, she couldn't resist smirking.

The photographer captured the sweet moment between the pair.

They are absolute couple goals. So adorable.

Next up, could it be an Oscar for Joaquin Phoenix?