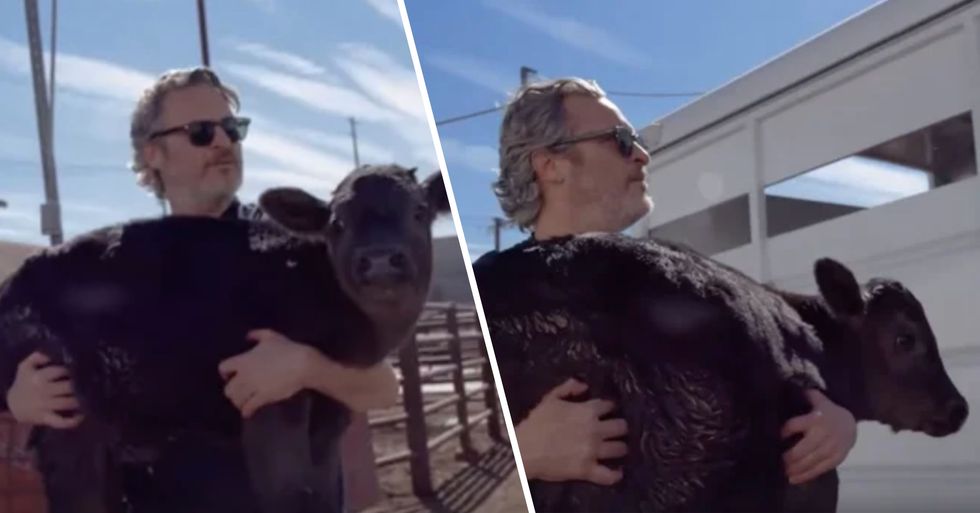 But his personal life has certainly been put under the microscope since his step into the limelight, and he hasn't made his vegan lifestyle a secret at all.

Keep scrolling to watch the video of Joaquin rescuing a cow and her calf just days after his Oscar's speech...

Some of the family members made some bold accusations...

Joaquin's late eldest brother, River, who died in 1993, once claimed to have lost his virginity aged 4, although the Joker star is adamant that his parents didn’t know about the inside goings-on of the cult.

And despite Joaquin's incredible success...

He has continued to passionately advocate the vegan lifestyle.

Joaquin won an Academy Award this year for Joker...

And in his acceptance speech, he decided to point his beliefs as a vegan. "We feel entitled to artificially inseminate a cow, and when she gives birth, we steal her baby,' he said. "Even though her cries of anguish are unmistakable. And then we take her milk that’s intended for her calf and we put it in our coffee and our cereal."

The actor was heavily praised for using this opportunity to speak about what he is passionate about...

And Joaquin also stressed the importance of making small changes that will not only save animals but will also save the planet.

And it turns out that just days after accepting his award...

Joaquin was out and about recusing cows and their babies.

The actor partnered up with LA Animal Save recently...

And together, the group visited the California slaughterhouse Manning Beef and chatted with the CEO, Anthony Di Maria.

Unlike many other vegan protestors...

Joaquin remained calm throughout the meeting and he patiently listened to what Anthony had to say about his business.

Though the pair did disagree on one thing...

They disagreed on if the term for the fate of the animals should be "harvested" or "murdered."

But Joaquin and Anthony seemed to have mutual respect for one another...

And Anthony had given his permission for Joaquin to rescue a cow and her baby.

Joaquin named the cow Liberty and her calf was named Indigo...

And the fortunate animals were transported to their new home at an animal preserve ran by the nonprofit organization Farm Sanctuary.

Joaquin later released a statement about his visit and his unlikely friendship...

"I never thought I’d find friendship in a slaughterhouse, but meeting Anthony and opening my heart to his, I realize we might have more in common than we do differences," he said. "Without his act of kindness, Liberty and her baby calf, Indigo, would have met a terrible demise."

It is truly refreshing to see 2 people of different beliefs form a friendship...

"My hope is, as we watch baby Indigo grow up with her mom Liberty at Farm Sanctuary, that we’ll always remember that friendships can emerge in the most unexpected places; and no matter our differences, kindness, and compassion should rule everything around us," he continued to say.

Joaquin also acknowledged the animal advocates he worked with to make this rescue possible...

"Although we will continue to fight for the liberation of all animals who suffer in these oppressive systems, we must take pause to acknowledge and celebrate the victories, and the people who helped achieve them," he said.

"Shaun Monson, Amy Jean Davis, and the entire LA Animal Save community have taken their pain of bearing witness and turned it into effective, diplomatic advocacy for the voiceless. As a result, Liberty and Indigo will never experience cruelty or the touch of a rough hand."

This is a perfect example of how to promote one's beliefs, one doesn't have to scream, shout, and resort to violence to get their point across... which is what too many activists around the world are currently doing.