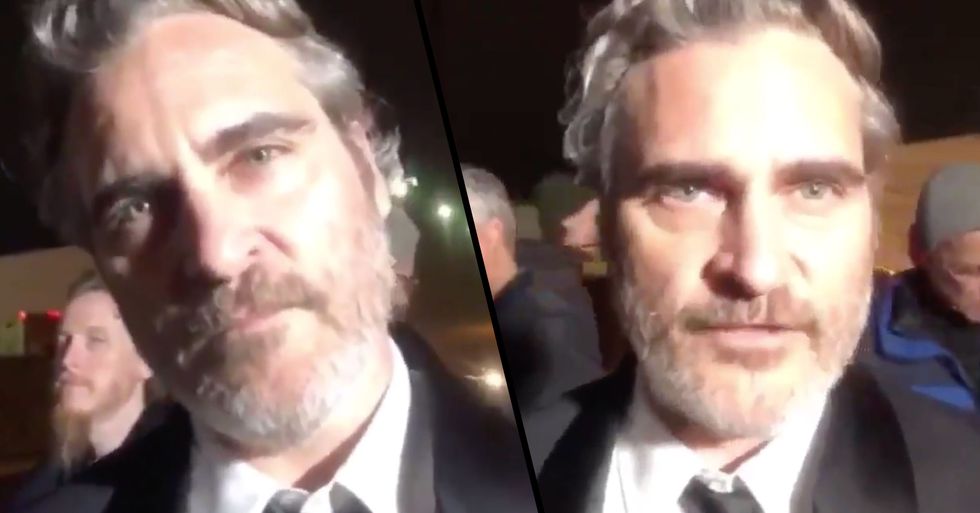 On Sunday night, the 26th Screen Actors Guild Awards took place in Los Angeles, California, celebrating some of the best of what the film industry has to offer. With a panel of 160,000 voting members, the ceremony is always one to watch as the results are hard to predict.

And of course, one of the highlights of the night for celebs is the after party... although one famous face skipped it out to head somewhere a little more unconventional, shall we say...

Keep scrolling for the pictures and the full clip.

But like we said before, anything could happen on the night.

We know we said that the SAG awards were hard to predict, but we were all sure that OUATIH was a shoo-in for that one.

But it was Joaquin Phoenix who truly stole the show.

Sunday night saw Joaquin Pheonix pick up yet another award for his soon-to-be-legendary role in 2019's Joker. It seems to have become a reoccurring theme for the actor, but hey, we're not complaining. Although he did something pretty unexpected after the show, keep scrolling to find out more...

"It’s infuriating. I wish you would. Just suck once," Phoenix almost begged him to turn in at least one terrible performance.

After his big win, Phoenix skipped out on celebrating at the after-party...

And instead, he went straight over to somewhere a little more unconventional.

The star was spotted at a slaughterhouse not long after bagging his SAG award.

Phoneix has been pretty vocal in the past about issues such as climate change and animal rights, but this time he's really got fans talking.

He also got the Golden Globes to roll out that controversial vegan menu.

The actor tends to keep a low profile in the Hollywood scene, instead choosing to focus on issues close to his heart.

At the scene on Sunday night, he opened up to press about why he came to the slaughterhouse immediately after hitting the awards show.

“Most people don’t really know of the torture and murder in the meat and dairy industry. I’ve seen it for what it is, so I have to be here," Phoenix explained to Jane Velez-Mitchell, according to a press release.  “We have moral obligations to talk about it and expose it for what it really is. We are so indoctrinated with these happy images of animals on farms, on the covers of meat containers, at restaurants, and it’s a lie. I think people need to know the truth and we have an obligation to do that." Keep scrolling for the full clip.

Joaquin Phoenix really went to a slaughterhouse vigil for pigs After SAG awards,, this is so wholesome and so saD a… https://t.co/QdtVlYiYCn
— 𝔫𝔢𝔰𝔰𝔞 (@𝔫𝔢𝔰𝔰𝔞)1579592605.0

The actor was spotted comforting pigs on their way to being killed. “Joaquin’s regular attendance at our vigils in L.A. has inspired activists both locally and globally," Amy Jean Davis, founder of L.A. Animal Save, explained. “We are so grateful for his voice. All over the world, activists are bearing witness to animals bound for slaughter and waking up the world to their plight."

He's clearly very passionate about the cause. Good on him! If you want to hear more about the SAG awards, then keep scrolling... Check out who absolutely stunned on the red carpet and who... could have done a little better.