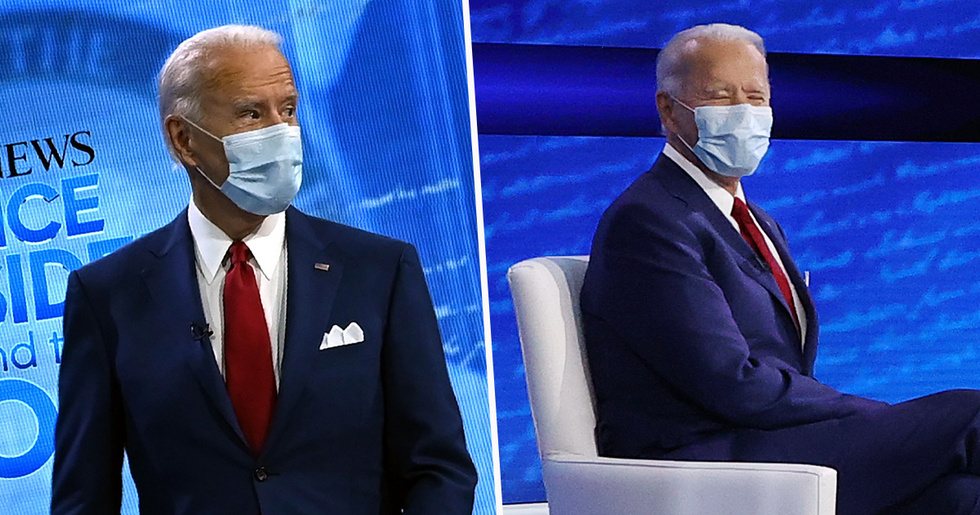 It seems that Donald Trump has some serious competition this year...

It's been an eventful evening, to say the least...

And both Donald Trump's and Joe Biden's town-hall forums have kicked off... at exactly the same time.

The President's forum in Miami has been heated and difficult...

But what about Biden's over in Philadelphia? Well, the Democratic candidate started by addressing something very important... and that's how he would have handled the pandemic differently to Trump.

But was hastily canceled over coronavirus fears following Trump's positive test earlier in the month.

But it was established almost instantly that things were going to be carried out in a slightly different way to the usual proceedings.

The Commission on Presidential Debates had previously said tonight's event would be held virtually...

With the candidates in separate locations.

Meanwhile, Joe Biden was putting together his own plan to appear in an ABC News town hall in Philadelphia...

Which is the very thing we watched this evening.

Understandably, this caused quite a lot of anger...

This is a bad result for American voters, who should not be forced to choose which to watch. So much is still going… https://t.co/tkzcxQX4nR
— Mark Lukasiewicz (@Mark Lukasiewicz)1602691151.0

And NBC has been criticized for agreeing to go ahead with Trump's forum which will force viewers to choose either one or the other to watch, rather than getting an equal share of both candidates.

So, tonight, we have been treated to 2 separate town hall events...

Just on different channels from different parts of the country, with undecided voters watching in the audience. Yep, I told you things had strayed slightly from the norm.

And while Trump's forum was heated from the get-go...

Biden took a slightly different approach over in Philadelphia.

The Democratic candidate was asked by ABC moderator George Stephanopoulus about how he would have handled the pandemic differently if he was in office...

And what he said blew Trump right out of the park.

Biden used his comparison to lambast Trump for his somewhat "uneven" response to the virus.

"He missed enormous opportunities and kept saying things that weren’t true," he said, noting that Trump’s administration said the virus would go away by Easter or be eradicated by the summer heat.

He explained how his first move would have been "sending Americans to China to get the most up to date knowledge on the virus."

The hopeful Democratic candidate then said there should have been more national standards earlier in the pandemic...

And that the President should be pushing all Americans to use masks as a way to stop the spread. "He didn’t talk about what needed to be done because he kept worrying, in my view, about the stock market... He worried if he talked about how bad this could be, unless we took these precautionary actions, then, in fact, the market would go down. And his barometer of the success of the economy is the market."

Can we argue with that?

Make sure to stay posted for upcoming updates.