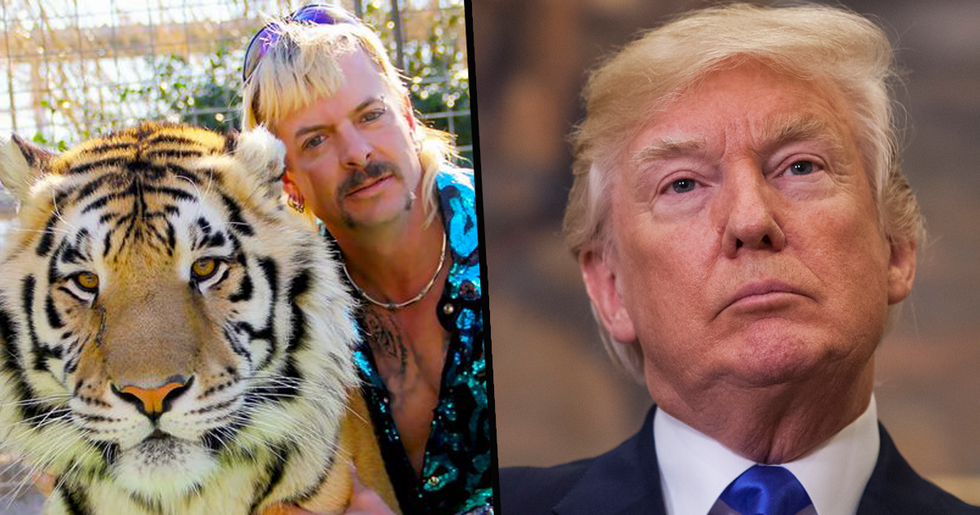 Joe Exotic could be one step closer to clawing his way out of prison after President Trump weighed in on his sentencing at a press conference a few weeks ago. But now that they have his attention, Exotic's legal team has pulled out all the big guns...

Keep scrolling to find out what they have done now... It may or may not include a giant, double-decker bus...

There's a Netflix show that no one can seem to stop talking about.

Joe was sentenced to twenty-two years in prison.

His first charge was for conspiracy to murder.

He allegedly hired a hitman to take Carole out whilst she was biking down a deserted bike path before the FBI became involved and thus foiled his dangerous plan.

And the second was for animal cruelty.

Though his treatment of his tigers has always been questionable, it was found that Joe had killed several of the older big cats to make room for new arrivals at his animal park.

Most of us believe that this sentencing is more than reasonable.

Despite how cooky he comes across as on camera, it's undeniable that Joe belongs behind bars for his appalling behavior to both his staff and his innocent animals.

But others aren't too convinced.

Evidently hoodwinked by his "loveable" on-screen persona, many people have been taking to Twitter to protest his sentencing.

The hashtag #freejoeexotic was even trending for a while.

I've lost all faith in humanity.

So many people are set on seeing Exotic walk free...

Simply because he makes good television.

But now, there's someone else who's revealed their questionable stance on the Joe Exotic situation...

And it is incredibly worrying, if not a little unsurprising.

Why doesn't this shock me at all?

He revealed his stance on the topic at a press conference a few weeks ago.

And it seems that he could even be looking into Joe's sentencing himself.

But, before the conference, he apparently had no idea who Joe Exotic was.

And, when a reporter brought up his son, Donald Trump Jr's comments on the show, the President replied: "I know nothing about it … he has twenty-two for what? What did he do?"

And, after the reporter explained why Joe had landed himself behind bars...

The President asked, “Do you think he didn’t do it? Are you on his side? Are you recommending a pardon?"

He emplored the rest of the room about whether Joe should be pardoned or not...

Before saying: "As a reporter, you're not allowed to do that [give an opinion], you'd be criticized." He then confirmed, "I'll take a look. Is that Joe Exotic? That's Joe Exotic."

But now that Exotic's legal team has the President's attention, they are milking it for all its worth...

In a video directly addressed to Trump, Exotic has resorted to begging (yes, literally begging) for his release.

One of the main attractions of the campaign included a bus...

But not just any bus, a double-decker one with the not-so-inventive-slogan: "President Trump please pardon Joe Exotic, Team Tiger".

Yeah, that should definitely do the trick!

And they've even gone one step further, coming up with a whole new conspiracy theory that states Joe Exotic has been framed for something he didn't do. Yikes.

If you thought this world couldn't get any crazier, there you go, ladies and gentlemen:

If you want to see some Tiger King related memes, then just keep scrolling, we got you.