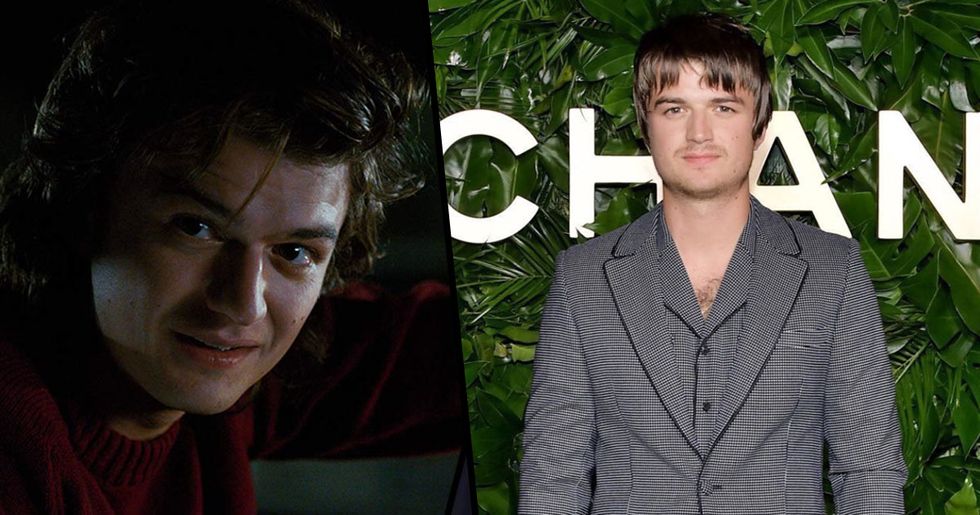 There are many reasons for the huge success of Netflix's Stranger Things. But one which can't be denied is the attention to detail of the characters' costumes. The sense that we really are in a 1980s small-town lends the fantastical sci-fi an element of reality that's essential to us suspending our disbelief when it comes to the upside-down. And one essential element of this? The characters' hair.

But while taking a break between filming for the show's fourth season, actor, Joe Keery, who plays beloved jock, Steve Harrington, took a deviation from his usual look. He switched out his signature '80s mullet for a shorter look with some particularly controversial bangs - and the internet wasn't too pleased.

Luckily for Steve stans, though, it seems the look was just a temporary change, as the latest images of the actor suggest his hair is heading back to normal. Phew.

The show begins with the disappearance of a young boy in a small Indiana town - but as his friends hunt for him, things quickly start to become more complicated than ever imagined.

Including some pretty terrifying elements.

While the show is, in many ways, kind of heartwarming and funny, it's also filled with terrifying monsters and incredibly sad situations.

That said, there's another huge reason for the show's popularity.

The setting of the show in 1980s small-town America gives it a really fun aesthetic feel - and for many viewers, is comfortingly nostalgic.

And since the show's beginnings ...

There has been one character who was an absolute fan-favorite. Loveable jock, Steve Harrington, began series one as something of a fool but has grown in popularity over the show's three seasons.

And aside from his sweet personality, there's another reason for Steve's popularity.

His incredibly authentic, 1980s style mullet has long been a huge part of the Stranger Things landscape - and, for many, it's an essential part of the viewing experience.

In fact, Joe Keery, who plays Steve, has been asked about his hair before.

When interviewed by Esquire in 2017, Keery said, "Well, the cut's good. And if the haircut is good, that's half the job. It's just a blow-dry with stuff in the back. Sarah Hindsgaul, who is the head of hair, is totally killer. She's the best."

"I think they've actually discontinued [Farrah Fawcett's Fabergé Organics]. You can probably find it on eBay or something. Prices will probably jack up in the next week or two. Or maybe Netflix will reissue it."

And it's clear that the hard work paid off.

Because Steve Harrington's hair has garnered a legion of its very own fans outside of those who care about Steve himself.

And people have noticed one thing in particular.

Steve Harrington is absorbing all the energy from getting his ass kicked and storing it in his hair for an emergenc… https://t.co/NEHeMbRnf7
— NX (@NX)1566842467.0

As the series has gone on, and Steve's character has developed, his hair has grown larger and more powerful.

if you pay close attention you can actually see Steve's hair growing in every episode https://t.co/ThdSPj61ca
— Matias Hannecke (@Matias Hannecke)1509385647.0

There's absolutely no way that Steve (or Stranger Things generally) would be the same without his signature '80s hairdo.

And even more impressive?

Actor, Joe Keery, has kept up his larger than life hairstyle in real life, too - here seen at the GQ Men of the Year Gala in 2018 with Maika Monroe.

While he sometimes goes for a more subtle look ...

It's never too far from the slicked back, lightly quiffed, voluminous look that made his character famous.

And if Keery does experiment ...

Then it's with another aspect of his appearance - like this slightly oddball mustache that he sported at the Salvatore Ferragamo Dinner Party on February 23, 2019.

And though some didn't love it ...

It's nothing compared to Keery's latest makeover. Because it seemed the star has cut off Harrington's infamous locks - and the internet was not pleased.

At the Chanel Dinner to celebrate the launch of their newest beauty line, Keery stepped out looking basically unrecognizable.

That's the problem with haircuts, right? Once you make an error, it takes time to get things back on track.

Some made some rather unflattering comparisons.

It takes a pretty strong person (or kitten) to pull off a bowl cut, after all.

In fact, looking at famous bowl cuts in history ...

Keery could hardly be described as being in good company. This side by side is a little too close for comfort.

Many had one overriding emotion.

Fear.  It's hard not to imagine this creepy figure standing over you in a nightmare, right?

But there were other feelings out there online.

Some are feeling more angry than anything else. Seeing what eye-candy we've lost does raise our heckles slightly.

Many noticed something odd.

Keery debuted his new haircut on September 12th - meaning many of woke up on Friday the 13th with one very frightening image to confront us.

It combined perfectly with other memes.

Who created this monstrosity - and even more importantly: why??

So, for Steve Harrington stans ...

It was a very hard time for everyone who was a fan of the mullet, and we hope they took adequate time to grieve.

As Joe Keery cut off his beautiful long hair, it's almost like he removed himself further from Steve Harrington - and now Steve only exists on our Netflix screens.

And what's worse, there didn't seem to be a helpful outlet for their feelings. The only way to feel better? To vent on social media, of course!

Because this haircut wasn't just bad.

It was so bad that it almost looks like a mistake. In fact, Keery's sheepish facial expression seems to lend even more to this theory.

But there was something strange.

The change in hairdo didn't just change the way Keery's hair looks. It seemed to have altered his entire face.

Sure, this haircut made Joe Keery look less like Steve Harrington. But it did make him look way more like a different Stranger Things character.

But at least we had some answers.

for all those who’ve been wondering “is joe keery actually hot or is it just the hair?” well. we have our answer now.
— pickle jughead (@pickle jughead)1568410602.0

If you weren't sure if the reason we'd all collectively fallen for Steve was his hair... well, at least we know.

For a while, it looked as though we'd have to get used to the new Keery.

And many posted tributes to that famous mullet quiff we had loved and lost.

Because fans noticed Keery out and about - and his hair was (almost) back to normal.

The quiff is back, baby!

And although it's a little smaller and less mighty than it once was, it's far, far better than that bowl cut we thought we were stuck with.

As one (excited) Twitter user put it, "JOE KEERY NATION WE NEVER LOOOOOSEEEEEE."

We can only hope his fair continues to be restored to its former glory.

But if you thought there was no one out there who could get away with a bowl cut, you'd be surprised. Keep scrolling to find out more.