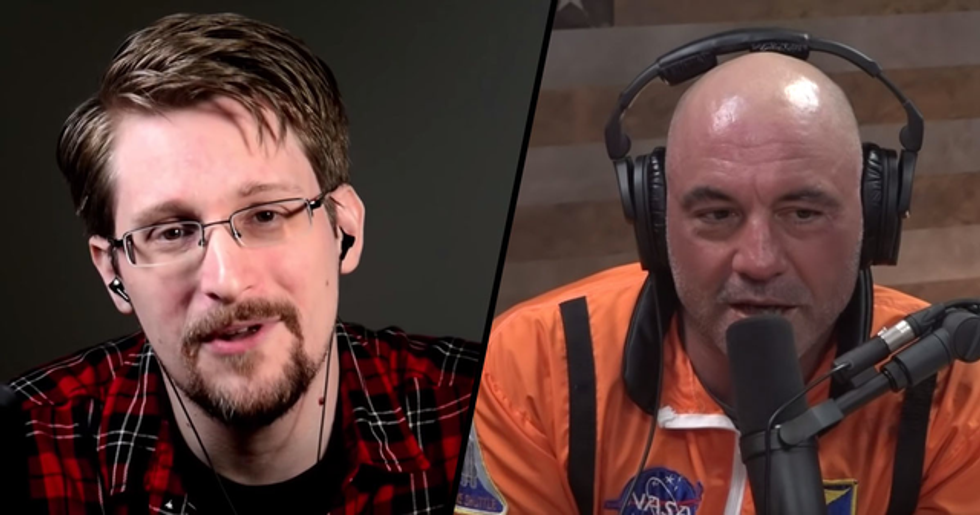 Joe Rogan's Interview with Edward Snowden Had All of Twitter Talking

Joe Rogan is known for landing some of the most amazing podcast guests on his incredibly popular show, The Joe Rogan Experience. But his most recent might be his best yet. This week's episode contains an incredible interview with infamous whistleblower Edward Snowden, and it's just as epic as you'd expect.

And needless to say, the internet has gone wild for what seems like the ultimate online crossover. Here are the very best of Twitter's reactions to the amazing interview.

Though he initially started as a stand-up comedian, Rogan found his fame from becoming an MMA interviewer and commentator and went on to win the World MMA Awards' Personality of the Year, 6 times.

But this week's guest may be Rogan's best yet.

He landed the incredibly famous whistleblower Edward Snowden for his podcast interview. And seeing these two interact seems to be what the whole internet has been waiting for.

He copied information from the National Security Agency that basically proved the government is watching our every move. But you didn't hear it from us.

Rogan is a massive proponent of being skeptical of everything.

This meant that Rogan and Snowden are essentially an interview match made in heaven - and the internet was understandably excited about it.

Many wanted to drop anything.

Hey, it's not every day (or any day, in fact) that we get exclusive Edward Snowden content.

Like, how had Rogan managed to get Snowden to agree to this?

It is pretty impressive.

Rogan is really proving that there's seemingly no one he can't get on as a Joe Rogan Experience guest.

Snowden hasn't been heard from in a while.

Which is what made his appearance on Rogan's podcast all the more surprising - and exciting.

While others pointed this out...

It seems almost everyone out there is angling for a spot on Rogan's podcast - but it's clear he's not here to mess around.

Joe Rogan and Edward Snowden are basically two of the biggest figures online. Seeing them in one place was basically the most internetty thing ever.

But some made this joke.

Those who follow Edward Snowden don't tend to be the same kind of people who listen to the Joe Rogan podcasts - leading to some pretty funny scenarios to be imagined.

And it seems the Rogan audience was receptive.

With many learning for the first time that our technology has the potential to hurt us.

The irony wasn't lost on some.

We have to listen to Joe Rogan using our technology - even though it's telling us not to trust technology.

And some aren't taking any chances.

After listening, one fan shared a video of him unplugging his (no longer trustworthy) Alexa.

However, there was a serious side to the interview.

It was as jarring as you'd expect from Snowden - with many pointing out quite how scary what Snowden was saying actually was.

Some think it should be compulsory listening.

I think @joerogan interview with @Snowden is one of the most important interviews of our time. Everyone needs to li… https://t.co/7EYjQiB8MA
— Layne Norton, PhD (@Layne Norton, PhD)1571863736.0

Even if you don't totally believe everything Snowden says, it's well worth trying to expand your mind a little, and think deeper about our technological habits.

Some made this simple point.

In terms of contributions to media this year, he's set a high bar, that's for sure.

Although there have also been many, many jokes.

Want to hear another incredible Joe Rogan interview? Keep scrolling to hear about his behind the scenes look at Area 51.
20%