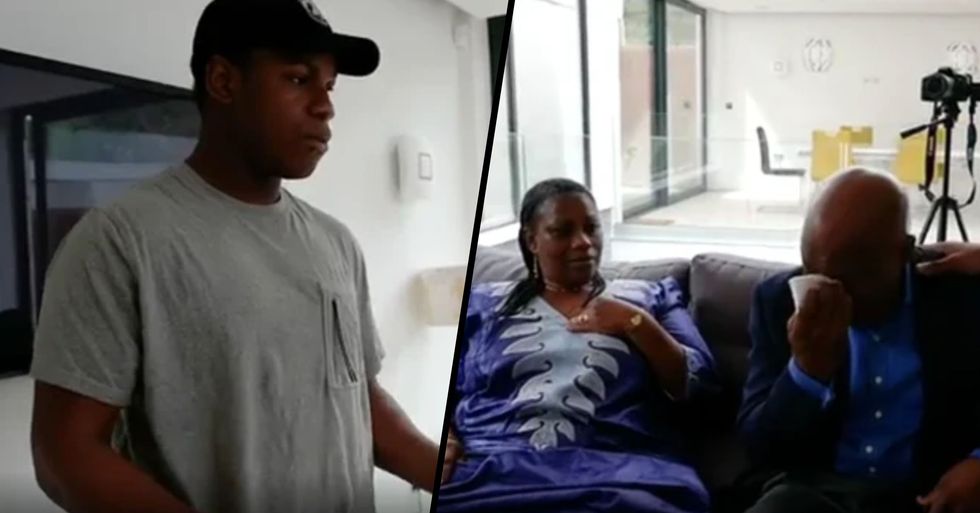 We always think of what we'd do if we made it big... buy ourselves a flash new car? Jet off on a lavish vacation? Or settle down in a jaw-dropping mansion? There's no doubt we'd treat ourselves... but what about our family?

Well, Star Wars actor, John Boyega surprised his parents with a house and has just shared the heartwarming footage of their reaction to finding out the news.

John Boyega had an early start to acting.

While acting in a play at school at aged just 9, he was scouted by Teresa Early, the artistic director of Theatre Peckham, a learning theatre for young people who live in South London.

But of course, theatres are expensive...

So, Boyega obtained financial aid from a "hardship fund," and enrolled in the theatre.

And it paid off, to say the least.

Boyega attended the theatre outside of school hours and took part in various school productions, before training at the Identity School of Acting in Hackney, London.

His father, a preacher, had initially wanted his son to also become a preacher...

But was supportive of Boyega's choice of pursuing acting instead.

Starring as Moses in Attack the Block. It wasn't a bad start for the up and coming actor, with the movie managing earn itself an impressive ninety percent rating on the infamously harsh Rotten Tomatoes.

But his big break came in 2014 for his role in an iconic franchise.

In April 2014, it was confirmed that Boyega had been cast as Finn, a stormtrooper for the First Order in Star Wars: The Force Awakens.

It was a game-changing moment for his career.

And when the flick hit screens in December 2015, Boyega's performance received critical acclaim from both fans and critics.

The star has become a familiar face of the franchise.

The Rise of Skywalker hit screens in December and marked the end of the decades-long tale.

Which, of course, means that Boyega has ventured off into other avenues.

Making what he's achieved all the more amazing.

He's even set up his own production company...

In 2016, the twenty-seven-year-old founded Upperroom Entertainment Limited. Shortly after the launch, the actor announced that his company would be co-producing the sequel to 2013's Pacific Rim, titled Pacific Rim: Uprising.

But it's not just his acting that's been keeping him occupied...

The star has been working on a way to give back to his parents, Samson and Abigail.

If we'd made it big, there's no doubt that we'd treat our parents too.

So, he secretly bought them a property.

And filmed their emotional reaction to being surprised with the grand gesture. Keep scrolling to watch the heartwarming clip.

The Star Wars actor shared the clip to Instagram on Monday.

During the video, which was actually filmed a few years ago, his parents can be seen sitting on the sofa with no clue what they are about to be surprised with.

Boyega then explains that he didn't bring them to the house for an interview...

"On behalf of myself I'd like to say thank you for everything that you've done and I decided to do a secret project for a few months, and I'm here to tell you that there was no interview, that was a lie, this is your house that I am presenting to you, this is your new house, it belongs to you," he says.

But, once the news sunk in, the heartwarming moment became a real tear-jerker.

He then goes on to thank his parents for all they've done.

"It's your prayers that has got this. Because the skill and the ability that I have received has been from your prayers ... Honestly from the bottom of my heart, thank you so so much for everything you have done."

His father got particularly emotional during the big reveal.

"Moments like these make all the hard work worth it," Boyega wrote alongside the emotional video.

This is so sweet. After watching Rise of Skywalker, fans are saying that it completely copied another well-known movie. Keep scrolling to find out more...