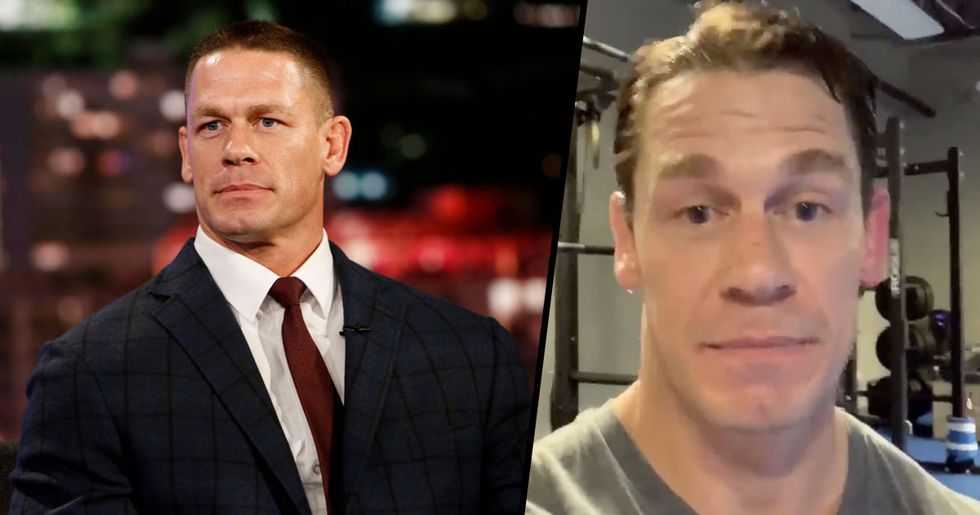 The state of California has been engulfed in flames. Wildfires are sweeping the area, as the residents prepare to face a blackout. First responders are on the scene and are doing their best to tackle the blaze, but as the rage of the fire increases, it seems to be getting extremely difficult to keep control.

John Cena, one of the world's biggest superstars, has done his bit to aid those out on the front line and has also urged other big companies, such as Paramount, to do the same thing.

Keep scrolling to see exactly what he said in a bid to raise more awareness about the issue.

California has been engulfed in flames.

Wildfires are spreading quickly through the state, destroying anything in its path including people's homes.

Many residents have been forced to flee their homes.

Due to the intensity of the blaze, now named the Getty Fire, emergency services have issued warnings statewide, stressing the dangers of the situation.

It has now reached LA and continues to spread.

In Los Angeles, the Getty Fire has destroyed over six-hundred acres of land and continues to destroy homes. At least 8 homes have been burned to the ground, while a further 5 have been damaged.

"They had to make some tough decisions on which houses they were able to protect," he said.

He also mentioned that the fire was overwhelming for firefighters.

"Many times it depends on where the ember lands. I saw homes, that were adjacent to homes that were totally destroyed, without any damage." Schools in northern California have been shut and warnings issued.

However, on Tuesday, things seemed to get worse.

With winds reaching approximately eighty miles an hour over the past two days, it is believed that they have aided the beastly fire in engulfing land at a quicker rate. Due to this reason, over 180,000 residents have been told to flee the area.

How was such a devastating blaze caused?

Reports have claimed that the Getty Fire was started due to a branch that fell onto some powerlines.

Pacific Gas & Electric (PG&E) has decided to shut off the power supply.

In order to get the blaze under control, the company has said the shut-offs on Tuesday are a precaution as high winds are forecast.

Over 1.5 million residents in California are set to be affected by the power outage.

This company has a history of causing ghastly fires due to the carelessness of their electric lines. They have previously found themselves in a position where they've had to file for bankruptcy.

After taking over parts of LA, people are worried about how far this is going to go.

Thousands of residents near the wealthy Brentwood neighborhood have been told to evacuate because of safety precautions.

He said: "Man these LA aren’t no joke. Had to emergency evacuate my house and I’ve been driving around with my family trying to get rooms. No luck so far!"

"We evacuated safely at 3:30 this morning. If you are in an evacuation zone, don’t screw around. Get out. Right now I am grateful for the best firefighters in the world, the true action heroes who charge into the danger to protect their fellow Californians. #GettyFire."

The firefighters on the front line are working hard to tackle the blaze.

Over 1,100 emergency service personnel have been deployed on the mission to get the fire under control and hopefully eradicate it before it causes more destruction.

However, this is easier said than done.

It has been reported that only fifteen percent of the fire has actually been contained. Weather experts have claimed that winds are going to continue fanning the flames, which will only add more pressure to the people trying to regain control.

After hearing this news, one of the world's biggest superstars has given his take on the issue.

John Cena, a wrestler who also dabbles in the film industry, decided he was going to release a video talking about how we must provide as much aid to emergency services, during this testing period.

The forty-two-year-old actor recently announced he was starring in Playing With Fire.

This film "showcases a group of people I believe are heroes: First responders," which seems like the perfect fit for a situation like this one.

In the video he says:

"Right now, California is in dire straits. It is burning. It is under siege from massive wildfires statewide, which means that our first responders are working around the clock and they need our help."

He claimed that he "came up with an answer" saying "I want Paramount to do me one favor. I want them to pick a charity. Pick a charity that aids our first responders as soon as possible."

"On behalf of Playing with Fire, and out of respect to the people who I truly believe are heroes, my response will be to immediately donate half a million dollars to this cause. In times like this, when people are giving their lives, and working around the clock, what they need from us is resource," Cena added.

"This is the right thing to do, and I’m doing my part to help the cause."

I’m asking that today on #FirstRespondersDay we do everything we can to help those who risk their lives to protect… https://t.co/To0rqaHuTT
— John Cena (@John Cena)1572306529.0

John Cena has been involved in a lot of charity work throughout his career and continues to do his best to try and help the world. Now, he is urging all of us, including massive companies, to help out.

And people are rallying behind him, as they should!

People have reposted some of his most inspiring quotes.

Others have referred to him as a "hero."

Who said heroes only exist in movies?

This user said: "he's so inspiring."

We need more people like John in this world!

As emergency services continue to tackle the blaze, let's take a moment to think and pray for those who have been affected by the Getty Fire and other wildfires in the area. Stay strong, California.