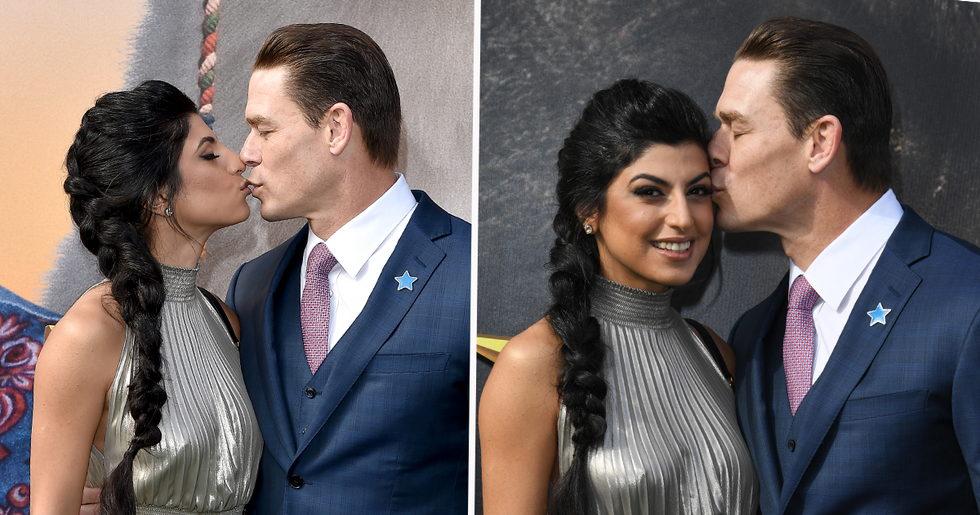 It seems as though John Cena his girlfriend, Shay Shariatzadeh have tied the knot in a secret ceremony.

Read on for all the little details...

John Cena is a monster athlete.

Cena is best known as an in-ring wrestling competitor contracted to the WWE.
Born on April 23rd, 1977, in West Newbury, Massachusetts, the professional wrestler quickly made a name for himself in the squared-circle because of his strength and determination to be the best at the sport.

Fast forward almost twenty years, and he is the biggest name in the sport.

After winning multiple championship belts and breaking many-a-record, the wrestling mogul knew he had cemented his legacy in the ring as a competitor.

He also found his feet in other parts of the entertainment industry.

Venturing out into other branches of entertainment, he managed to secure himself in acting roles. You may have seen him in The Marine (2006) and Playing With Fire (2019). He is also set to be making an appearance in this year's Fast and Furious.

And who could ever forget about his album?

That's right, he's even ticked that off his list. You Can't See Me took the world by storm when it was released in 2005, and even managed to crawl up the charts, peaking at number fifteen.

Currently, he is trying his hand at being a TV personality.

From interviews to day-time show appearances, Cena is currently our promoting his work, switching out his jean shorts and sweatbands for a slick suit and tie.

But there's one other aspect in his life that has always been in the limelight.

Aside from his career, his personal life has always been of interest to his fans, as well as to the public.

We first heard John Cena was off the market back in 2009 when he tied the knot with his first wife.

Elizabeth Huberdeau was married to the athlete until 2012 when they decided to divorce.

According to the reports at the time, things became messy.

There were cheating rumors and the couple also had complications when it came to splitting up assets and property. Overall, she ended up getting massive cash alimony from him post-divorce.

That's why, when he started dating former WWE Superstar, Nikki Bella, he stepped into it cautiously.

Though they started seeing each other only months after he had filed for divorce from his former wife, they took things in their relationship very slowly.

And Cena even delved into why he felt like this would be the right choice for him.

During episodes of Total Divas which saw intimate parts of their relationship, there were often times when Bella would be left in tears at Cena's reluctance to give her what she needed, despite her telling him that these things were really important to her.

And yes, this included marriage and children.

And ultimately, this became the reason why the power couple were forced to break up in 2018, after 6 years of compromises.

Nikki Bella told Maria Menounos in an interview that she didn't want him to have any "regrets" with her.

Cena has always been vocal about not wanting children, and at forty-three-years-old, he has stood by that decision, but he also said he didn't want to get married again and then proposed to Bella...

Yeah, she had to wait years but it was a step in the right direction for them both.

But soon after, she realized that the only dream she had left was to be a mother, and with Cena, that was not going to be possible. "Even in the end when he was willing to give me kids, I could just tell it's not what we wanted. And that's really, like, you know, what pushed me in the end, was like, if I'm going to force someone to be a father," Bella explained. "I'll never forget, I think it was my life coach, he goes, 'What if he looks at you down the road and just regrets everything, and then you have this child and you've built this life? Is that what you want?' And I remember thinking, that's not what I want. I don't want to force someone to change."

The toll it had on their relationship was immense...

And the pair officially called it quits in July 2018.

A few months after they broke up, Cena talked about how he still loved her.

But he was happy that she had found someone that made her happy. Nikki Bella made it official with her Dancing With The Stars dance partner Artem Chigvintsev and the two welcomed a baby boy together in July.

Cena is also in a committed relationship with Shay Shariatzadeh.

The pair have been dating for over a year now after getting together back in January 2019.

And it seems as though they are madly in love as the two have officially tied the knot.

Though Cena has not made the announcement yet, LADbible reported that they have seen official documents to say that they had wed earlier this week during an intimate ceremony in Florida.

And though this is a happy occasion, Nikki Bella fans aren't too impressed...

John Cena got married to keep up with Nikki. Because there’s definitely a real life storyline on how she glowed up… https://t.co/5uofOJcM7M
— Riley Freeman (@Riley Freeman)1602719033.0

Why y'all on John Cena head for getting married? Nikki Bella is happy he's happy are y'all that miserable?
— ✭✭𝕯𝖀𝕮𝕰-𝕯𝖀𝕮𝕰✭✭ (@✭✭𝕯𝖀𝕮𝕰-𝕯𝖀𝕮𝕰✭✭)1602723520.0

We're just glad they're both happy and living their best lives.

Congratulations to John Cena and Shay Shariatzadeh! If you're interested in seeing how Nikki Bella and her man Artem are getting on with a new baby, then keep scrolling...