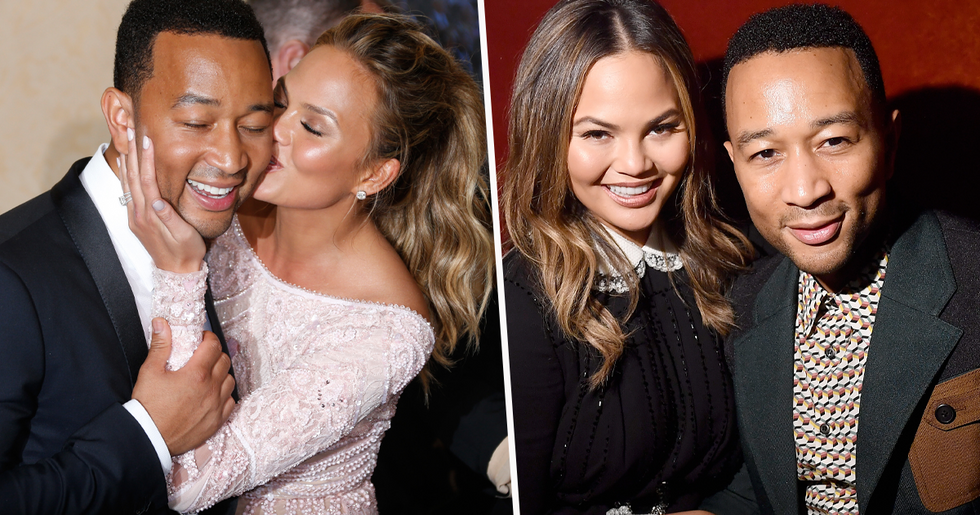 John Legend revealed that he has cheated during a revealing interview this week, and of course Chrissy Teigen had something to say about it...

John Legend got pretty candid during a recent interview.

And it seems he made a rather big confession.

“We get to the Maldives and he had planned this beautiful Christmas. He knows how much I love Christmas…And this waiter comes out with a silver dome for dessert…So he opens up the dome and a ton of arugula falls out and then I kind of fish in it…And I see the little box and then you know, your heart stops and you get so excited," Teigen explained.

It was everything she'd hoped for.

“There was no big grand speech or anything. I think it was just very lovely and sweet."

But they (legally) got married in an NYC courthouse, a day before traveling to Italy. "We actually got married after going to a couple of Fashion Week shows at Vera Wang, ironically who actually did my dress, but we got married at the courthouse right after," Teigen explained to E! News.

“We are dumb and didn’t realize that our Italian wedding would not be recognized unless we had a real ceremony in New York City. So Irina Shayk was our witness - the most beautiful woman on earth!"

The 2 are a pivotal part of the celebrity scene and their fans lap it up (especially where Teigen's relatable social media posts are concerned... let's be honest, she's comedy gold.)

The YouTube video, which runs for a whopping twenty-five minutes, sees the couple answer a number of home truths about their relationship while hooked up to a polygraph machine.

From prenups to crushes...

They well and truly dished the dirt - making for a rather entertaining spectacle.

And don't even get us started on when she shared this "heartfelt" post dedicated to her husband.

Or what about when she trolled Legend for his "sexiest man alive" win last year?

"My secret is out. I have fulfilled my dream of having boned @people's sexiest man alive!! an honor!!!!!" She seemed particularly thrilled about the announcement.

But this week, her hubby guest starred on Dax Shepard's Armchair Expert podcast.

And let's just say, he got extremely honest about his private life.

Well, one specific part of his private life.

Legend confessed that he has had a history of cheating.

"I think yes, I did have a history [of cheating], especially in my 20s," the singer admitted.

He couldn't resist all the attention he was getting.

"I think what happened for me personally is, you go through a lot of your life, like your teens, and I was like the 'two years younger kid than everybody' in high school and college, and so I just didn’t get a lot of girls when I was younger. And when I started to get that attention, I loved it -- just ate it up."

He described. himself as "dishonest and selfish."

"Part of it, I escaped technically cheating by kind of keeping my relationship ill-defined. But it was really cheating. You can try to get off on technicalities...I was dishonest and selfish and just enjoyed this new attention I was getting."

However, Legend became a changed man after meeting Teigen.

"And at a certain point, I just decided that that person was Chrissy and I...just decided I wasn't going to mess with anybody else anymore."

Of course, Teigen couldn't help but chime in...

Delivering her typical dose of wit on Twitter, the star quipped: "'Especially'??" she wrote, quoting his interview.

It wouldn't be right without a hilarious Teigen clap back, would it?

For more on the pair, scroll on to find out why Chrissy Teigen is worried for her family after some horrifying accusations have emerged...