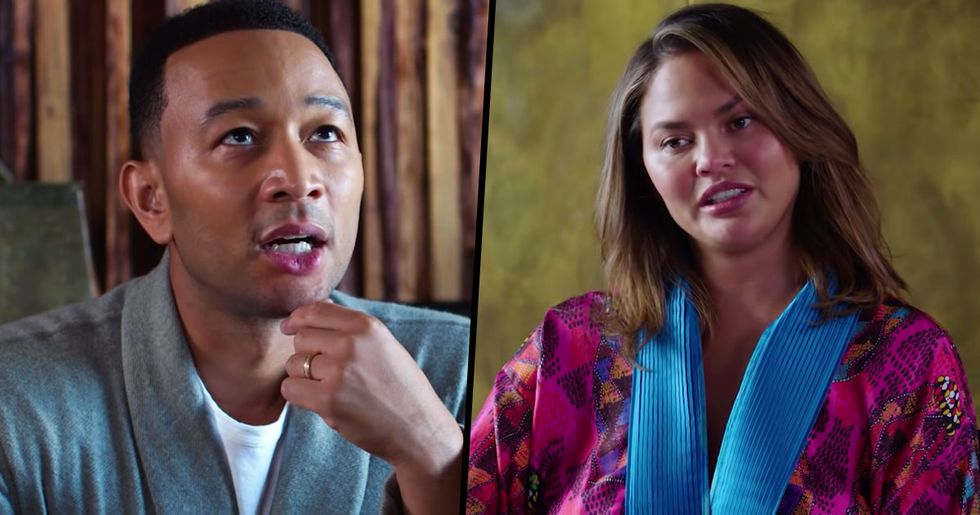 So, to put their relationship to the test, the pair took part in the infamous Vanity Fair lie detector test this week to uncover some home truths about each other. As you'd expect, their stint on the popular YouTube series has proved to be somewhat legendary and very funny - reinforcing exactly why so many fans can't get enough of the power couple.

From prenups to who else they find attractive, the couple truly didn't hold back. Keep scrolling to see the highlights from the drama-filled video.

But it wasn't long before Teigen joined her beau on tour. Although the pair had a mini-break up during this time... that lasted a day. “I was on tour with him and he’d gotten sick," Teigen revealed to Cosmopolitan. “He was feeling really bummed and stressed out. He was like, ‘I can’t be in a relationship right now.’ That lasted for one day. Literally, a day. I knew it came from a place other than us not working."

But they (legally) got married in an NYC courthouse, a day before traveling to Italy. "We actually got married after going to a couple of Fashion Week shows at Vera Wang, ironically who actually did my dress, but we got married at the courthouse right after," Teigen explained to E! News. “We are dumb and didn’t realize that our Italian wedding would not be recognized unless we had a real ceremony in New York City. So Irina Shayk was our witness—the most beautiful woman on earth!"

This week, they took part in the infamous Vanity Fair lie detector test.

Teigen was the first to take to the hot seat.

And Legend certainly didn't hold back - at one point asking if she still found other men attractive.

... and in true Teigen style, she answered brutally honestly.

In response, Teigen admitted that yes, of course she still finds other guys attractive. Legend then pulled out pictures of celebrities to get his wife’s take on their attractiveness. Love it.

Legend also quizzed his wife on his music.

Including if there were any songs she didn't like. The answer? Um, yes! Teigen confessed to disliking "Green Light" - breaking out into a full-blown rant about the track.

When it was Teigen's turn to grill Legend, things well and truly got turned up a notch.

At one point she candidly asks: "At this moment right now though, are you concerned that we don’t have enough sex?"

And Legend's answer is well, rather TMI, to say the least.

“No, especially after last night. Wow, TMI, everybody. I’m sorry," the singer joked.

Things took a more serious turn when prenups got a mention...

Teigen fired the question of whether John would have married her without a prenup. “Um, I think prenups are a good thing to do. I actually wish I knew you were gonna be so successful, I would have rewritten the prenup a little bit. You’re a lot richer than I thought you’d be," the "All of Me" hitmaker said. “If you take one of my monies, I will kill you," Teigen replied.

Teigen fully went in on her beau - grilling him about her weight.

"Are you waiting on me to lose this baby weight?" Teigen asked. “No, you look perfect," Legend replied. The lie detector test then showed that he was telling the truth.

Pretty much no stone was left unturned. It's not just their marriage that the couple are honest with fans about - the pair, in particular, Chrissy, frequently open up to fans about the realities of parenthood - including the fact that Teigen gets "owned" by her daughter when it comes to meals. Keep scrolling to find out more about their relatable parenting struggle.