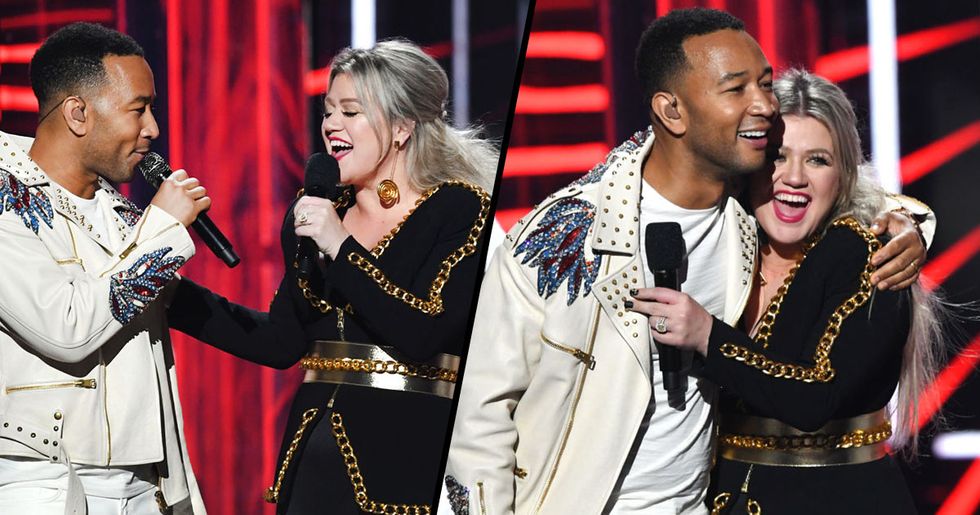 The holiday season is almost upon us. Yes, it might be two months away, but you can never be too festive, right? And what better way to get in the mood than blasting a few Christmas classics on the way to work?

Everything from "Last Christmas" all the way to "Jingle Bell Rock", my playlist has been sorted. But here's a new one for you all. John Legend and Kelly Clarkson have given us all an early gift with their modern take on the Christmas classic that is "Baby, It's Cold Outside." With the news breaking that this song might actually be about date rape - big yikes- the two singers have decided to switch it up so it's not promoting such a problematic concept with a catchy tune.

With concepts such as the #MeToo movement being prevalent in society...

We don't expect to let things slip anymore. According to RAINN, an American is sexually assaulted every ninety-eight seconds. If that sounds like a lot, it's because it is.

This is why Tarana Burke started a social media movement ten years ago.

The Brooklyn-based activist works as the program director for Girls for Gender Equity, an organization dedicated to empowering women of color. Burke talks about listening to a young girl's story of sexual assault on the organization's website, and how her reaction to it inspired her to encourage victims to speak out together to promote mass healing.

The concept really took off when celebrity Alyssa Milano tweeted about it.

The Charmed actress shared the suggestion that any woman who had been sexually harassed or assaulted should tweet "Me too" in response, to show the magnitude of this problem.

And she herself took part.

Announcing you've been harassed or assaulted isn't easy, but the star's willingness to open up about being a victim set the stage for others to come forward. Some of the participants were very surprising.

Anna Paquin also tweeted "me too" in response.

The star of True Blood and X-Men won the Academy Award for Best Supporting Actress at age 11, making her the second-youngest person to ever win the honor. But apparently she too has a been a victim of assault or harassment.

Adding to the chorus of household names admitting they'd been victimized, the Will & Grace star retweeted Milano's tweet with her own admission. And as the numbers of highly visible participants grew as other victims became emboldened to speak out.

This movement isn't just aimed at women, though they were the ones that needed the platform. Proving gender offers no protection from being victimized, Javier Muñoz, the well-known Broadway actor came out as a survivor. He even noted he'd been through it multiple times.

Some even went into more detail and it was horrifying.

One user shared a terrifying story from childhood that made us rethink the schoolyard — it isn't always a safe place. And showed that these abuses can happen at any time, anywhere.

@Alyssa_Milano The boys barely got a slap on the wrist but I was socially ostracized because I "couldn't take a joke."
— JustCate (@JustCate)1508099370.0

Even when the victim is a child, our desire to just brush things under the carpet can leave victims feeling insignificant or alone. It can even lead their communities to turn their backs on them. Shining light on this is exactly why "me too" was so powerful.

And this was just the first step.

It’s beyond a hashtag. It’s the start of a larger conversation and a movement for radical community healing. Join us. #metoo
— Tarana (@Tarana)1508109721.0

Burke announced that this isn't simply a day to join a hashtag; it's the beginning of a conversation about why sexual assault and harassment is so common. It's also a call for victims and communities to start the healing process. Thanks to activists like Burke, and the victims who have shared their stories, this movement has become part of our society.

This is why it is important to start weeding out the little aspects of our society that uphold these problematic values.

Even if that means having to edit classic Christmas songs.

I know what you're thinking: "Those damn Millenials are at it again!"

Why can't we just leave Christmas songs alone? I know, Susan, I know, but we can't. Imagine you're unintentionally teaching your kids that date rape is okay? Or it's a normal concept in our society so in the future they are aware that this is something they can do if they want to?

We can't have that.

This is why it is important to teach newer generations healthy lessons so problematic ones can't manifest themselves within them.

And unfortunately, that starts with some Christmas songs!

You all know the classic that is "Baby, It's Cold Outside," right? Of course, you do! I hate to break it to you, but we're starting with that one.

The "sweet" tune might actually be more sinister than we thought...

Here's why. When Frank Loesser and his team were writing this, I bet they weren't thinking about the connotations of their lyrics, were they? There are some things that you can get away with, but this ain't one of them.

This song, which was released in 1944, tells the story of "flirty banter" between a man and a woman.

In simple words, the woman is very drunk and wants to go home, but the man is insistent she stays with him for the night. Yikes. Change the bloody record.

However, here are the problematic parts:

At one point in the song, the lyrics read: Woman: “I really can’t stay." Man: “Oh baby, don’t hold out." From this line, his intentions are clear. It didn't matter if the woman was drunk or she wanted to go home, he was going to get what he wanted.

However, some journalists also point out that she may have wanted to stay...

But her desires would not have been accepted in society, so she has to "play hard to get" until he takes the game too far and becomes physical with her. Either one is a horrid connotation.

But it gets worse...

Though those lines are already quite unsettling, there are far worse lines in the piece such as the one where the woman is left questioning what it is in her drink.

This one's pretty obvious, isn't it?

Woman: “Say, what’s in this drink?" This line alone made threw this song right on the list of "banned songs" for radio stations up and down the country.

But John Legend and Kelly Clarkson knew just what to do.

Rather than just wiping the song out of civilization, they've decided they wanted to re-vamp it, so the #MeToo movement could be proud of the classic, yet again.

Here's a verse from the updated version:

Clarkson: “What will my friends think..." Legend: “I think they should rejoice." Clarkson: "...If I have one more drink?" Legend: “It’s your body and your choice."

I really can’t stay (baby it’s cold outside), I’ve gotta go away (I can call you a ride), This evening has been (so glad that you dropped in), So very nice (time spent with you in paradise), My mother will start to worry (I’ll call a car and tell ’em to hurry.)

Doesn't that sound much better?

No weird, creepy guys slipping anything into girls' drinks. No forcing a girl to stay. No girls stumbling around, seemingly desperate. Just two folks having a nice meeting, probably exchanging numbers afterward and arranging a cute date. Lovely.

The album which this song will feature on will be on repeat, I can guarantee you that.

A Legendary Christmas will be available on November 8th.