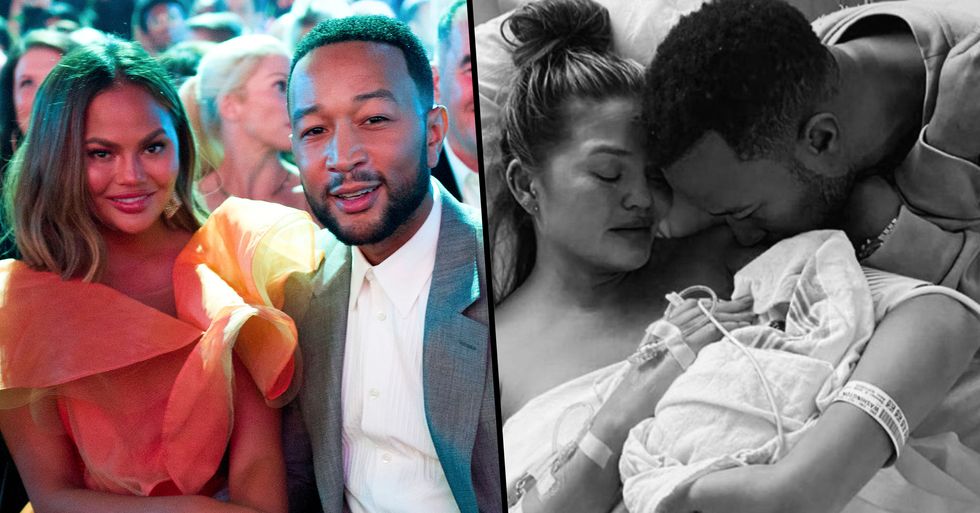 Following the death of their unborn child, Jack, John Legend has penned an emotional post dedicated to his wife...

The distraught mom made the emotional announcement a few weeks ago and it was utterly devastating to read.

And following the loss, the pair have been pretty silent on their social media while they grieve.

But, now, John Legend has broken his silence.

Chrissy Teigen and John Legend are Hollywood's sweethearts and long-standing idols in the parenting community.

After 4 years of dating, John was down on one knee...

"We get to the Maldives and he had planned this beautiful Christmas. He knows how much I love Christmas…And this waiter comes out with a silver dome for dessert…So he opens up the dome and a ton of arugula falls out and then I kind of fish in it…And I see the little box and then you know, your heart stops and you get so excited," Chrissy explained in an interview. "There was no big grand speech or anything. I think it was just very lovely and sweet."

When they announced they were expecting their third baby.

They made their exciting announcement a few months ago...

Via music video. The video was for John's new track, "Wild", and it showed the couple on a white linen bed on the beach.

Yep, the Legends were officially going to be a family of 5.

It was a beautiful video...

And clearly, the family was overjoyed at the prospect of a new arrival.

However, Chrissy faced a hard few months of the pregnancy.

Because we all know how tiring it is to be pregnant! But luckily for her, 4-year-old Luna was on hand to make life as easy as possible.

Luna took things to the next level when it came to looking after her mom.

Chrissy was placed on "super serious bed rest" due to a weak placenta and little Luna had been running around making sure her mom doesn't lift a finger.

The little girl had been running baths for her mom every day...

Reports came in recently that Chrissy had been hospitalized.

The star took to social media to update her worried fans.

"So, we all know I've been on bed rest for a few weeks. And that's like super serious bed rest, like get up to quickly pee and that's it. I would take baths twice a week, no showering. I was always, always bleeding... I'm about halfway through pregnancy and blood has been going for a month...maybe a little less than a month. But we're talking more than your period, girls, but definitely not spotting. A lot of people spot and it's usually fine. Mine was a lot."

Chrissy went on to urge doctors on social media to stop trying to diagnose her.

But it seems that all of these complications were a sign.

And it was announced shortly afterwards that Chrissy and John tragically lost their third unborn child.

Chrissy and John had already settled on a name for their little boy.

"We never decide on our babies’ names until the last possible moment after they’re born, just before we leave the hospital.  But we, for some reason, had started to call this little guy in my belly Jack.  So he will always be Jack to us.  Jack worked so hard to be a part of our little family, and he will be, forever."

She apologized to her son...

"To our Jack - I’m so sorry that the first few moments of your life were met with so many complications, that we couldn’t give you the home you needed to survive.  We will always love you. Thank you to everyone who has been sending us positive energy, thoughts and prayers.  We feel all of your love and truly appreciate you."

Chrissy then acknowledged the things that she and John are grateful for...

"We are so grateful for the life we have, for our wonderful babies Luna and Miles, for all the amazing things we’ve been able to experience.  But every day can’t be full of sunshine.  On this darkest of days, we will grieve, we will cry our eyes out. But we will "hug and love each other harder and get through it."

And just 2 weeks later, John Legend decided he still wanted to perform at the Billboard Awards...

He dedicated his heartbreaking version of Never Break to his wife, right after the host, Kelly Clarkson, sent her love to the pair.

Everyone that saw the performance was in pieces by the end.

And just one day later...

John took to Instagram to share a video of his emotional performance along with a heartfelt message for his wife.

"This is for Chrissy," he began.

"I love and cherish you and our family so much. We've experienced the highest highs and lowest lows together. Watching you carry our children has been so moving and humbling."

He went on to commend Chrissy for her strength in the face of grief.

"I'm in awe of the strength you've shown through the most challenging moments."

"What an awesome gift it is to be able to bring life into the world. We've experienced the miracle, the power and joy of this gift, and now we've deeply felt its inherent fragility."

"We promised each other this on our wedding day 7 years ago, and every challenge we've faced has made that promise more powerful, more resilient."

"Our love will remain. We will never break."

John went on to thank fans for all their support during this difficult time.

"Thank you to everyone who has been sending us prayers and well wishes, flowers, cards, words of comfort, and empathy. We feel and appreciate your love and support more than you know."

The star says he and Chrissy found comfort in knowing they aren't alone in this.

"More than anything, we've heard so many stories about how so many other families have experienced this pain, often suffering in silence. It's a club no one wants to be a part of, but it's comforting to know we're not alone. I'm sure Chrissy will have much more to say about this when she's ready. But just know we're grateful and we're sending love to all of you and your families."

RIP Baby Jack, our thoughts and prayers are with the family through this difficult period.