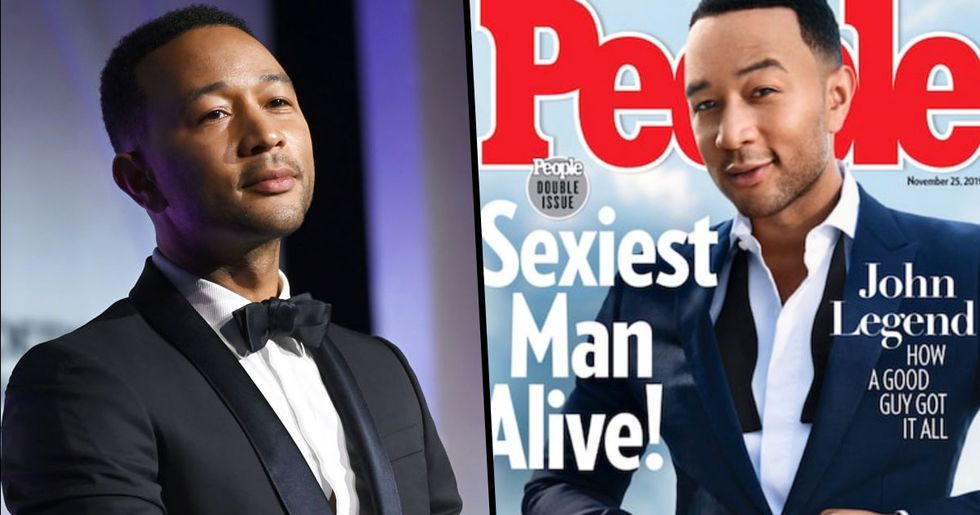 John Legend Has Been Named the 'Sexiest Man Alive'

It's that time of year where people magazine crowns their "sexiest man alive." The title has been awarded to the likes of Chris Hemsworth, David Beckham, Idris Elba, and Johnny Depp in the past and now the time has come to pass on the crown to another a-lister.

And it seems the lucky man is the singing sensation, John Legend. The announcement of his new title was made yesterday and it seems to be pretty proud of his achievement.

The star became an in-demand session musician while working with the likes of Alicia Keys, Twista, and Janet Jackson.

After being introduced to the then up-and-coming hip hop artist, Kayne West...

The pair collaborated on each other's demos.

The star released his debut album, Get Lifted, which heavily propelled him to musical stardom. The album was a huge success - earning platinum status, which was partly due to the hit single, "Ordinary People," which saw him bag 3 Grammys.

Since he's gone on to have hit after hit.

Hits such as "All of Me" have all been well-received in the charts.

But Legend also makes headlines for his relationship...

The star is married to model, Chrissy Teigen, and the pair have a huge public presence.

Yesterday, Legend was crowned as the sexiest man alive.

People magazine made the announcement on Twitter and he seemed pretty excited by the news.

He's joining the likes of David Beckham and Chris Hemsworth...

And now it looks like the crown had been passed on to Legend. "1995 John would be very perplexed to be following 2018 @IdrisElba as #SexiestManAlive. Hell, 2019 John is about as equally perplexed but thank you @People for finding me sexy. I'll take it."

It's an impressive title.

We're sure everyone, including Chrissy, is over the moon for him.