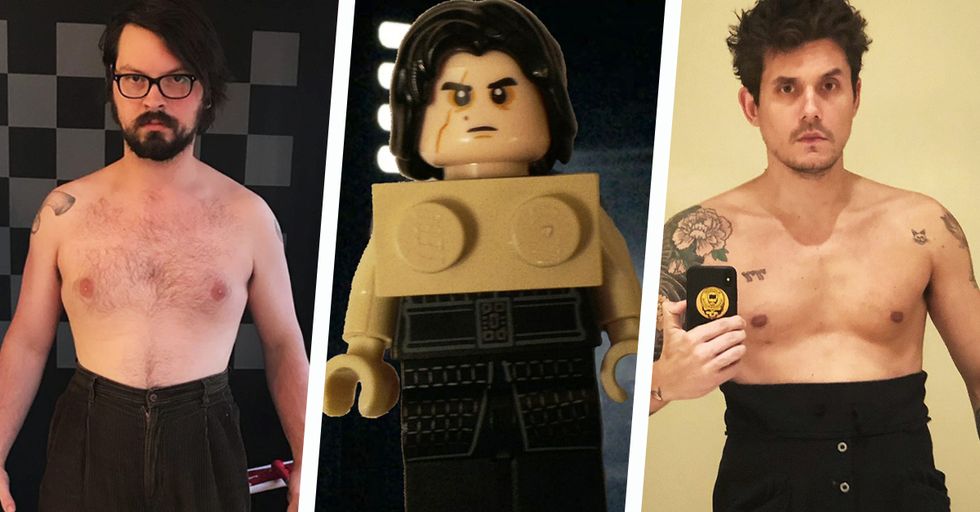 John Mayer Is Going Shirtless for the Hilarious and Hot #KyloRenChallenge

The Internet has a secret superpower. Aside from holding the collective knowledge of nearly all of humanity, it can turn just about anything into a meme. Beyoncé? She's a meme. The Pope? Also a meme. Sleepy interns? You guessed it. Meme.

Now, the Internet (with the help of John Mayer) has once again worked its magic and brought us all one of the best memes ever. They're calling it the #KyloRen challenge. But what exactly does it entail?

I've you've seen Star Wars: The Last Jedi, you know about this scene:

Throughout the film, Kylo Ren and Rey are inexplicably connected in a weird kind of Force-driven Skype call where they can see and hear each other even though they're in different parts of the galaxy. At one point, Kylo Ren is shirtless for one of these calls. The Internet has been kinda obsessed with that scene ever since the film came out.

Before long, the following video was posted:

It features someone (half) dressed as the shirtless Kylo Ren asking, "Who else enjoyed my shirtless scene in the movie?" (Look, we don't create the memes; we just cover 'em.) The video is accompanied by the hashtag #KyloRenChallenge. For a while, the hashtag went unused. But then John Mayer got ahold of it.

Get it? He's wearing high-waisted black pants and no shirt. Just like Kylo Ren in the movie! We're not sure whether it was Mayer's intention, but he quickly sparked a movement on social media.

Before long, everyone began sharing pictures of their own Kylo Ren-inspired looks.

If you think about it, this is definitely one of the easiest memes to participate in. All you need is a pair of black pants and a torso. (And a sick mustache, if you're this guy.)

If you really want to take your Kylo Ren cosplay up a notch, you're obviously going to need a lightsaber.

Do you think Adam Driver (who plays Kylo Ren) realized how iconic that scene was going to be when he first filmed it? We're guessing probably not. Of course, the fellas weren't the only people to participate in the #KyloRenChallenge...

Many women did, too!

Even some young Padawans got in on the #KyloRenChallenge action!

If your favorite character in the film was "all of the Porgs," the Internet has you covered:

Yep, even the loud, furry, bird-like creatures could participate in this challenge. That's how you know it's a good one. Somehow, they look even weirder wearing pants than the did without any clothing at all.

Think of the merchandising options!

Anyway, we're definitely fans of whatever is going on in this particular corner of the Internet.

As it turns out, this was the meme we were looking for. May the Force be with all those who choose to participate in it.