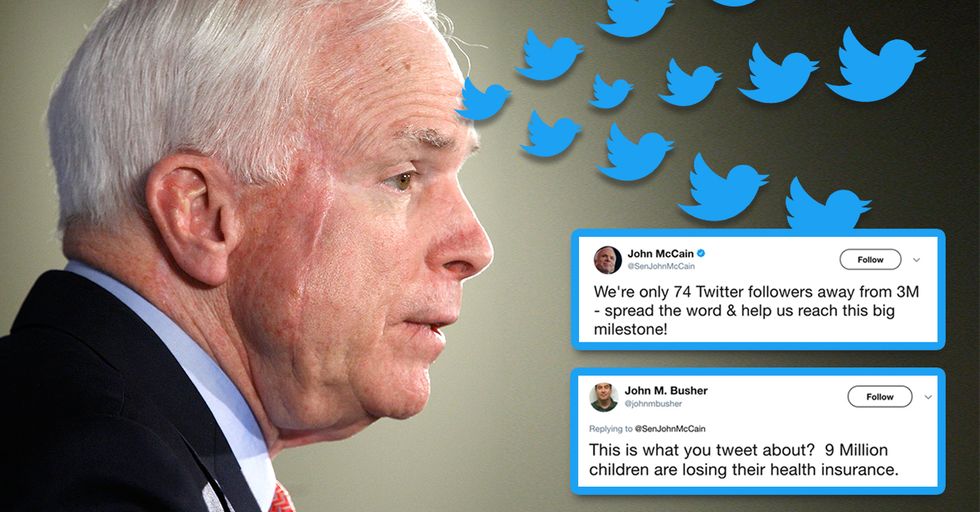 Republican Senator John McCain from Arizona has really led us on wild a rollercoaster ride of hating him, sort of liking him, and hating him again. It's almost impressive.

The 81-year-old Senator made headlines yesterday when, immediately after voting in favor of a pretty universally hated tax bill, he pleaded with Twitter for more followers.

It was maybe the finest modern example of someone not reading the room correctly, and it backfired on him spectacularly.

Let's take a journey, shall we, through the past few months with John McCain.

Way back in September, John McCain became a temporary hero of the left when he voted against the Graham-Cassidy bill. He was one of the key votes that ensured that the Affordable Care Act, also known as ObamaCare, would not be repealed.

It seemed like maybe John McCain had gone soft in his old age.

He's suffered from aggressive brain cancer for many months now, and it seemed as if John McCain finally understood what it was like to need healthcare, to need support. Maybe we'd turned a new leaf with John McCain.

But we were wrong!

He voted in favor of the GOP's tax bill just a few days ago, which was widely criticized for not only its tax cut for the rich and tax raise for millions of middle-class Americans but also for the rushed and secretive way the massive bill was pushed through.

The tax bill, which overwhelmingly helps the wealthy instead of the middle class, has several other disastrous consequences.

According to The New York Times, the bill "would also open up the Arctic National Wildlife Refuge in Alaska to oil and gas drilling." It's sort of like they were, "We're destroying the American middle-class family. Might as well just get rid of the Earth, too."

So mere days after voting to destroy the world, basically, John McCain thought it'd be a good idea to ask Twitter for more followers because he was this close to 3 million.

It wasn't the smartest move, to say the least. Read on to see how fantastically this effort backfired...

John McCain only needed 74 followers to hit 3 million, but following his vote for the disastrous tax bill, Twitter users weren't going to let that happen.

So, after helping pass the horrible #GOPTaxScam bill and voting to take away healthcare from millions of Americans,… https://t.co/iPdauKo54N
— Jon Cooper 🇺🇸 (@Jon Cooper 🇺🇸)1512411077.0

Jon Cooper, the Chairman of the Democratic Coalition, started the #UnfollowMcCain hashtag to counter McCain's quest for more followers.

And it totally worked.

Begging for followers is as classy as taking pennies from the poor to give to the rich and screwing with people’s h… https://t.co/4ac3U8Dxlj
— Orlando Michael (@Orlando Michael)1512411277.0

People began unfollowing McCain left and right as a response to his callous tax bill vote and his apparent disregard for the struggles of real human beings.

It was a beautiful thing to watch.

Within two hours of John McCain's initial plea, more than 5,000 people had unfollowed him. Sure, it's a tiny, symbolic move, but it's indicative of the way the American people feel betrayed by such a villainous hypocrite.

The #UnfollowMcCain train kept chugging along.

He lost thousands and thousands of followers in just a few hours. The American people, or at least the people of Twitter, weren't going to let McCain get away with abandoning his people with his votes — they were going to abandon him first.

As the campaign to unfollow John McCain picked up steam, it became more and more delicious.

McCain lost 20,000 followers before the day was through. As writer Eve Peyser said, it was really quite heartwarming. If the world is going to end, it might as well happen when John McCain hasn't reached 3 million followers.