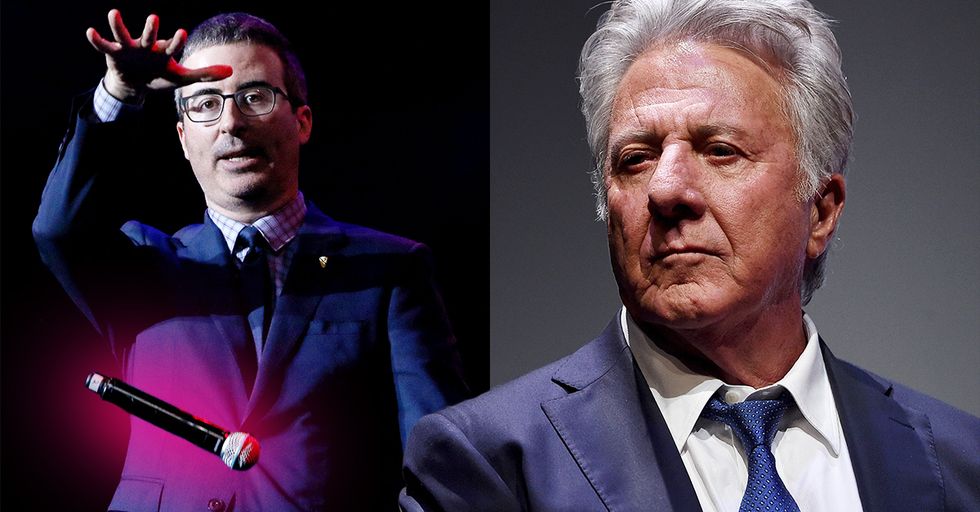 In the spring of 1985, 17-year-old Anna Graham Hunter was a senior in New York City looking for a way to get out of the last semester of her classes. So she took an internship on the set of the Death of a Salesman TV film, which starred Dustin Hoffman, Kate Reid, and Dustin Hoffman, among other notable actors. Hunter, a burgeoning writer, kept assiduous notes of her time on the film, which she sent in correspondence with her sister in London.

Hunter's time on Death of a Salesman was largely positive except for one thing... Dustin Hoffman, as she wrote in her diary, was a "pig."

Hoffman, who was around 48 at the time, continuously sexually harassed the 17-year-old intern, and, indeed, the other female intern on set.

Hunter wrote about her time with Hoffman in an explosive guest column in The Hollywood Reporter.

One morning I went to his dressing room to take his breakfast order; he looked at me and grinned, taking his time. Then he said, "I'll have a hard-boiled egg … and a soft-boiled clitoris." His entourage burst out laughing. I left, speechless. Then I went to the bathroom and cried.

Hunter says the harassment wasn't always that bad. In fact, she'd liked Hoffman at the beginning.

She'd been a fan of him ever since he acted in the film Tootsie, which saw him as a struggling actor who dons drag in order to get a role on a soap opera. But then, as the incidents piled up, her opinion of him changed – as did her opinion of the film industry. "Today, I realized some things about this business that scare me," she said. "First of all, Dustin's a lech. I'm completely disillusioned. After Tootsie, I thought I wanted to marry him."

At the end of her accounting, Hunter muses on what would have happened had her internship not been a "lark." What if she'd wanted to go into the film industry, what then?

This question is answered via the other woman who has accused Hoffman of harassment,  TV writer and playwright Wendy Riss Gatsiounis. In 1991, Gatsiounis was a struggling playwright working a temp job until Hoffman and his Tootsie screenwriter Murray Schisgal met with her, ostensibly to discuss turning her play “A Darker Purpose" into a film. The first thing Schisgal asked her was whether she had a boyfriend or husband. According to Gatsiounis, Hoffman interjected, saying, "Murray, shut up. Don’t you know you can’t talk to women that way anymore? Times are changing." The rest of the meeting seemed to go well, and Hoffman asked Gatsiounis to do a rewrite of the play's treatment to fit Hoffman, who was in his 50's at the time.

When Gatsiounis met with the pair again, however, the dynamic had changed.

Instead of discussing the rewrites, Hoffman asked Gatsiounis to go with him to a nearby hotel for "shopping," while Schisgal encouraged the off-key outing. As Gatsiounis  describes:

I go in, and this time it’s, like, Dustin Hoffman’s really different... He says, ‘Before you start, let me ask you one question, Wendy — have you ever been intimate with a man over 40?'... I’ll never forget — he moves back, he opens his arms, and he says, ‘It would be a whole new body to explore... I’m trying to go back to my pitch, and I’m trying to talk about my play. Then Dustin Hoffman gets up and he says he has to do some clothing shopping at a nearby hotel, and did I want to come along? He’s like, ‘Come on, come to this nearby hotel.'

When Gatsiounis declined this outing, that was that. Hoffman was no longer interested, and she spent the next few months beating herself up.

Dustin Hoffman apologized for both allegations. In a statement The Hollywood Reporter, he said, "I have the utmost respect for women and feel terrible that anything I might have done could have put her [Hunter] in an uncomfortable situation. I am sorry. It is not reflective of who I am."

This is backdrop that awaited Hoffman when he showed up Monday night for an anniversary screening of Wag the Dog, the 1997 black comedy classic in which he plays a crooked Hollywood producer who produces a fake war in Alabania to distract from a presidential scandal. The host of HBO's Last Week Tonight, John Oliver, was the moderator of the panel, and he didn't let the opportunity go to waste.

“This [Hunter's allegations] is something we’re going to have to talk about because … it’s hanging in the air," Oliver said to Hoffman in his firing shot.

"It’s hanging in the air?" Hoffman rebutted. "From a few things you’ve read, you’ve made an incredible assumption about me. You’ve made the case better than anyone else can. I’m guilty." Hoffman then went on to say that he didn't recall Hunter at all (because 17-year-old interns are so common in Hollywood) and that his interactions with people on set was just how people behaved between takes.

“I still don’t know who this woman is," Hoffman said. “I never met her; if I met her, it was in concert with other people."

Except that Hunter has pictures and mementos from her time on set with Hoffman, as well as multiple other people on set who verified her account – not to mention the diary she kept from that time.

Oliver, whose show Last Week Tonight has quickly become one of the most trusted sources of information particularly because of Oliver's ability to take humorous deep dives into seemingly boring subjects, has a reputation for not backing down from contentious issues... or interviewees. He demonstrated this ability with aplomb, next taking a crack at Hoffman's claims that the allegations, if they happened, were "not reflective" of him.

“It’s ‘not reflective of who I am’ — it’s that kind of response to this stuff that pisses me off," Oliver said. “It is reflective of who you were. If you’ve given no evidence to show it didn’t [happen] then there was a period of time for a while when you were a creeper around women. It feels like a cop-out to say ‘It wasn’t me.’ Do you understand how that feels like a dismissal?"

Hoffman again hemmed and hawed, saying he felt "blindsided" by the attack.

This led to the most testy part of the exchange.

“Do you believe this stuff you read?" Hoffman asked.

“Yes," Oliver replied. “Because there’s no point in [an accuser] lying."

“Well, there’s a point in her not bringing it up for 40 years," Hoffman said.

It's worth noting that Hoffman himself has admitted to sexually harassing both of his female costars from his seminal movie The Graduate Katherine Rose –  (love interest Elaine) and Anne Bancroft (Mrs. Robinson).

In interviews, Hoffman spoke fondly about his (unscripted) groping of Anne Bancroft's breasts in a scene and pinching Ross' buttocks, an act she did not appreciate, to say the least.

I remember at one point, I pinched very gently Katharine’s right—probably her right buttocks as a way to help loosen us up. And I kind of patted her and gave her a little [pinch] and she turned on me and later we became friends, but at that moment, she just whirled on me and said, [Hoffman adopts rough, angry voice] “Don’t you ever do that to me again." And suddenly everybody kind of heard it, the crew and wherever, and I just sat there and they didn’t know what was going on. She said, “How dare you?!" I said, “Sorry, sorry—[Hoffman laughs]—I was just trying to get us relaxed. [Interviewer and crew laughs in background.] Sorry." And if it was bad up to then, it was gonna get worse after.

She later apologized. She said it was her own tension, too.

This recounting is not out of character for Hoffman, who consistently excuses his acts of harassment as youthful folly and tries to lean on the feminist card he "earned" while making Tootsie.

In fact, he did so again during the exchange with Oliver.

I would not have made that movie [Tootsie] if I didn’t have an incredible respect for women." Hoffman said. "The theme of the movie is he became a better man by having been a woman." [Hoffman then] said he had an awakening of sorts when, dressed as a woman for that film, he was inored by some men on the set. “I said when I came home to my wife that I never realized men were that were brutal, that men are that obvious," Hoffman recounted. “They didn’t find me attractive and they just erased me."

Perhaps Hoffman should have taken a page from what he learned and not tried to erase the women he worked with by reducing them to their sexuality. As the talk continued, someone in the audience shouted, "Thank you for believing women," to John Oliver. Exactly.