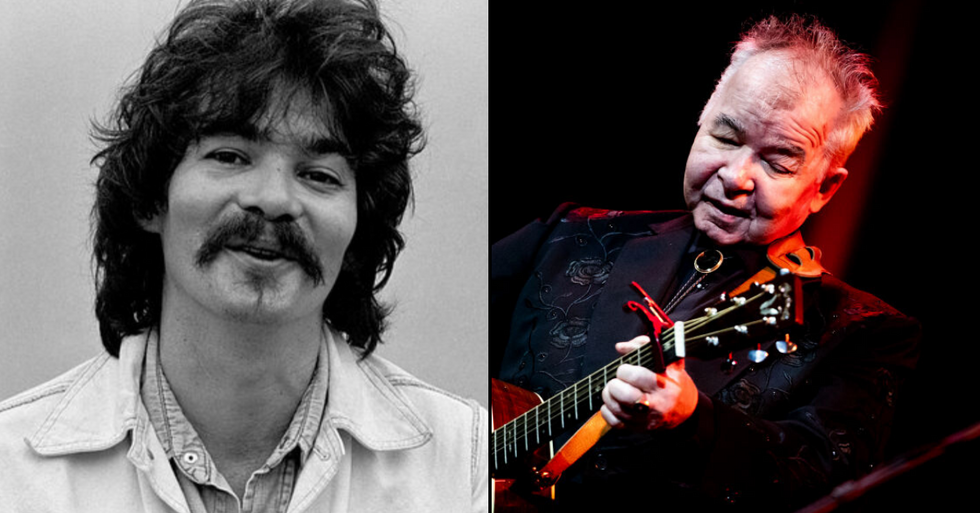 Tributes have been pouring in. Keep scrolling for the full story, including the incredible legacy he will leave behind.

John Prine was one of the most celebrated country artists of his generation.

Prine became a prominent figure in the Chicago folk music scene back in the late '60s.

It wasn't long before his hard work began to pay off.

His work caught the attention of, Kris Kristofferson, who helped him bag a recording contract.

While many of his tracks didn't fare too well on the charts...

His work gained huge recognition among his fellow performers; the Everly Brothers covered his song "Paradise," while both Bette Midler and Joan Baez performed renditions of "Hello in There," according to All Music.

His 1975 album, Common Sense did, however, reach the charts here in the States.

But, after he released his 1980 album, Storm Windows, Prine was dropped from his label.

Instead of letting the blow dampen his spirits...

With the help of his longtime manager, Al Bunetta, the star formed his own label, Oh Boy Records.

Under his own direction, his music well and truly took off.

He earnt Grammy nomination in the Contemporary Folk category for his 1986 album, German Afternoons, and went on to win the coveted Grammy 3 years later for his 1991 album, The Missing Years.

The Missing Years proved to be Prine's biggest commercial success.

The album featured a star-studded line-up of guest appearances including the likes of Bruce Springsteen, Bonnie Raitt, and Tom Petty, and went on to sell nearly 250,000 copies.

Like many singers, Prine wasn't afraid to make the crossover to acting.

The star made his movie debut in 1992's Falling from Grace.

But of course, he could never leave music behind.

In 1995, his album, Lost Dogs and Mixed Blessings earned him another Grammy nomination.

However, in 1998, while he was working on an album of country music duets...

Prine fell ill and was diagnosed with squamous cell carcinoma - cancer that formed on the right side of his neck.

A year later, after undergoing treatment, Prine was well enough to complete his album, In Spite of Ourselves.

More recently, in 2016, the star released a follow-up to this album titled For Better, or Worse. This time, the album featured duets from the likes of Kacey Musgraves, Alison Krauss, Miranda Lambert, and Susan Tedeschi.

And even got inducted into the Songwriters Hall of Fame in 2019.

However, last month, the star was hospitalized after suffering from symptoms of coronavirus.

Prine’s wife, Fiona Whelan Prine, had previously said on 19 March that she had tested positive for coronavirus and that the couple were quarantining separately.

The news of his devasting hospitalization was announced on his official Twitter page.

“This is hard news for us to share. But so many of you have loved and supported John over the years, we wanted to let you know, and give you the chance to send on more of that love and support now. And know that we love you, and John loves you."

After 2 more days in hospital, Prine's condition took a turn for the worst.

The star had been incubated and put on a ventilator.

Stars including Patton Oswalt, Bette Midler, and Kacey Musgraves took to Twitter after the news of his hospitalization surfaced.

Joan Baez even posted a cover as a tribute to Prine and his wife.

"This is breaking my heart it really is. F**k COVID-19 and anyone who takes it lightly," wrote another user.

And today, it has sadly been announced that the star has passed away.

The New York Times has reported that the star passed away at the Vanderbilt University Medical Center in Nashville Tuesday. He was seventy-three-years-old.

And many have been sharing their encounters with the star online.

Fans have been penning their own tributes.

I hope everyone can stop and listen to their favorite John Prine song right now. What an enormous loss. Sending love out there 😔
— olivia wilde (@olivia wilde)1586312764.0

"Every note and word that John Prine ever wrote found it's way to the sky where they now sparkle amongst the stars. You can feel the light of those songs in even the darkest of nights. It's one of so many gifts he gave that will last us forever. Eternally grateful."

He clearly inspired so many.

And many have been left heartbroken by his tragic death.

This is such devastating news.

"John Prine's music has been an integral part of my life. Whether his songs made me laugh or cry, his music has been with me through so many moments. There will never be another songwriter with an affinity for words like John. Thank you for every song, singing mailman #JohnPrine."

The GQ family is heartbroken to learn of the passing of the great and immortal John Prine. May he rest in peace. https://t.co/iYYxRA2kGr
— GQ Style (@GQ Style)1586313119.0

"The GQ family is heartbroken to learn of the passing of the great and immortal John Prine. May he rest in peace," they wrote.

This is a huge loss for the music world.