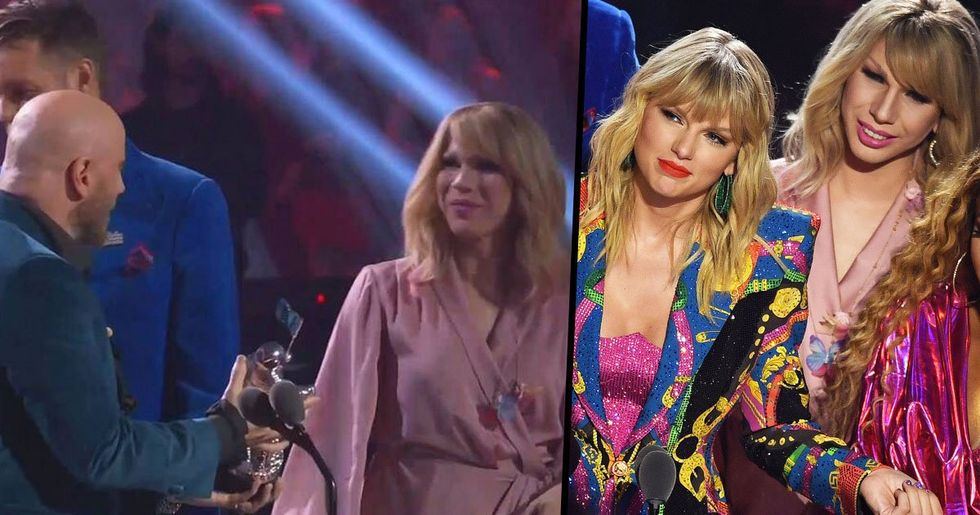 During the course of the evening, we watched some of the industry's biggest names bag some pretty huge awards as well as performances from several celebs, including Taylor Swift, Camila Cabello, and Lizzo.

And, of course, the show also played host to some pretty hilarious moments, including the moment in which John Travolta handed Taylor Swift's award to her drag queen lookalike... yikes.

The night also played host to some hilarious moments.

But this one was the weirdest of them all... and, of course, it just had to involve John Travolta, didn't it?

Travolta is known for messing up his lines.

Remember that time he managed to introduce Idina Menzel as Adele Dazeem during the 2014 Oscars and, to everyone's shock, he didn't even bother to correct himself. It's a name, Travolta, how hard could that be to memorize?

And, this year, he managed to make another awkward blunder.

He, alongside Queen Latifah, was set to present one of the biggest awards of the night: "Video of the Year."

Prior to actually announcing the winner, Travolta made a self-deprecating joke...

Just before they were set to call the winner's name, Travolta turned to look at Latifah saying: "I shouldn't do this! Because I'll just mispronounce sh*t and f*ck it up. You do it. You do it."

To be honest, he should have let her take the reigns on the entire thing.

It was all going well. Queen Latifah had it all under control, getting the crowd hyped up before announcing the winner.

When Taylor's name was called out, we half expected it.

She made a real statement with her comeback. After all the controversies surrounding the ownership of her music, we were glad to see that she came back with a bang.

However, she did have some stiff competition...

The category was filled with other star-studded names including Ariana Grande and the Jonas Brothers. And, out of all of the nominees, Taylor came out on top.

Her video for "You Need to Calm Down" featured many drag queens who also joined the singer on stage.

The video included many of pop culture's favorite queer faces, which obviously set the homophobes off. But who cares? Because she won a VMA for it and we loved it. And, obviously, the cast joined her on the big stage to accept the award, including the drag star who portrays T-Swift in "Drag Race" Season 5.

And that's when things got confusing for Travolta...

He had one job. Just to hand the award to Taylor. But, obviously, it's John Travolta, so he found a way to mess it up. He tried to hand the award over to the drag queen, Jade Jolie, confusing her for the real Taylor. Upon realizing that she wasn't the real Swift, he opted for a weird side-hug-thing instead...

Have a look for yourselves!

Many fans couldn't help but joke about the whole situation.

It was pretty funny, wasn't it?

The confusion on his face when Swift's lookalike wasn't taking the award from him was priceless.

This is just another iconic moment for TV.

Maybe not one of Travolta's best moments, but, hey, it'll go down in history with the rest of his blunders.

And many fans see it as another win for the LGBTQ+ community!

Did you hear that? And T-Swift's shutting down the haters and the homophobes by doing the thing she's best at: by winning multiple awards. Go, Queen!

Not been keeping up with Tay recently?

You're missing out! Keep scrolling to read about what went down with our fave country-turned-pop-princess and Scooter Braun.