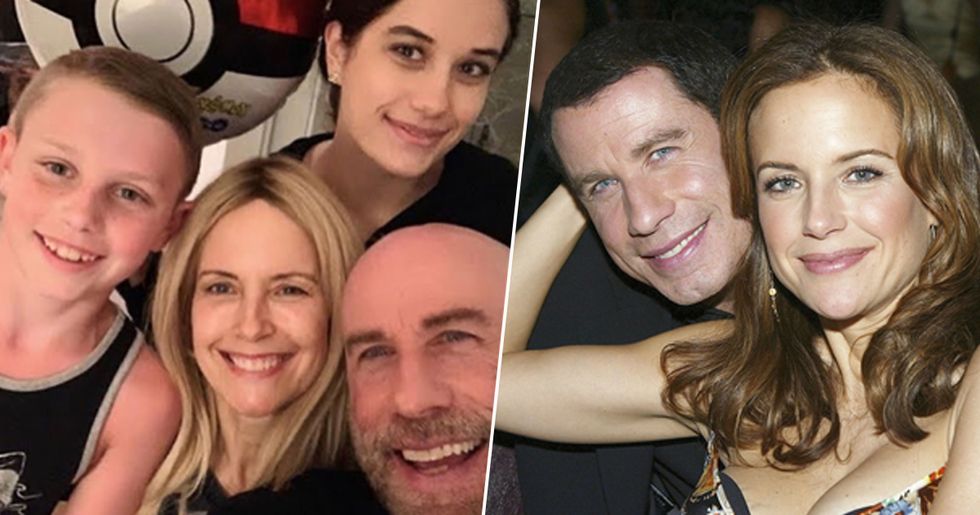 Now the iconic actor has broken a brief social media to share a family photo of his own children and rocker, Tommy Lee's, while also revealing how he's coping.

It's a heartwarming snap but you can tell that John is still grieving a lot.

John Travolta is going through an unimaginable time.

On July 13th, the actor confirmed that his wife, Kelly Preston had died, aged just fifty-seven.

They had been together for twenty-nine years...

And, in this time, they shared two children: Ella, aged twenty, and Benjamin, 9.

And they quickly became one of Hollywood's most loved couples.

But, throughout their marriage...

Kelly had helped her husband in more ways than you could imagine.

Aged only twenty-three, John was at the bedside of his first love, Diana Hyland...

When she too, died of breast cancer, just a year into their relationship.

It would be another twelve years until he met Kelly...

And their relationship would finally allow him to properly settle down and fall in love again for the first time.

John and Kelly's sixteen-year-old son, Jett, died suddenly after suffering a seizure while on vacation at Grand Bahama Island.

And, speaking in an interview in 2014, John described losing Jett as the "worst thing that’s ever happened in my life."

Kelly was suffering, too.

In an interview with Lifetime, she said: "Nobody should have to lose a child. It’s unfathomable. But I’m here to say that you can get through it. You can live again. You can want to live again."

But, despite her pain, she was a solid rock for her husband.

The couple remained strong and helped each other through the grief and, in 2011, they announced the birth of their baby, Benjamin.

Benjamin brought the Travolta's a new lease of life...

And, together, John and Kelly were able to move on from their grief.

So, of course, Kelly's death this month came as a huge shock...

And it has left a huge hole in John's life.

He wrote: "It is with a very heavy heart that I inform you that my beautiful wife, Kelly, has lost her two-year battle with breast cancer. She fought a courageous fight with the love and support of so many."

He informed his fans that he would be taking some time to grieve with his children.

"Kelly’s love and life will always be remembered. I will be taking some time to be there for my children who have lost their mother, so forgive me in advance if you don’t hear from us for a while.  But please know that I will feel your outpouring of love in the weeks and months ahead as we heal."

Since his message, the actor remained very quiet on social media...

But then, reports came in about his involvement in the church of Scientology.

Now, both Kelly and John have been known for their ties to the controversial religion.

In a 2009 interview, Kelly opened up about how her belief in Scientology helped her to deal with the untimely death of her teenage son.

"In Scientology, we have what’s called 'auditing,' and that helps you to address things in your life and to strip them away. It’s a path of spiritual enlightenment. Also, it helps rid the mind of painful experience completely. Through that, the people at my church literally held my hand and got me through… I will forever be indebted."

But following on from her death, John is reportedly looking into quitting the religion altogether.

According to the Daily Mail, the actor is facing a "make-or-break" moment over his forty-five-year devotion to Scientology because he defied the Church’s opposition to cancer treatments.

The founder of the religion was famously opposed to both chemotherapy and radiation...

But other Scientology members have praised John for attempting to break away from the church.

Ex-member and open critic, Jeffrey Augustine, says that John's Instagram announcement was enough evidence to show he was leaving the religion.

He said: "The statement was unequivocal in the support of medical staff... It shows they've backed away from Scientology."

The actor is yet to address the allegations himself...

However he has paid tribute to his late wife by dancing with their daughter. Dancing, John says, was one of Kelly's favorite things to do in the world.

It's a beautiful tribute.

My daughter @ella.travolta and I dancing in memory of momma. One of Kelly's favorite things, dancing with me.

And now John has broken a brief social media silence.

And he's done so sharing a beautiful snap of his family with Tommy Lee's family too.

John's smiling but he's obviously still in so much pain. Stay strong!