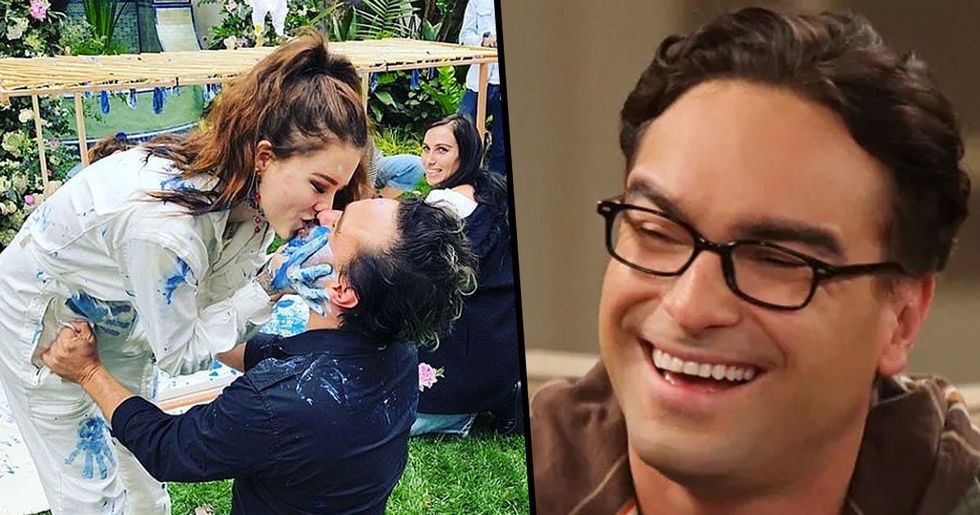 You will probably know Johnny Galecki as the geeky physicist, Leonard Hofstadter, from CBS's Big Bang Theory, which premiered over a decade ago.

But, as the show closes its doors after 12 years, the actor has revealed that he and his model girlfriend, Alaina Meyer, are expecting their first child after the star posted a picture from their gender reveal party on his Instagram.

Galecki, 44, is best known for his role in the sitcom, The Big Bang Theory.

Galecki made his acting debut in 1987, in CBS's Murder Obtained. However, the star is best known for his role as Leonard Hofstadter in the popular sitcom, The Big Bang Theory.

You know. This guy:

Who is Alaina Meyer?

Alaina Meyer is a San Diego-born model. At the age of 22, she is more than two decades younger than Galecki.

Meyer worked as a fabricator manager before beginning her modeling career.

Now, she works as a model with many different well-known brands.

Meyer's father was a member of the U.S. Army Special Forces

He also served in the Vietnam War as a Green Beret. However, while her dad has obviously done plenty of traveling, Meyer herself has not — at least, not until rather recently.

Apparently, her first trip out of the U.S. didn't take place until 2017.

According to E! News, Meyer's September 2017 trip to Norway marked the first time this model traveled outside of the U.S. What an amazing first trip!

The pair made it official last year.

Although it's unclear when the couple started dating officially, they went public with their relationship last year, posting romantic snaps on their Instagrams over the summer.

Since making it Instagram-official, the pair made their red-carpet debut in November of last year.

Their big couple's debut took place at the E! People’s Choice Awards 2018 in Santa Monica, California. As you can see, they totally slayed.

They even have matching tattoos...

In September, the pair got matching tattoos of each other's initials — Meyer's arm has "JG" written in block letters and Galecki's tattoo says "AMM," with a heart underneath.

Alaina Meyer uploaded a picture of her the new ink to Instagram, writing: "Gone country and branded by babe."

Tattooing someone else's initials on your skin is definitely a sign of commitment. But you know what else is? Having a baby together! Speaking of which...

After publicly dating for just under a year, Galecki announced earlier this month that he and his girlfriend are expecting their first child.

Galecki announced the pregnancy on May 3, writing: "We are absolutely over the moon to announce that we will soon be welcoming a little one into this crazy and wonderful world."

The couple also requested privacy during this exciting time.

Yesterday, the couple posted pictures from their paint-themed gender reveal party, announcing the sex of their child. So, is it a girl or a boy? Read on to find out...

The actor's Big Bang Theory co-stars have been congratulating the couple on the news.

Soon after Galecki announced the pregnancy, his co-stars rushed to his Instagram to congratulate the mom- and dad-to-be.

Obviously, the whole Big Bang Theory cast was super excited for their friend and co-star.

Melissa Rauch, who plays Bernadette Rostenkowski-Wolowitz on the show, replied to the post with a row of heart emojis, while Kevin Sussman, who plays Stuart Bloom posted: "Mazel Tov!"

So, now for the real question:

Is it a boy or a girl for the happy couple? Obviously, we'll be happy either way, but we really want to know!

Luckily, we have the answer!

Over the Memorial Day weekend, the couple hosted a paint party for family and close friends to reveal the gender of their baby.

Posting on Instagram, the couple is seen splashed with blue paint.

Revealing that, yep, they're having a boy!

We're all for getting a little bit messy — especially when there's such a good reason to do so! If you're considering hosting your own gender reveal party, maybe add paint to the list of possibilities!

Hooray! We couldn't be happier for them!

Meyer wrote: "I cannot wait to raise a baby boy with my love. He will follow in his father's footsteps of being a generous, loving, chivalrous fellow."

He wrote that the gender reveal party was a "day he'll never forget." Which makes total sense — it's the day he learned he'll soon be welcoming a little baby son into the world!

The future mom and dad aren't the only ones who are excited about the news.

In addition to Galecki, Meyer, and all the stars of The Big Bang Theory, we are also totally stoked for this little bundle of joy to join the human population!

Interestingly enough, Galecki previously joked that he was hoping for a girl...

Johnny Galecki reveals he hopes to have a girl as first child: Before the penultimate episode of The Big Bang Theor… https://t.co/nvc6PNgJIC
— RushReads (@RushReads)1557450693.0

When appearing on The Talk earlier this month with pink-painted nails, the star said: "I got superstitious that I was, like, manifesting a boy, when I kind of prefer a girl."

The actor's pink nails didn't seem to do the trick...

But his recent social media posts show that he couldn't be happier to be expecting a boy. While it's not uncommon for a soon-to-be parent to say they prefer one sex over another, we all know that they love the baby no matter what. And this baby boy is going to be so adored by so many!

The couple's baby is due later this year.

Although the specific due date is unclear, Galecki announced that his son will be due "later this year."

Needless to say, we're counting down the days.

Just as we're sure Galecki and Meyer are doing! Plenty of babies will be born in 2019, but you can't blame us for being a little extra excited about this little boy in particular.

No pressure, or anything. Do you think they've considered naming him Sheldon? Or Raj? Or Howard?

We think "Leonard" would make a pretty fab middle name.

Just saying! What a cool way to honor a character you've played for more than a decade, right? Whatever name Galecki and Meyer choose for their son, we can't wait 'til he's here! We're sure they're counting down the days as well.

Now that Big Bang Theory has come to an end and the stars are all grown up, let's reminisce.

Let's catch up with what the stars of the show looked like in the final season compared to season one. Keep scrolling for some serious flashbacks.